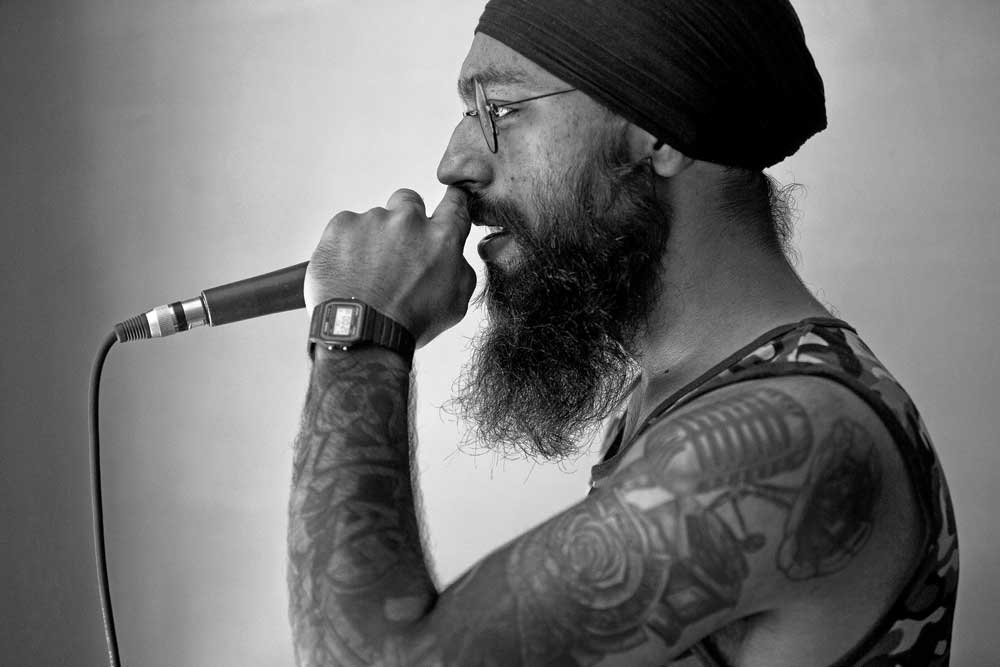 IT’S EARLY EVENING on a Saturday. Hauz Khas Village—even on a dry day, even before the sun has sunk—has an irrationally festive atmosphere. Contemporary Bollywood songs, designed to trick listeners into dancing, blare through the street. Young people, not yet adults, jive goofily on terraces, on dance-floors, on balconies. An unseasonal wind has struck Delhi; the trees seem to be swaying to the rhythms too. It’s just your average day in the Village. Each restaurant or pub has employees stationed outside, on the road, welcoming prospective patrons, tempting them with one-plus-one offers. One such man is even wearing a cape—if there’s one thing this writer has learnt over the years, it’s to walk away silently and let the man in a cape do his business as he deems fit.

“Can I tell you a secret?” asks Prabh Deep Sagar, a little later. We’re at Raasta (named after the Jamaican religion, not the Hindi word for ‘route’), one of the many pubs in the area. Prabh, 23, is a gifted young wordsmith, a rapper telling his stories in Punjabi, with the occasional English melody or line thrown in. He has accumulated a loyal fan following on the back of his dynamic delivery. ‘G Maane’, a song he put out last year, garnered him plenty of new listeners.

On this particular day, Prabh has just finished an event he was hosting at Raasta, called Spit Dope Inc X Introduce Yourself. It was a cipher (a freestyle rap session), with a couple of battles thrown in, as well as a workshop for aspiring hip- hop stars of the future. Prabh, dressed in a nondescript black-and-white polo T-shirt and jeans, was the centre of attention— kids accost him for selfies; imploring him to check out their new track. Prabh’s response is polite but firm: “Keep working at it. If it’s good enough, I’ll get to hear it anyway.” The crowd of over a hundred is dressed in appropriate attire: chains attached to wallets, baggy jeans, oversized basketball jerseys, tilted caps, bandanas tied in reverse, eye-catching sneakers, and seem possessed by a sense of hopefulness and belonging.

He goes on: “I’m telling you this thing that no one knows.” He has a glint in his eye, which I can see through his glasses. “Prabh Deep,” he says, “doesn’t know his own style of rapping. I don’t know my technical skill. I don’t know all these rhyme schemes, syllables, this or that. I just write. It comes from my heart. It’s in my blood.”

His entry into the world of hip-hop dates back ten years or so ago, when he was barely a teen. Prabh and Happu, his childhood friend—“he’s more than a brother to me,”—had gone jogging one morning, at 6am, in Tilak Nagar in west Delhi. They chanced upon this group of guys practicing their hip-hop moves. Instantly, Prabh was inspired. It was a kind of awakening for him. “I met these guys, and one of the reasons I connected with them was because they were from a financially poor background. I, too, have grown up in a lower-middle class family, and back in the day, things were really bad as well. We were poor. I could connect with these guys… I was like, ‘That’s what I want to do.’ Hip-hop, for me, is about survival. It’s about me being on stage and having fun.”

I don’t know all these rhyme schemes, syllables, this or that. I just write. It comes from my heart. It’s in my blood

UNDERGROUND HIP-HOP in India, today, has found its voice. Artists such as Divine and Naezy, who’ve been at the forefront of the gully rap movement in Mumbai, are slowly inching toward the mainstream, while it’s a style that’s been embraced by Bollywood as well, thanks in no small part to the success of Honey Singh. But really, it’s a movement that has been pulled up by the bootstraps by the fans and artists themselves, through a DIY commitment to their craft and a focus on ‘authentic’ stories. Many of the artists narrate their experiences of growing up on the streets—not the ‘hood’, like its Western counterpart— and tackle social issues that affect us all. Underneath the mainstream obsession with hedonism—the vodka and the promiscuity and the big cars—lie real stories. It’s safe to say that hip-hop cuts across class boundaries, helping kids discover a sense of self through not just the music but the entire hip-hop lifestyle—the camaraderie, the one-upmanship and playful ribbing, the style and the lingo.

Prabh, who’s currently working on his debut album called Class-Sikh (the first single, ‘Kal (Future)’, came out on May 15th) with producer and collaborator Sez (Sajeel Kapoor), spits out, in verse, his experiences of growing up. Living in Tilak Nagar, he tells me about the debilitating impact of drugs in his neighbourhood. Well-connected dealers operate just a couple of blocks from where he lives, and he’s seen many childhood friends suffer from addiction. He has lost friends to this, and he recalls a kid in his neighbourhood—“He didn’t even curse, you know,”—who eventually succumbed to an overdose.

Further, Prabh has also lived in precarious financial conditions, all the while knowing that he’s different. That he didn’t quite fit in. That he was meant to do something different. It’s a realisation that so many people around us take a lifetime to reach; Prabh tells me about his own friends and cousins who went through the grind, and are now unhappy with their life choices. “They’re fucked in the head. They can’t do what they like.” He, though, found his calling early on. After attending a few ciphers and other hip-hop events in the city, after watching Snoop Dogg perform in Gurgaon, Prabh had his life-plan charted out.

He was always a bright student, he tells me, but he decided to drop out. He gave his Class XII board exams only as a formality, leaving the sheets either empty, or scribbling poetry on them. “I got three marks out of 100 in one paper,” he says with a laugh. “And I have no idea how! I think I wrote down song lyrics in it.” He had developed an interest in break dancing, and b-boying became his hobby. Over time he couldn’t quite connect with the form, but he remained a part of the city’s hip-hop community, building up a network and staying friends with the people.

I have grown up in a lower-middle class family. Hip-hop, for me, is about survival. It’s about me being on stage and having fun

After dropping out from school, Prabh started working at a readymade garments shop as a salesman. He wasn’t making much—Rs3,000 a month—but it was a learning experience and he supported his family with that money. He then worked at a call centre, and moved up the ladder quickly. He was doing well, and also blowing up money at the time, but the satisfaction he craved was lacking. So he quit, joining a different call centre for a sixth of the salary.

During this period, on a friend’s insistence, Prabh recorded a verse, rapping about his life at a call centre. It sparked something in him, and he quit his job for music. And thus began his life as a rapper.

These stories form the heart of Class-Sikh. Prabh narrates a verse from one of the songs on the album, and he’s kind enough to translate it for my benefit. It’s about the “eight-to-two” daily grind, and goes, ‘Bachiya ne jaana school/ aath-toh-do/ yaad bhi ni kal/ kuch padeya jo’. The words, really, are about him sticking it to the system. They’re about him standing apart, flipping off the educational system, which he feels doesn’t care for the individual inclinations of the students. “I’m standing on the other side, showing you the middle finger. Fuck this school, fuck everybody. You can’t,” he explains, “put a monkey and a fish in the same classroom, test them the same way. Me, I’m educated morally, not formally.”

He speaks of his penchant for concept-based albums—“I needed to find a way to turn this into a ‘story’. For me, an album isn’t just a compilation of songs, it’s about the message, the story behind it,” he says—and how he’s structured it in two halves. The first section talks about his childhood, how he grew up, the disillusionment he felt as a misfit inside an all-consuming machine. “It’s me in the streets. How I see things, how I see people.” A lot of it is personal; it is directly informed by his own concerns and anxieties, and how he grew to accept them. The second half of the album deals with our professional lives where, once more, Prabh realised that he didn’t fit in. He reveals a kind of self-awareness, where the album serves as a document of his own growth as an artist and an individual. He has a clear idea of the future, with a powerful concept already in place for his next two albums. He doesn’t want to reveal the details on record, but it deals with deeply political subjects and he intends to tackle it head on.

In addition to his own music, Prabh is very much part of the hip-hop ‘scene’, the community, the brotherhood of hip-hop. It’s something he places considerable importance on, constantly organising gigs and events and pushing younger artists to do better. He has been organising ‘Introduce Yourself’, a series of diverse hip-hop events—ciphers, workshops, rap battles, meet-ups. He wants Introduce Yourself to become a regular gig series, where well-known artists from the scene perform. The first edition of this reworked format will be held on May 26th, with Prabh will feature on the bill too.

He emphasises the need to remain humble, refusing to take any credit for promoting the hip-hop scene in Delhi and declining ego massages that are served up all too easily. He wants to grow only in a way where he can retain his integrity. He feels a strong sense of loyalty to the people who’ve supported him and worked with him to the point where he’s turned down major opportunities to work in the mainstream in favour of a more organic growth. “The reason I’m blowing up right is the love my people are giving me. It’s not like I have lots of money, but I’m happy where I am.” That said, it’s not like he’s allergic to commercial success either. It’s where he wants to eventually end up, but only on his terms, on his conditions. “Make sure you make money out of it,” he says. “You can’t just sit and say, ‘I’m doing it for the love of it.’ It’s not true. That’s bullshit.”