The abstract romanticism of Manu Parekh 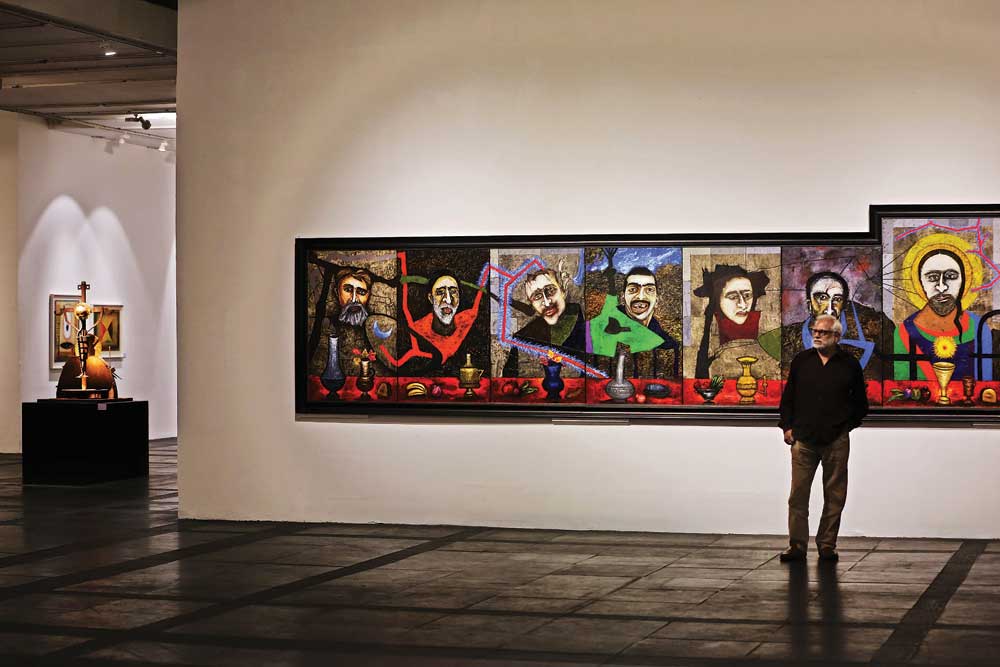 “ORIGINALITY IS bullshit.” There is conviction and whimsy in the words of the bespectacled man who sits in front of me. Comfortable in his spacious living room at his Chittaranjan Park home, surrounded by stacks of canvases in a corner and piles of books in another, Manu Parekh slowly stirs his tea. He waits for a reaction and then adds with a laugh, “People in India are too stuck up about originality. Picasso had something to say about originality: ‘Good artists copy, great artists steal.’ Kaafi haraami thha woh (He was a jerk). But he opened up art for the rest of the world.” It’s rare to catch an artist off guard, especially when accosted by a barrage of questions. It’s much easier, though, to find a performer, unbridled with his words and impetuous with his emotions.

And Parekh, by his own admission, is more of a performer.

We meet after a hasty introduction at National Gallery of Modern Art (NGMA). At the gallery, the man walked along the halls, dwarfed, almost, by the scale of his work, which spans six decades. His first retrospective, titled ‘Manu Parekh: Sixty Years of Selected Works’, coincides with the release of his book by the same name (Aleph; 299 pages, Rs 2,999). At home, though, Parekh is more willing to introspect. “There, I feel like I’m viewing someone else’s works. It’s overwhelming! But it’s the little things that I draw from every work, the little things that I went through since I was a child. It’s those stories that matter to me the most,” he says.

Parekh was born in 1939 in Ahmedabad, Gujarat. His earliest memory of engaging with art is as a Class IV student in a municipal school. “There was only one teacher to teach all the subjects and he didn’t know drawing. I knew some things. So I started taking drawing classes. I would decide what to draw for the class so that the other kids could copy. In fact, after JJ [School of Art], I even went back home and taught art to that teacher. He passed two exams!” he says with a laugh. “I guess I always had that consciousness that I wanted to stay in this line.”

As opposed to his experience with his first teacher, Parekh has had fulfilling relationships with his mentors, which drive him even now. In high school, he was introduced to his teacher Mukund Shroff, who gave him his resolve to study art. His other influence was SB Palsikar, his teacher at Sir JJ School of Art. “Teachers have a great role in one’s life; this guru-shishya parampara with Mukund, especially, has had a great influence on me,” he says. As for Palsikar, he points to The Dancer, a watercolour-on-paper dated 1960—a simple portrait of a dancer in a sari, holding a dove, reminiscent of miniature paintings. “This is my fifth-year work. Palsikar has had students like [VS] Gaitonde and Tyeb Mehta. You will see his influence in The Dancer. He had old-school sensibilities, and he himself was deeply influenced by miniature painting. Hence, you will find pieces of him in my earliest works.”

Bombay in the 60s sparked Parekh’s evolution as an artist. And it all began with Michelangelo.

In his third year, he was made to copy the Italian artist’s work. “I’m from Ahmedabad, from a typical middle-class family. I didn’t know English. I didn’t know anything about Italy. Michelangelo se mera kya matlab hai? (What has Michelangelo got to do with me?) I used to wonder how this information is relevant to me. If they had asked me to draw Natraj, I would have been able to connect the dots. And so I grew more and more anxious about art education, so much so that in the fifth year, I protested and didn’t give my exam.” But he eventually did, urged by his mother.

This, however, led to his line of inquiry. “Modernity should be Indian also. When we create modern art, it should be Indian modern art. I struggled my whole life with that issue, and you can see that struggle in my body of work at NGMA,” he says. He refers to the Bombay when the Progressive Artists’ Group (PAG) reigned over the Indian art scene. Art work and criticism were heavily Westernised— PAG’s founders and members, such as SH Raza, FN Souza and MF Husain, had studied abroad and had imbibed European Modernism that paved the way for Modernism in India. Forms such as Souza’s expressionism and abstractionism of Gaitonde and Raza gave way to a new language. “Bombay was the epicenter of this movement. The rich went out and saw the museums. Back in the classroom, I was stubborn about this change. However, I found myself getting influenced by Paul Klee. And the funny part is that I didn’t even know how big an artist Klee was at the time. I saw his reproductions and the folk elements, primitive and childlike in his drawings, resonated with me. I saw that folk as a rich heritage that we haven’t used in modernism. I wanted to join them together,” he says.

The Bauhaus movement, of which the Swiss-German artist was a prominent part and which derives from craft and fine arts, showed in Parekh’s future works—from the cubist structures of his ‘Head’ series, to the simplicity of folk elements in works such as Three Figures and Three Heads. Colours took possession of him and the idea of ‘cool romanticism of abstraction’ translated on to his canvas. Klee’s presence remained when his young wife, Madhavi, told him she wants to learn painting in 1964. Engaged at the age of 12 (while she was nine) and married at the age of 18 (she was 15), Parekh initiated Madhavi into art, starting, inevitably, with Klee’s pedagogical exercises. “Her father was a Gandhian. And I always found Klee to have the same Gandhian sensibilities. So I told her stories accordingly, about his small-sized works, his attention to detail while captioning and experimenting with materials,” he says.

His work underwent a stark shift when he moved to Calcutta. In Bombay, after graduation he had joined the Weavers’ Service Centre as an art designer in 1963. In 1965, he got transferred to Calcutta. “In my organisation, they used to call Calcutta ‘Kala Paani’. But I was so comfortable that within a week, I became a Calcuttan,” he says. He knew Calcutta through the works of Rabindranath Tagore—his literary works and art had left a big impact on him. In his younger days he had even acted in Muktadhara, a Gujarati adaptation of Tagore’s play. He is an ardent fan of Bengali films. He joined the Society of Contemporary Artists, led by Shyamal Dutta Ray, of which he has been a member for 45 years now. “In Calcutta, there was a very good system of having those chai addas, where theatre people, artists and filmmakers would meet and talk,” he says. The shift in his gaze can be charted through his works such as the Image of Cal series, with dark, broody shades and geometric forms giving way to abstract figures.

A keen observer will not miss the theatrics in Parekh’s art. That is perhaps because he had, at one point, drowned himself in theatre and films. “I love films and theatre. And I especially love acting,” he says. As a child, he would often head to the theatres to watch movies with his father. “In India, everybody does, right? Movies are the only source of entertainment,” he says. Sohrab Modi and V Shantaram epitomised Indian cinema for him. “Oh, Amitabh Bachchan is nothing in front of them in terms of baritone and dialogue delivery,” he reminisces. “There used to be three gun shots and that’s how the curtains would open.”

Between the ages of 21 and 24, Parekh participated in inter-college theatre productions with directors such as Taarak Mehta, the Gujarati playwright who directed him in several plays such as Baar Warse Baawo Bolo. In Ahmedabad, he also performed plays with Jaswant Thakkar of Indian People’s Theatre Association. His fondest memory is that of playing an 80-year-old in Muktadhara, for which he designed the set as well. He also remembers holding rehearsals for visitors such as Prithviraj Kapoor and Balraj Sahni. “That was the last time I acted. Although my daughter Manisha says I continue to do so,” he says with a laugh. The drama inevitably trickles down to his work. He talks about approaching his Banaras series with the eye of a set designer, while the Heads series take on the gaze of an actor, complete with expressions and moods, reflected in the fine creases and colours.

Influences of the folk and rural have been a leitmotif of his work. From visiting his grandmother in Mahudha village as a child, to visiting his then teenage wife in Sanjay village, in Gujarat, Parekh developed a much deeper understanding of folk art during his employment with Weavers’ Service Centre, then headed by Pupul Jayakar. The handloom corporation, at the time, had artists such as Arpita Singh, KG Subramanyan and Jeram Patel working for it. He visited rural belts in Bihar, Orissa and Rajasthan, and documented the traditional crafts such as Ikat and Madhubani. “The work that came out of this time is one that paved the way for today’s generation. We created a bridge. I worked with Ganga Devi, the folk painter, and Bhaskar Kulkarni, who brought folk art from mud walls to paper to people’s houses. This was the great revolution,” he says.

Apart from his keen interest in indigenous art, he was also curious about studying rural women. Feisty, independent and outspoken, they caught his imagination, and continue to do so. “Have you seen Mother India?” he asks, “That’s the true picture of India even today. The man runs away, a helpless soul who can’t take responsibilities, and the woman stands up and takes care of everything.” He adds, “I have always seen women as complex but moorkh (foolish) creatures, because they make the mistake of putting men on a pedestal. I love studying women. I just can’t live without them. I believe that an empowered woman is great company rather than a threat,” he says, impishly stealing a glance at his wife working in the kitchen. But where, then, are the women in his work, we ask. “They do not exist in my art,” he says, “even in my Head series, there are very few women. I did that deliberately. I don’t want that abstraction around women to die. There are things that I do not understand even now, but I would not want to demystify them by putting them on my canvas.”

The roster of leading artists in India today includes names like Jitish Kallat, Sudarshan Shetty and Atul Dodiya. But Parekh is unfazed. “I feel no competition. I think it’s because of my daughter. I remember a senior artist once cribbed about how the younger ones are overtaking. But I told him, why not? We should be paving the way for our children. They have a different language, and an experimental mind. Avenues have changed and even I enjoy making use of it,” he says.

Where, then, does he see himself in the coming years? “In 1962, Madhvi and I put some of our stuff in a gunny bag and walked towards a path we didn’t even know existed. Today, I have 60 years of work showing in the same city as Madhvi’s, who will show 50 years of her work [at Delhi Art Gallery, starting September 20th]. Right now, I just want to acknowledge this accomplishment,” Parekh says.

(‘Manu Parekh: Sixty Years of Selected Works’ is on at NGMA till September 24th)