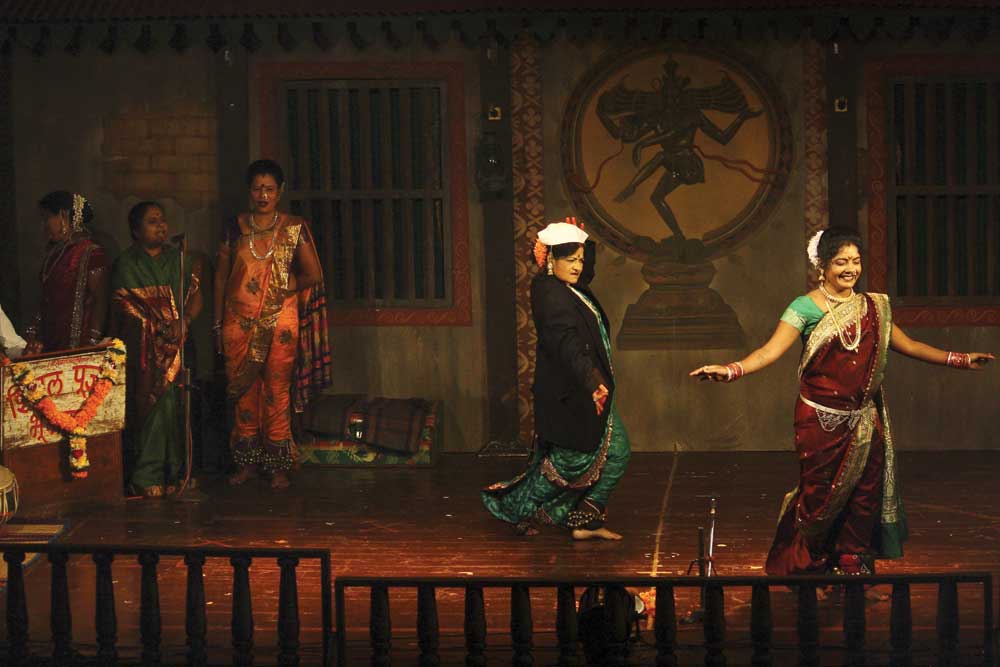 “WHERE ARE my ghungroos, aai? I’m getting late.” This has been Megha Ghadge’s regular early morning rant from the age of eight. Growing up in a 10-by-10 chawl, in the BMC quarters of Crawford market, she has always had restless feet. “Every time a song would play on the loudspeakers in my area, I would meditate in that spot. My eyes would be shut and I’d move like I was one with the beat,” she says. But it was at the age of 12 that her life changed. The lead Lavani performer in her group had taken ill. It was a performance inside the popular Sai Baba temple in Shirdi and the audience was getting impatient. Her guruji tied the ghungroos for her that evening and sent her on stage with zero preparation.

“You can do it,” he said with confidence. “When I came backstage with tears in my eyes post the performance, all I could hear was ‘Once more’.” Today Ghadge is a leading Lavani dancer and Marathi actor in the country, who says that her 30-year journey has been empowering, more than anything else. “My father used to work as an officer at Mantralaya and he was tortured for years because I chose to be a Lavani dancer.” ‘Yeh ladki ko kahaan bhej diya?’ (Look where your daughter is headed) his colleagues would often taunt him. Once during a political function one of the netas humiliated her father on stage. “That’s the day I told myself that I would change the way people perceived Lavani,” she says.

Pioneers like Ghadge have been able to break free of the middle-class derision Lavani is often subjected to. Here is a 13th-century Maharashtrian art form, spurning the shadows of its past. It has been tagged ‘evocative’, ‘provocative’, even ‘subversive’ — qualifications that have often prevented Lavani dancers from reaching their true potential. A recent Lavani Live festival at the Godrej India Culture Lab put a mirror to many of these misconceptions about the art form. Those who thought the dance form needed resuscitation were in for a pleasant surprise.

Sejal Yadav, curator of the festival, and a PhD research scholar at Jawaharlal Nehru University, Delhi, is one of the contemporary faces of the art form. She is not only working on the politics of the performance of Lavani, as part of her thesis, but hailing from a maternal lineage of classical performers and folk artistes, she is also a dancer. She has decided to carve a truthful, free-from-judgment image of Lavani. “In 1948, Balasaheb Kher, the then Chief Minister of Maharashtra, imposed a ban on Lavani and Tamasha performances in Bombay since they were considered to be lascivious and obscene for public entertainment. Since then, we observe that Andharatil Lavani (Lavani for the Dark) is not performed anymore, due to its bold commentary on subjects like heterosexual erotica, sexual positions and foreplay which were decried as being too ‘immoral and inappropriate’ for public entertainment. Few people understand that Lavani is an agile form of a performative text. It embraces the past, present and the future through its unique language of performance, no matter what the subject,” she says.

In Chhabi, a documentary film about a male Lavani performer, Anil Hankare moves to the lyrics Majhya ooosala lagal kohla ga…. (‘A fox is about to attack my sugarcane…’). When I meet Hankare, he is busy adding a third layer of maroon to his lips. It is impossible to believe that sitting in front of me, in a stunning gold navari sari, is the father of two 20-year- olds. He looks into the mirror practicing his expressions. A nip on the side of the lip and a slight twitch of an eyebrow conveys why he burns up the stage every time he goes on it.

“I was 18 when I saw an ad in a newspaper about a troupe that was looking for dancers, and since then I have been performing Lavani. I enjoy dressing up as a woman, and it has nothing to do with my sexuality. During the Peshwa era, men used to dress up as women all the time, because women weren’t allowed to wear the gunghroo. Today, when we do it by choice, it becomes a reason for people to judge us. Why?” he asks.

He says male members in the audience have slashed wrists and showered notes on him, besotted by his performance on stage. “Aankhon ke ishaare se maloom hona chaahiye aap kya chaahte ho (They should know by the expression in your eyes what you want),” he says. From teaching Madhuri Dixit her Lavani moves in the popular Bollywood number, Humko Aaj Kal Hai Intezaar in the 90s, to conducting regular dance workshops for over 2,000 students today, Hankare has dedicated the better part of his life to keeping the light of Lavani alive.

“It’s never easy for a man to believe that he is in a woman’s body and act with that grace. It’s taken me years, but now I know I can switch on for those three hours where nobody would believe I am a man, even if they know it’s me,” he says. His initiative, ‘Bin Baykancha Tamasha’ (Tamasha without women) challenged the age-old notion of women entertaining a group of men. “It’s happened all through history, from mujras to Lavani performances to many other performances where men are just spectators. When I introduced ‘Bin Baykancha Tamasha’, I was performing for a group of women only. They were hooting, throwing cash at us, and even dancing with us. Now that’s the power of Lavani. It’s supposed to be entertaining irrespective of your gender. ” he says.

The beauty of Lavani is that everyone associated with it is trying, in their own little way, to educate today’s generation about why it has survived this long. The devotion of the dancers helps them deal with challenges. Like the Sangeet Bari Lavani, which is a more theatrical form of the performance, but for private patrons, and is seldom spoken about. “Historically the performances of the Sangeet Bari are marked by the Daullat jadda, where rich male patrons ask the nachee (Lavani dancer) to perform a song of their own choice in a private, intimate setting. These dancers are usually Kolhati women who do not marry and the men in their community are often economically dependent on them. Many of them prefer to stay as life-long mistresses of their patron who may or may not grant them the permission to continue dancing,” says Yadav. Even today there are various groups of Sangeet Bari performers who live together and have their own private Lavani showings.

Filmmaker and writer Savitri Medhatul and her partner Bhushan Korgaonkar are trying to throw light on artists who belong to this group. “We have regular Sangeet Bari shows and Lavani workshops from time to time, and our motive is to educate people who still believe that Lavani carries a stigma. The women who belong to the Sangeet Bari tradition, each one of them have a very tough life because they are never given the status of an actual artiste. The system they are in unfortunately brackets them as unmarried wives, and can never see beyond that. But the same art form that bogs them into a bracket also empowers them in some way and it’s important to understand that,” says Medhatul whose documentary Natale Tumchyasathi follows the lives of these performers.

Today the influence of Lavani can be seen in various mediums from Bollywood films to dance reality shows to YouTube videos.

Purists may argue about the ‘authenticity’ of cinema depictions, but for those who are working to divest Lavani of its stigma, any inspiration the form provides should be embraced. “The fact is that if Bajiro Mastani did not have a Pinga song, with two leading actresses dancing in it, many youngsters would not have even known of Lavani. It was a very loosely inspired version, but it was at least something. Dadasaheb Phalke (who made India’s first full-length feature Raja Harishchandra) captured Lavani on film in its purest sense, and today people take inspiration from it in their own way. Of course, there will always be a debate over exploiting the interactive nature of it, and keeping away its traditional essence, but that’s the case with anything contemporary,” says filmmaker Rajesh Mapuskar whose film Ferrari Ki Sawaari became popular thanks to its Lavani number Mala Jau De with Vidya Balan.

The best example of Lavani used in a contemporary context is a video called The Amorous Adventurous of Shakku and Megha in Valley of Consent by director Paromita Vohra. Here, two women dressed in full-blown Lavani attire debate the concept of consent in today’s time. Ghadge, who plays one of the protagonists in the video, says, “My responsibility is to get people to understand what Lavani really is and how not to look at it as a taboo. If parents proudly say ‘My daughter learns Kathak’ or ‘Bharatanatyam’, they should be equally proud of their daughters for learning Lavani. There’s a line in a song: Asel kothe rutla katla majha talpayat… (Where are you, there’s a thorn in my leg, I need you to come caress it). That’s what Lavani is, a sigh of relief in our mad lives. When my audience walks in, I ask them to keep their societal selves outside. Doctors, engineers, lawyers, it doesn’t matter to me. When they are watching me perform, they should just be themselves. They should want to come dance with me,” she says.