×
Features | Art: Inside the Studio

Jogen Chowdhury prefers spontaneity to deftness in his ‘throbbing lines’ 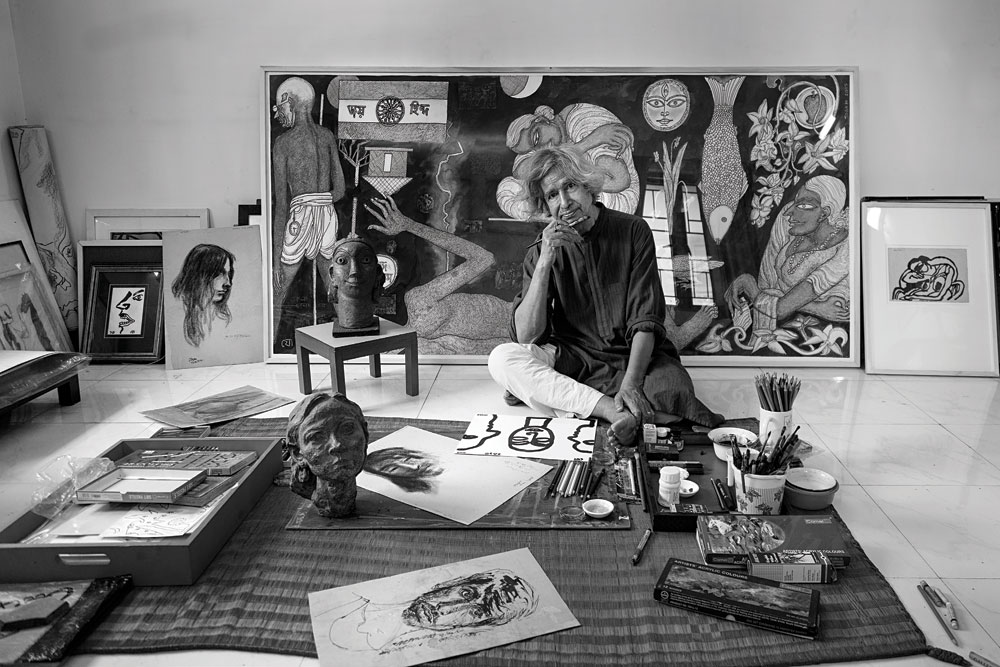 
I LIKE THE LATE Somnath Hore, who was 18 years his senior, Jogen Chowdhury’s physique has always been long and lean. His silver bob-cut hair and moustache are the only visible attributes that attest to his advanced age. His energy, effusiveness and lucidity seem uncanny for someone who has freshly touched 80. On one wall on the first floor of the Kolkata Center for Creativity hangs a cluster of Chowdhury’s self-portraits. His profile reappears in each one as if unaltered by time.

Upstairs, on the second floor of his ongoing retrospective, Reverie and Reality, curated by Ranjit Hoskote, I immerse myself in old photographs from his personal archives that occupy a section of a wall. I pause at a shot of him with the artist Himmat Shah, now 86. The two suited men look supremely dapper, even though Shah’s eyes are awkwardly closed. The photograph must have been taken around 1965, possibly in winter, when Chowdhury was recently enrolled as a student at the prestigious Ecole Nationale Superieure des Beaux-Arts, Paris. Chowdhury harks back to the photograph during our subsequent conversation. “[Himmat] inspired me to go to Paris but joined me after six months for six months,” he said. As he reminisces about their friendship, he finds himself talking about another close late contemporary. “Manjit [Bawa] and me were together from the beginning,” he said. “He came [to Delhi] from London, I came from Madras to Delhi. It was at the same time. He saw my work, liked it and so we became friendly.” Chowdhury is referring to 1972, when he moved to the Capital, having accepted a position as keeper of the Rashtrapati Bhavan art collection. Both men were then in their 30s. “[Manjit] had an old green scooter. He was staying behind Rashtrapati Bhawan, at Rajendra Nagar. He had an old house where he lived on the first floor with his wife, son and daughter. Manjit was always on the scooter. I used to sit behind him and we were always talking, saying, ‘One day we will be known.’”


Walking through Hoskote’s considerately produced retrospective, one gets an unprecedented glimpse into Chowdhury’s practice when it was still nascent, before he would come to be “known”. The biggest revelations are clusters of studies from his time as a student at the Government College of Arts and Craft, Kolkata, and the Ecole in Paris. The draughtsmanship is prodigious. Chowdhury clearly excelled at academic realism, despite the absence of prior training or exposure. It is indeed fascinating to observe the unexpected transition he eventually makes from painting perfect figures to composing consciously distorted ones. When I ask him how he chartered such a movement away from that level of skilled figuration, he tells me about his relationship with line and his journey from adopting a mimetic strategy to seeking transcendence through vibration. “I had no particular training before going to art college,” he says. His only portfolio consisted of watercolours made on the blank sides of postcard photographs of Russian actors. One day he saw an art college student doing a study near Saheednagar Colony, Dhakuria, where his family had relocated from Faridpur district of Bangladesh post-Partition. It made him want to pursue art even more. In hindsight, he suspects that an artistic proclivity may have run through his blood, considering his vivid childhood memories of encountering his father’s drawings on the back of zamindari documents and his mother’s brilliance at alpona (sacred art made on the floor with rice flour paste). Chowdhury sat for the entrance exam to the Kolkata College of Art, one of the few art schools established by the British. He had no experience of how to draw by looking at an object. He observed the others around him treating their pencil a certain way, using their fingers to smudge shadings as they attempted to draw what he remembers as an “Italian Venus-type statue”. He concentrated on the object and rendered on to the half-sheet in front of him as meticulously congruous a copy as possible. He was accepted, not to the painting but the less popular sculpture department. In his first year he stood second. Hoskote has inserted into the show’s beginning one of Chowdhury’s almost anatomically perfect study of three Rajnigandha stalks. It hangs alongside a watercolour made ‘on the spot’, as a note underneath, within the frame, proudly reads.

“When you want to be perfect with the figure, you go to academic realism. I want to break that thing when I sketch,” says Jogen Chowdhury

He admits that though his observation and delineation was almost photographic, he consciously chose not to cultivate it. “I was not interested in continuing with so much discipline of draughtsmanship,” he says. “I tried to understand and realise what is art, what is not art, what is really interesting in art, what is form, space, colour, and how it is related with me and with society. Gradually, I felt the fun of texture, the fun of space…” Inspired by Degas, he began to leave a part of his compositions somewhat incomplete. He believes it held the composition in place. In Tagore’s work he discovered the power of vibratory lines that conveyed a sense of eternity and formlessness, even spirituality. “While I work, as soon as I feel something vibrates, something becomes living, I know it is important. It must have that throb. If I miss the throb, then I miss the quality of the thing. Whatever I do, it must throb.”

WHEN I ASK him if and how the line throbs differently across mediums, he sheepishly confesses that if there’s one medium whose possibilities he hasn’t in any way exhausted, it is oil. “I still have dreams to do good works, at least six or 10 works I still have to do where I am more satisfied,” he says. The dearth of time is his excuse, facilitated by the fact that all his life, when he wasn’t studying, he has always been a government employee. His first job, after graduating from Government College of Art and Craft in 1960, was as a teacher at the Howrah zilla school. In 1962 he was employed as a designer at the Handloom Board, Calcutta, where he met Himmat Shah, a colleague. When he returned from Paris, in 1968, he was appointed a textile designer at the Handloom Board in Madras. He worked as the keeper of the Rashtrapati Bhavan art collection until 1987, where he had one of the most spacious studios he’d ever had, at Ghantaghar, the clock tower. In 1987, he joined Kala Bhavan, Santiniketan, as professor of painting, where he currently lives in his capacity as professor emeritus. In 2014 he was elected as a member of the Rajya Sabha from the Trinamool Congress.

Hoskote also reminds us, in his curatorial note, about Chowdhury’s career as an institution builder, from Gallery 26 and Artists’ Forum in New Delhi in 1975 to the art museum at the Rashtrapati Bhavan to the recently unveiled four-storeyed Jogen Chowdhury Centre for Arts in Kolkata, which boasts a library, a conference room, guest rooms for visiting scholars and artists and an exhibition space.

His list of achievements coupled with work and educational experience makes for a formidable resume. But his preoccupations also perhaps offer insights into the nature of his artistic practice and his preference for certain mediums and his desire to accomplish more with oil. He describes his method as absent-minded, almost. “When I start work I forget what I’m using. Whatever I find near me, pencil or black pen or whatever, I use that only,” he says. “When I get deeply involved, I search, then I take the pastel. It becomes very easy then, there is ready colour.” Chowdhury credits his method to two sources: Tagore, who worked in a spontaneous way as an artist, without too much pre-planning; and Gopal Ghosh, his teacher during his second year at art school. “He had a small studio in a corner of the classroom. He created a working space, covering with a little board… he used to have a table, and he was working with ink and pastel.” How did these influences translate to him evolving what art historian R Sivakumar has termed an inherently ‘indigenous’ mode of artistic practice, I ask. Chowdhury maintains that for him, originality means that the source of his content would be his imagination alone.

“While I work, as soon as I feel something vibrates, something becomes living, I know it is important. It must have that throb. If I miss the throb, then I miss the quality of the thing. Whatever I do, it must throb,” says Jogen Chowdhury

“I don’t like to copy. I have seen everybody’s work. I never wanted to repeat things from other sources. I have seen European art. I was in Europe from ’65 to ’68, during that time I visited hundreds of galleries in 10 cities [including in] Italy, Germany, England, Holland and France, of course. My idea is that what is already done we should get rid of it, cross it out. Whatever I do should be original. That was the indigenous understanding.”

Indeed, there is something also very local about Chowdhury’s work, especially his many depictions of typologies of couples portraying a spectrum of scenarios, from playfully dialoguing with each other to cold stares to soft, intimate touches. A selection of his studies of refugees at the Sealdah railway station in the 1950s, on display as part of the show, show his commitment to empathy as an art-making approach. Unlike FN Souza, whom he knew well and whose practice he followed, Chowdhury’s female figures are intriguingly neither sexualised nor provocatively stationed. They are, like most of his forms, rendered vulnerable, through his texturing of skin, through radiating, unfixed lines. Bhupen Khakhar, an artist Chowdhury knew intimately, used the word ‘vulnerable’ to refer to his own rendition of figures, as well as those of Chowdhury’s and Arpita Singh’s. The category certainly holds, as Chowdhury’s gaze itself is not overly ‘masculinised’. There is fluidity and suspension of figure, and his tendency to depict loose-limbed reclining figures feels like a sculptural intervention within his paintings.

I ask him particularly about one extraordinary work in the show: a seated female figure who occupies the canvas. We can only see her back; she appears as if in between getting up and sitting down, her body is not lithe but fleshy and feels marked by age. “It is sensitively done,” he tells me. “With the cross-hatch, pastels… the posture, position, dramatisation… everything takes it to a different plane.” Chowdhury maintains that it is not the female body which is attractive but the form. Sexuality gets eroded over time, he believes. Form creates feeling, according to him. “Even the pillow has a form which creates feeling differently but the form of a crocodile’s back gives you a feeling of coarseness.”

Chowdhury’s practice, it would seem, has been marked by persistent and ongoing efforts to unlearn the academic realist mode in which he was demonstrably proficient. Hoskote has inserted into the show a few choice frames that offer a peek into Chowdhury’s sketchbooks. You see his use of panels and a certain free-flow of line. “When you want to be perfect with the figure, you go to academic realism. I want to break that thing when I sketch,” he says. “I try to make doodles and try to get interesting forms in there… I go on a search for new forms when I sketch.” A few paintings in the show bear traces of Chowdhury’s controlled experiments with abstraction. But overall, Reverie and Reality is delightfully preoccupied with the artist’s playful sculpting of line and his wilful disobedience towards realistic figuration, despite his obvious facility with drawing.