Gauri Diwakar: ‘Everything is possible in Kathak’

Gauri Diwakar combines the traditional and the modern 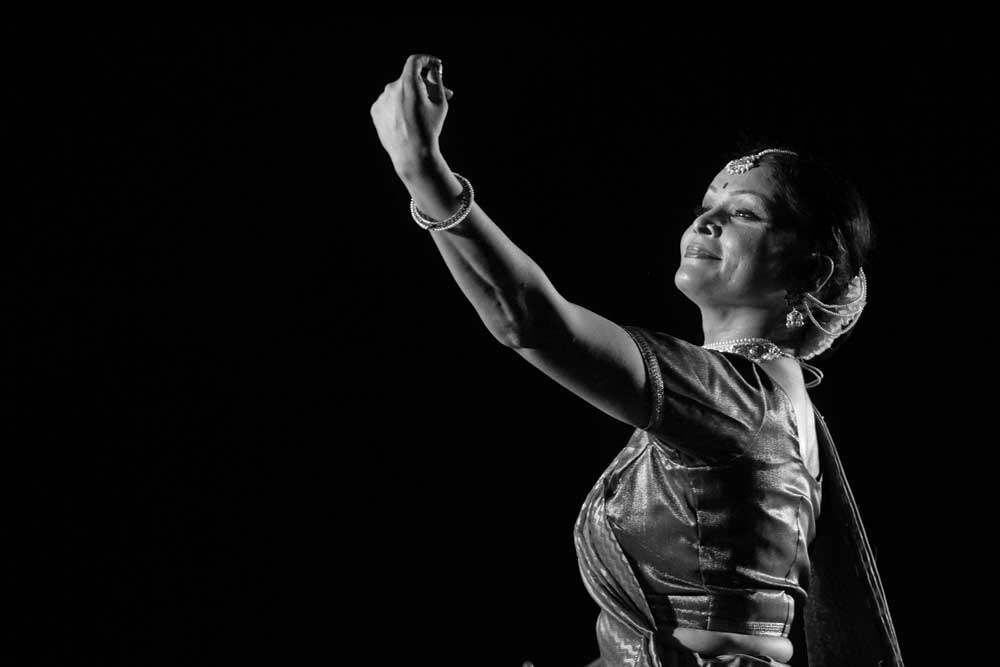 JAMSHEDPUR OF THE mid-80s was a cosy Tata township, where everyone knew everyone else. For young children looking for excitement outside school lessons and hopscotch, the town offered four attractions: two parks, a zoo where the animals never seemed to change, and a lake.

If you were a girl, you were mostly enrolled for music or dance classes at the small kala kendras and sangeet samaj units that dotted the town. Durga Puja and annual competitions meant the same seven faces at the talent show.

Gauri Diwakar was among them—an eager, fiercely competitive eight-year-old dancer who was learning Kathak. “We were a Bihari family; Dad worked in Tata. There were these many options that you could use your energies on,” she recalls.

Her on-demand specialty was Main Teri Dushman, Dushman Tu Mera, the classic Sridevi snake shimmy from Nagina. Diwakar wouldn’t spare any of the moves, including writhing on the floor, coiling and uncoiling with enthusiasm, wrists cupped as a hood. This dance routine was also brought out on visits to families and friends, with “Gauri achha naachti hai; beta dekhao…” as the usual prelude.

As one of six sisters, her dances were always a family venture. “There was no idea of gharana, purity, classicism or anything. My mother stitched my costumes from net and satin and I thought they were the most gorgeous things in the world. My sisters would do the makeup and up I would perform completely self assured. If I lost any competition, I would bawl my head off. Every prize had to come to me,” she says.

It is this small-town sass that Diwakar says has given her the nerve never to buckle in the face of a challenge. Today, at 39, she is among the most eagerly watched young Kathak dancers, a mature soloist, a member of Aditi Mangaldas’ premier dance troupe Drishtikon (known for its innovative and avant-garde Kathak productions) and a choreographer in her own right. But it was the focus and provincial ambition that brought her here, she says.

For 10 years in Jamshedpur, Diwakar worked on building a foundation for the real learning that came later. She arrived in Delhi, she jokes, as a part of her married sister’s dahej and decided to try her hand at joining Kathak Kendra, then headed by the legendary Birju Maharaj.

“I had heard of him, seen some photos of his in some old book but had no clear idea about him or Lucknow gharana or anything, really. I walked into the interview and didn’t even recognise him in the panel. I was asked what taal I would dance to and I said nonchalantly ‘Rudra taal’, and I was speaking to masters who believed in spending five years polishing the basic teen taal. But I knew no fear, or doubt, they must have thought me a mad, dabbang girl. When I figured out who I was talking to, I nearly collapsed in nervousness,” she says. Not only did Diwakar succeed, she was also awarded government scholarships, and trained under the rigorous tutelage of Jaikishan Maharaj.

Kathak is a bit of an oddity among Indian classical dances, a wayward child with a mind of her own. It is what is described as khulla naach, the dance without any rigid rules about repertoire. It is what you make of it, or not. It can be all tinsel and dazzle, it can be energetic and entertaining, it can also be sublime. And in the hands of someone like Diwakar, it can be both, and more.

Early last year, Diwakar premiered a solo choreography: Hari Ho Gati Meri. The idea was to choreograph the poetry of Muslim Bhakti poets like Malik Muhammad Jayasi, Ras Khan and Hasrat Mohani, often called ‘the maulana who loved Krishna’. It was a brave venture to take on, not the least because her current guru, mentor and choreographer Aditi Mangaldas did not wish to go with the usual, overused tropes of Radha-Krishna romance in Kathak. Instead, she wanted Krishna as a spiritual, mystical entity, an abstract being whose persona drew devotees from across the spectrum. It could have ended up too pious, too literal or too wispy. But it turned out to be a luminous piece of work, energetic and meditative at the same time, traditional Kathak but one that was happy to play with the form.

I am no longer interested in doing many chakkars and impressing audiences. I decide where my dance goes, what my boundaries are. I don’t dance for four or five critics

“I choreographed it, stuck to tradition, but also broke some rules—going from drut to vilambit , for example, instead of stepping up the pace. But it was Gauri who owned the dance, grasping its intent and absorbing it beautifully. Without that, it would have meant nothing no matter how I spun it,” says Mangaldas.

Bharatanatyam dancer Vaibhav Arekar, who hosts Sindhu, a dance festival in Mumbai every year, asked for a half-hour slice of Hari Ho this year. It was, he says, an attempt to combine the traditional with the out-of-the-box. “Of course, you can be very alternate and pick some radical theme, but what she did was stay true to the soil of Kathak, with the theme of Krishna and love, yet innovate in terms of movement, pace, technique, space and time. The tatva (substance) of this kind of dance reaches you—it isn’t a caricature of something old. And her dance spoke to you every single minute, she wasn’t just riding on the choreography, she was sitting on it,” he says.

In the early 2000s, Diwakar, by then a Kathak Kendra graduate and professional dancer, started working with Mangaldas, whose dance philosophy breathes a different oxygen into the form. The moorings of Mangaldas’ Kathak lie in Kadamb, the famous Kathak school in Ahmedabad run by the trailblazing dancer Kumudini Lakhia, who has spent a lifetime defying the conventions of the style. Her dance aesthetics—from the economy of movements to elegant costumes to poetry—is refreshing and minimalistic for a style that is known for its flamboyance.

Diwakar says she was mesmerised by its elements, as typified in Mangaldas’ work. “I wanted to be a part of this dance. The first time I told Aditi di, she just laughed, but I was determined to understand its workings. I was like a sponge eager to absorb anything new and unknown,” she says.

ONCE SHE JOINED Drishtikon in 2001, Diwakar’s dance worldview changed. Still a creature of traditional Kathak, she says, “If you leave me to it, I would choose traditional Kathak over contemporary because that is what my roots are.” But she became a part of the off-beat Kathak-based experimental work Drishtikon excels in.

“I did struggle initially with the idea of working with abstract themes. How do you show time or timelessness? But I never lost faith in Aditi di’s choreography. I was open to new ideas,” she says.

She recalls carping during Timeless (an experimental work by Drishtikon) to a co-dancer about something that struck her as too obtuse. “I was talking to her using what we called ch language in school, you insert ch between alphabets to stay incomprehensible to anyone listening to you. Aditi di is so open to new ideas that she actually used the idea of ch and incorporated it in her choreography instead of ticking me off!”

What works for Diwakar is her innate intelligence. “She is a bright, fabulous dancer, very quick to learn. She brought a strong sense of rhythm, very tayyar (ready) and with an immense understanding of the body—of shifting balances, torque, extension, how the flank moves around the spine, the skeletal, membranous, even nervous system,” Mangaldas says.

The Drishtikon dance philosophy demands extreme fitness to ensure that the body is pliable for any manoeuvre. Daily practice involves yoga, Kalari and gym, apart from rigorous dance practice. There is little latitude for flab or slackness, which is often the norm in other schools of dance.

As any female dancer will tell you, pregnancy can, no matter how hard you work at it, seriously pause your career. Diwakar, whose daughter is now five, stayed off the practice floor for 15 months. She says that was the toughest phase of her otherwise never-say-die career.

“I was really struggling to get into form, to return to those levels of energy and fitness. This school of dance demands 100-per cent fitness and I worked for months on squash, swimming, gymming and dance to return to form. Now you can throw anything at me and I will handle it,” she says. As for parenting, like a good careerist she has one piece of advice: rope the rest of the family in for support, no matter what it takes; it is the only painless and comfortable way to raise a child and stay focused on your work.

In 2002, Mangaldas asked her to choreograph something on her own. She worked with the idea of ‘subah se shaam tak’ (sunrise to sunset) and then went on to choreograph Earth Diaries and Samvet. Her association with Mangaldas had taught her to ‘research, research, research when you choreograph’. It isn’t enough to dance on Ganesha or Shiva, you need to know what the deities hold in their hands, why, how, where are they coming from and where they are going.

Diwakar’s most ambitious work, which was presented at the Ananya Dance Festival in 2014, was Mugdha, a paean to the idea of beauty. Here is Radha and her fabled beauty, but she is no coy nayika, but a woman who revels in her own grace.

“I am no longer interested in doing many chakkars and impressing audiences. I decide where my dance goes now, what my boundaries are,” she says. “I dance for my audiences, others who are curious about dance, not for four or five critics.”

Kathak’s future, she says, is now quite safe even if changes are pulling it in many directions. “I believe it is far more popular, accessible and familiar to most Indians than other dance forms and it could be because of Bollywood. And because it is a ‘khulla naach’, it has immense possibility for sahitya, which I love, especially Hindi poetry. Everything is possible in Kathak,” she says.