Bakula Nayak uses fragments of the past to create new canvases 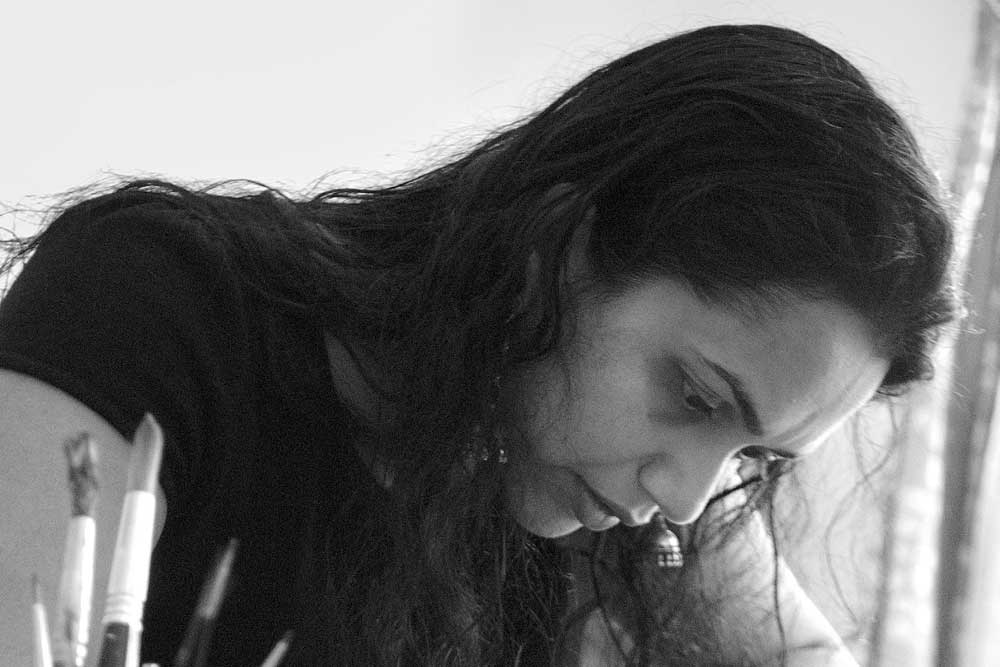 FIVE YEARS AGO, while spring cleaning her parents’ home after her father’s death, Bakula Nayak discovered a file that contained 500-odd letters that her parents had written to each other. “I’d always thought of my parents as the most non-romantic couple, ever,” Nayak says, “They were always arguing, disagreeing; you know, typical middle-class parents who were putting their lives and priorities in the backseat, doing their best to provide us children the happiest childhood possible. I’d never seen them even hug each other in front of us. But the letters were full of love and passion; they revealed to me a side of my parents I’d never ever known.”

That revelation, in a sense, became the starting point of Bengaluru-based visual artist Bakula Nayak’s journey into art. The letters, full of stories and trivia, sweet nothings and nostalgia, became the perfect canvas for Nayak’s visual expression. “I read, and re-read those letters and even though I was dealing with pain, I began to find beauty in everything around me,” she says, recalling a particular letter that her father had written to her mother when he worked at a rocket launching station—the only one in India. Written officiously on the letterhead of the company where he worked, the highpoint of the letter was the food in the hostel that her father hated, speaking of how he preferred instead to make himself a custard for dinner, pining for a time he’d return home and have his wife cook him a hot meal. “On that letter,” says Nayak, “I painted a bird that was like a rocket and an astronaut who landed straight into a bowl of custard. The letters allowed me the possibility to remain connected with my parents and with a past that I never ever wanted to forget.”

At the core of Nayak’s art is a childish fascination, obsession even, with stories. In vicariously engaging with stories—known, and unknown, familiar and foreign—Nayak layered old and forgotten narratives with a personal, interpretative visual articulation of her own. Here birds, cats, dogs and frogs become protagonists and tell a story that makes it possible for people to appreciate the romance of all things beautiful and nostalgic. “The hero of my work is the paper; I love all things vintage,” she says, “I like to preserve and celebrate paper that has value; that has survived over a hundred years. Sometimes I think it has perhaps got to do with the fact that I never really had a sense of history, personally speaking,” Nayak says, “I had no grandparents; my parents weren’t exactly great record keepers. So I was always excited by things that had a sense of the past. I remember being thoroughly excited by an ice-cream bill from 1932 that I found somewhere; the idea of four people who’d eaten different flavours in an ice-cream parlour from another time, painted in my head a million images that I desperately wanted to share by painting on that very same bill.”

The hero of my work is the paper; I love all things vintage. I like to preserve and celebrate paper that has survived over a hundred years

BY RE-VISITING A bygone time or story, and by re-creating it so that viewers can appreciate the beauty in the idea of a memory, and therefore feel a shared connection, Nayak’s art has traversed many subjects, ideas, themes and experiences. “The intent is also to make an environmental statement,” she says, telling us the story of how her mother-in-law once brought her a letter that was written in Kannada way back in the 1930s, where the writer speaks of a particular forest where deforestation is rampant. “You won’t believe this but coincidentally, last December, I remember reading a piece in the papers about that exact same forest that was becoming ecologically very fragile. Now, think about it. We had a warning literally a hundred years ago. And what did we do? Nothing. I think painting on vintage paper allows me to reinforce and re-interpret a story because somehow when we see things visually, we tend to feel for them a little more.”

In her world, where she likes to escape every once in a while, Nayak turns to birds as motifs and messengers to unfurl a narrative. Growing up in a conservative ethos, Nayak was the eternal rebel who always wished and hoped to be free like a bird. “One of the first things I told my husband when we got married was I want to be free like a bird,” she says, “In my head, I’m always somewhere else.”

And yet, Nayak’s paintings bask in a sense of happiness, harmony and balance. She attributes that to her training and professional experience as an architect and thereafter as a graphics designer. “Outside, my life is a lot of chaos,” she says. Five years ago, soon after moving to Bengaluru after a long stint in the US, she was diagnosed with fibromyalgia. She is a wife and a mother of three children— aged seven, eleven and eighteen—has an active social circle, and her auto-immune disorder often throws things off balance. “But in my art, I find a sense of anchoring and calm; it’s like meditation for me. When I start a series—and you’ll never find me painting without a definite purpose—I’ve got to have everything clean, and sorted. It’s like my buffer zone; I’ll slowly and patiently sieve through my studio, keep what I need, discard what I don’t, and slowly prepare the mind to get out of the everyday zone and it is only after that I can start to focus.”

Her series, inspired by Frida Kahlo, easily one of her greatest influences— both in life and art—coincided with a very difficult phase in Nayak’s own life. “I was intrigued by how someone who was always in so much pain could also have so much passion. I was struggling with fibromyalgia myself and I remember waking up one day, feeling so inspired by Frida’s own life and I created a series of paintings that re-imagined happy versions of Frida’s very grey and gory art.” In Kahlo’s iconic Me and My Doll, you’ll see Kahlo sitting on a bed, with her doll beside her. In Nayak’s re-envisioned work, titled the same, you see Kahlo become a bird and showering affection on another baby bird.

For the last three months or so, after calling it a wrap with a series of paintings inspired by Saint Tyagaraja, recognised as one of the greatest composers in Carnatic music, Nayak is swooning over Sangam literature. “I’m neither a singer, dancer, academician nor do I know Tamil,” she says, “But I’m inherently curious and I like to seek experiences and things that allow the possibility of enjoying them in the everyday without getting too academic about it.” Her collection, titled Sangam Unplugged, will celebrate its romance and open it up to wider appreciation. “Take my kids, for instance,” Nayak says, “Now they know Tyagayya, they have read a few translations of Sangam poems, they are familiar with the life and story of Frida; they recognise that the river Yamuna is a thing of beauty… little nuggets that the future generation stores in their heads; it’s interesting for me and it’s very exciting to introduce it to a younger generation without actually making a big deal about it. Because after all, I think of myself as a visual storyteller. And what’s art if it doesn’t speak to you?”