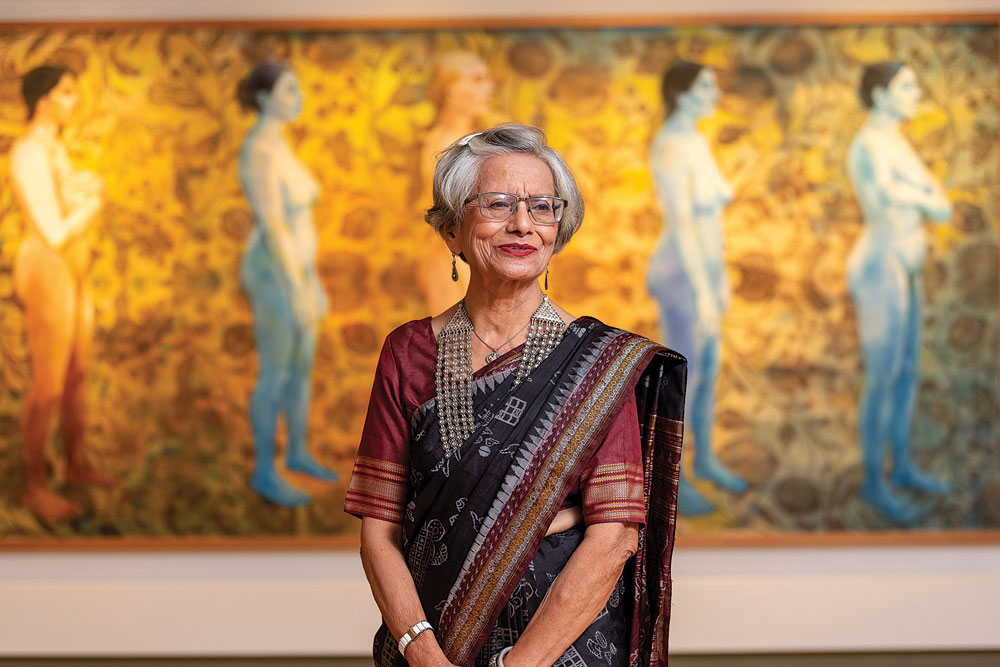 
NESTLED IN THE bylanes of a sleepy village outside of Delhi, is the studio of artist Anupam Sud. Here, she lives and works alone, with only clanky metal sheets and silent human figures—the subjects of her art works—for company. I meet her here on a hot afternoon, for the first part of our interview. Soon after my arrival, she shepherds me from her art-filled living room to her workshop below to familiarise me with the medium she has worked with for over five decades. Her vivid and incessant chatter about her work makes the quiet space come alive, transforming her from a diminutive septuage­narian to the internationally acclaimed printmaker, painter and sculptor known for an expansive body of work.

Sud’s workspace aptly reflects her personality. The neat and orderly arrangements speak of self-discipline and the industrial sized machines and smattering of works in progress, display her creative talent. Adorning a wall here is a half-done plate where a man wears a silky-smooth lungi; decorating a table there is an in­tricate sketch of a woman clad in a sheer nightdress reclining in a forest; and a third shelf houses terracotta sculptures of goddess-like figurines. Observing these, one begins to understand the fulcrum of her genius: the will to pursue perfection. Later, when we are en route to seeing her life’s work displayed at the Kiran Nadar Museum of Art (KNMA) for the exhibition titled Between Vows & Words: Anupam Sud (Five Decades of Art Practice), the first line she says to me strengthens my initial assessment, “I work very hard and very slow because that is my destiny. Art is like an ogre. Either you master it, or it will eat you up.”

Born in 1944 at Hoshiarpur, Punjab, this Himachali from Kangra was raised largely in Shimla, Himachal Pradesh. Her family migrated to Delhi in 1960, where she pursued a Diploma in Painting from the Delhi Polytechnic, which is now the Delhi College of Art. Here, under the tutelage of artist Jagmohan Chopra, who was her mentor and close family friend; she began to hone her skills in the art of printmaking. In the process, she became the youngest member of Group 8, a print­makers’ collective started by Chopra, which lasted from 1935-2013.

“Printmaking was only a subsidiary subject when I was in college, so I was actually trained as a painter. I just found this medium so magical that I was most attracted to it. Printmak­ing can never be totally predictable. It is like a sunrise over a landscape. You know what is about to unfold but never cease to be surprised by the revelation,” she asserts.


“Printmaking can never be totally predictable. It is like a sunrise over a landscape. You know what is about to unfold but never cease to be surprised by the revelation,” says Anupam Sud, artist

When Sud started to pursue printmaking in the 1970s, India was in the midst of war with Pakistan, and had banned certain acids needed for the printmaking technique. Chopra, and in turn his students, found a solution and began to use an alternative method known as collagraphy, where the materials are applied to a rigid substrate, which in this case was card­board. Sud took well to this medium and created numerous works, some of which are currently on display at KNMA. Her proficiency with printmaking became the basis of her applica­tion for the British Council scholarship to the Slade School of Fine Art, London, where she learnt and practiced this artistic technique from 1971-73.

Portuguese artist Bartolomeu dos Santos, who was attached to this prestigious art school, became her guide. Remembering those days fondly, Sud recalls, “My mission to go abroad was to learn as much as I could, so I could put everything into practice in India.” And that is exactly what she did. For nearly three dec­ades after returning from London, she taught at the printmak­ing department at the College of Art, Delhi.

Roobina Karode, the curator of Sud’s retrospective at KNMA, briefly overlapped with her as a fellow faculty member. Hence, she was uniquely placed to appreciate and present Sud’s works to the world. “Anupam’s practice of more than five decades defies easy classification and periodisation. The sheer volume and scope of this elusive and discreet artist’s oeuvre, escapes any such attempt. She is perhaps one of the most significant Indian artists especially in the context of her extensive engagement with printmaking,” she says.

As a printmaker, Sud’s work largely focuses on various intaglio processes showing the human figure. Over time, she also expanded her practice to include other mediums such as painting, charcoal, pastels and ink.

At KNMA, Sud walks me through her favourites of the 215 works of mixed media art currently on display. She unapologet­ically clarifies, “I’m talkative and my work has to be talkative too. It should not put you to sleep! Take the example of these masked works—they have layered meanings. I made them to represent the different attitudes that we wear to cover our true selves. If we want to make ourselves fierce, we wear a mask. If we want to be coy, we wear a mask. Only after you become close to people, you can unmask them layer by layer.”

This intent shines through in an interesting work titled, Preparation for the Next Act…, which shows a woman donning a theatrical mask heavily decorated with Asian-style makeup, with characters from the Japanese language forming the backdrop. Sud says this work represents the repressed women she met while visit­ing Japan decades ago. In giving them a mask of cheerfulness, she depicts a hopeful future for them. Another striking piece called Olympia, features a gorgeous prostitute as the object of her male client’s gaze. However, her self-assured stance and embellished clothing seek to turn the established narrative on its head.

Sud’s mastery over the human form is the common thread in her work, which is spread across a variety of mediums and styles. I ask why she stayed true to the naked form? She responds, “I love the sensuality of the body, whether animal or human. I like to show the beauty of god’s creations as they were made, so I avoid putting clothes on them. Another reason is that clothes can be modes of identifica­tion that mark a person as belonging to a certain community or country. I prefer to show humans in their natural form because my artistic concerns are universal. When people ask me why I make nudes, I respond saying because you are nude from within. I make god’s forms. If you only see the nakedness in my work, you are missing its real message.”

“When people ask me why I make nudes, I respond saying because you are nude from within. I make god’s forms. If you only see the nakedness in my work, you are missing its real message,” says Anupam Sud

Endorsing this sentiment, Karode adds, “Anupam’s evolu­tion as an artist, from the ‘plate’ to the ‘palette’ has been an exemplary and singular story. She demonstrated the will and fortitude of a young woman silently and slowly subverting the archaic notions of male supremacy and puritan idioms of modernism. She chose the medium of printmaking as a more democratic and readily transmissible form than painting, though in later years, became proficient in the latter as well.”

She began painting after a debilitating accident in 2008. Paralysed for over a month, she miraculously recovered yet re­mained weak and unable to perform the manual labour that is essential to a printmaking practice. And so, she began to paint. Fortunately, with the help of erstwhile student and fellow printmaker Rajesh Rana, she has returned to her favoured medium since then, but painting and sculpture have also become integral to her practice.

Detailed portraits of family members and herself dot the exhibition, with the latter meticulously capturing nature’s untampered progress over the years. Her parents, in particu­lar, are consistent models in her work, as she lived with them till their death. Sud is grateful that her ailing mother saw her first solo show at Art Heritage, Delhi in 1989, before her untimely demise, but her father’s loss many years later, seems to have affected her keenly. She dedicates a massive watercol­our entitled Dressing for a Journey, to his final days. “Daddy was quite ill in the end, and he only wanted me by his side. When he was in the hospital, Roobina was the only colleague from college who came to see me, and she wondered how this life situation would play out in my work. So while painting it, I thought of her often. The work shows my father in his final days with the drip and wheelchair, while on the other side, I’m getting ready for another journey by dressing myself up. A family portrait with all my siblings, and a scene with my best friend and her dog completes the composition, which is very close to my heart,” she says.

Sud’s universe consists of many subtleties that may be lost on first-time viewers. This is where Karode’s role as a curator and long-time colleague and friend, comes into play. Her in­terpretation of the artist’s work helps to unravel its numerous layers. This depth of meaning comes out in a striking piece titled The Rear Window. In the wake of the Mandal Commis­sion protests, Sud was inspired by the visuals of the carnage of public property. She uses Bus number 345, which plied the Supreme Court / Delhi College of Art route, that she took on a daily basis, as a symbol representing how regular people can be the subject of violence. Additionally, the packed people in the bus hint at the sexual harassment women often face while travelling by public transport.

After hours of traversing the curlicued corridors of KNMA over a long and fruitful discussion of her works, the artist halts in front of the piece which gives this exhibition its name. Between Vows & Words shows a couple holding each other in a tight grip that could represent either a prom­ise of love or the threat of dominance. Examining it with head tilted to one side, she declares that she finds peoples’ varied interpretations of this work oddly reflective of their own life experiences. “Where some see naturally abounding love, others feel the repression of emotional imprisonment. A few toe the line between these two extreme emotions,” she says, inadvertently also summarising the appeal of her own works.

(Between Vows & Words by Anupam Sud runs at Kiran Nadar Museum of Art, Delhi, till December 15)