Anish Kapoor: My Name is Red 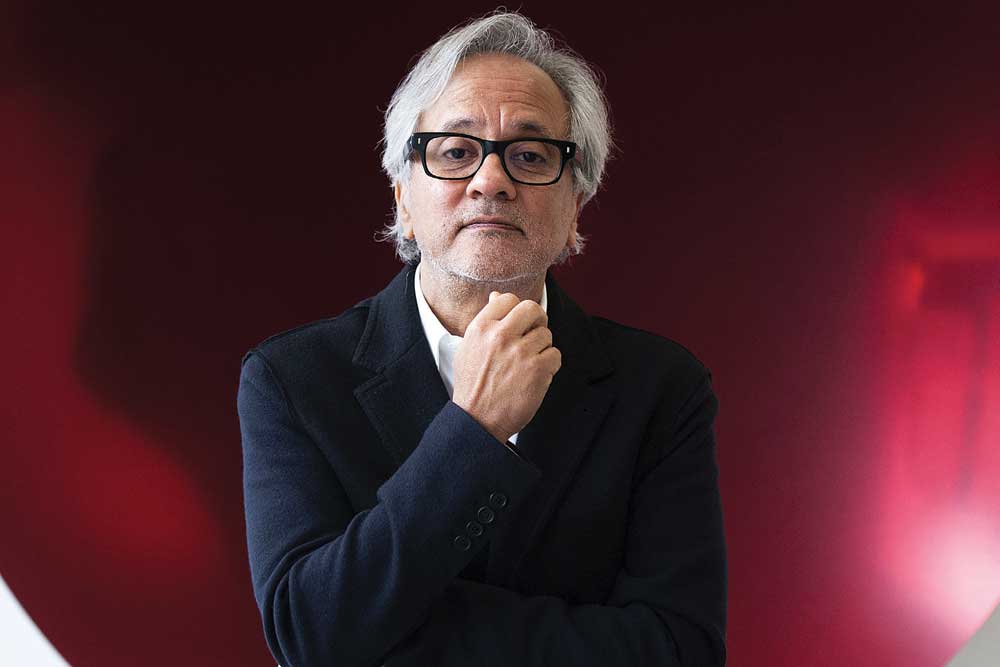 THREE AMORPHOUS sculptures in searing maroon, like lumps of sinuous, open flesh, stand stark against crisp white walls. To the onlooker who considers their ominous forms, large protruding nodules can be made out that leave sinking, dark hollows at their roots.

Anish Kapoor’s exhibition of new works at Lisson Gallery in London is a slaughterhouse of reds. Through violently expressed shades of the colour of blood, it explores the diametrically opposed yet complimentary notions of organic and geometric.

These sculptures—which, as exhibition organiser Emily Skeppner tells me, the artist identifies as paintings—are made of silicon. Kapoor sculpted the material, which only remains malleable for an hour once it has been mixed, over a mesh of wood and wire, then covered them in a veil of fine gauze that disguises the detail and piques one’s curiosity as to what lies beneath. The result is a visceral exploration of the internal human body in its most vulnerable state: exposed and seemingly wet. Like blood.

Although related to a set of experiments with painted silicon that Kapoor has been working on for many years, including a triptych of paintings shown here at Lisson Gallery in 2015 titled Internal Object in Three Parts, these new works are far less contained. They represent an unbridled and more violent eruption. Due to its scale, one of them had to be brought in through the window, to the astonishment of passersby in the gallery’s civilised Marylebone environs.

Kapoor’s organic forms are contrasted by other sculpted works that, through their geometry, are more preoccupied with the metaphysical than the physical. In this exhibition, dotted among the lumps of silicon are a contrastingly smooth and geometrically precise pair of concave stainless steel mirrors. One is half coated in red lacquer that leaves a matte finish but you can see your reflection clearly in the bottom half, beneath a horizon-like line, which turns you upside down until you get close enough. The other is entirely coated in matte red.

Reflective surfaces are a hallmark of Anish Kapoor’s work. His giant bean, Cloud Gate, in Chicago is perhaps the most famous, but there have been numerous gallery works and an outdoor exhibition dedicated to his mirrored sculptures in Hyde Park, London, organised by the Serpentine Gallery and Royal Parks in 2011. Their smoothness and mathematical precision is astonishing, but Kapoor has spoken of his desire to reveal their metaphysical properties.

Indeed, his mirrors are more than stainless steel. They manage to distort our perception of things by Turning the World Upside Down and Turning the World Inside Out (to cite the titles of two such works). In doing so, Kapoor’s reflective surfaces come to life. They read us, manipulate our perspective, destabilise us. Although exact, they seem to defy geometry or scale. They somehow function as ontological instruments that give us a glimpse of our surroundings with a fresh sense of being.

As an artist who predominantly works with sculpture and is known to distance his hand from his work, it is revealing to know that his new series of paintings, gouache works on paper, were physically painted by Kapoor. If the exhibition can be described as representing geometry on the one hand and the organic on the other, then these paintings, made with the sweeping strokes of the end of a stick, most definitely fall into the latter category, along with the flesh-like sculptures. This is down to the way in which they were crafted, by the artist himself, unlike the mirrored works— which are conceived by Kapoor but manufactured without his hand—as well as their abstract expressionist aesthetic.

Kapoor has lived and worked in Britain since the early 70s and has given up his Indian nationality, but he was born in Bombay and his underlying Indian identity seeps through his work

The transcendent, figurative scenes of eruption or hellfire in the paintings are an evocative display of fury, passion, even eroticism. Many feature a flame-like form with dark matter at the centre. Even though Kapoor has not exhibited many 2D paintings before, the conceptual frame of reference shows clear parallels with his 3D work. The black core at the heart of these works, which seems to be a source of fascination for the artist, are reminiscent of the seemingly infinite voids at the centre of certain of his sculptures.

THIS MONTH, FOR example, Kapoor opens an installation called Descension in Brooklyn Bridge Park in New York, which is a whirlpool 26 feet in diameter that creates the illusion of a churning, liquid black hole. Homi Bhabha has commented that Kapoor’s holes or voids, such as this work, signify much more than nothingness. He wrote, ‘To see the void as a contained negative space indented in the material is only to apprehend its physicality.’ Through depicting erasure, Kapoor seems to be acknowledging an otherness that is as real as his vivid use of colour.

Kapoor’s preoccupation with voids is closely related to his use of black. In an interview with Hans Ulrich Obrist and Julia Peyton-Jones of the Serpentine Gallery in 2011, he spoke of his interest in ‘Non Objects’ which he described as ‘a literal attempt to make a hole in the space.’ This is something he dreamt of taking further. ‘As a kid, I had a fantasy that one could invent a paint that would literally paint out part of the world,’ he said. It is a childhood fiction that Kapoor recently made real, by working with the blackest black on Earth.

Kapoor commenced a project to explore how to turn Vantablack, which was developed by scientists for use on stealth satellites and for military uses, to aesthetic purpose. He has now, controversially, been granted exclusive rights to use it, following in the footsteps of Yves Klein, a French artist who, in 1960, took out a patent for a colour now called International Klein Blue. Kapoor’s move sparked outrage among other artists, including portraitist Christian Furr, who made public statements complaining that Vantablack should be available to everyone. British artist Stuart Semple derided Kapoor’s exclusive partnership with its developers, NanoSystems, by patenting a fluorescent pink paint pigment and making it legally available to all artists, except Kapoor. Kapoor was legally banned from purchasing it, although he subsequently got hold of some and coated his middle finger with it on Instagram. One wonders if this attempt to ridicule the protests of other artists was necessary or whether it was simply a display of the artist’s might and now notable celebrity status.

But red is the colour that Kapoor has put to most dramatic use. In 2002, he filled Tate Modern’s vast Turbine Hall with a huge red sculpture of stretched fabric that resembled a blood vessel. The use of red wax is perhaps the most striking aspect of his work. The centrepiece of a 2003 exhibition at the Kunsthaus Bregenz, Austria, was a 12-metre wide circular platform supporting 20 tonnes of red waxy material, titled My Red Homeland. Another work, Svayambh, which took over five galleries at the Royal Academy in London in 2009, comprised a monumental block of red wax that moved along a track depositing wax as it squeezed through the doors.

It is hardly a surprise to see another Anish Kapoor exhibition dominated by the same colour. But why red? The titles of the latter two artworks are clues. Both have personal connections to Kapoor. His ‘homeland’ is India and ‘svayambh’ in Sanskrit translates to something that is self-generated. Kapoor has lived and worked in Britain since the early 70s and has given up his Indian nationality, but he was born in Bombay and his underlying Indian identity seeps through in his work; this colour being the most obvious, albeit conceptual, expression.

When once asked by curator Marcello Dantas about the colour of his homeland, Kapoor’s sharp response was, “I’m sure it’s red.”