Who Answers for the Sins of a Ministry? 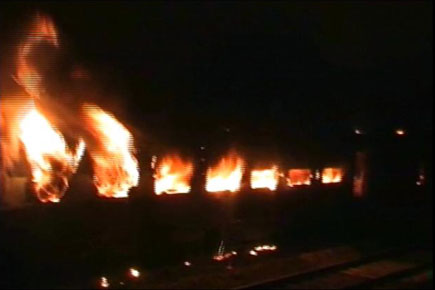 
An AC railway coach on the Doon Express caught fire resulting in the death of seven, including two children below the age of ten. Like a dozen other incidents over the past couple of years, we will probably learn little about why the accident happened and who if anyone is to blame. The very idea of accountability seems to have disappeared from the system.

But this daily reportage of death and accidents hides personal tragedies of the worst kind. Consider this brief report from Mumbai, ‘The mishap occurred between Nahur and Mulund stations when a door panel of a CST-Ambernath local came off the hinge, flew off and hit the Mumbai CST-Bangalore Udyan Express, which was running on the parallel tracks. Chandrabai Hadkamal (35), who was sitting near the door of the express, and four-year-old Sharnu Kumbhar, who was at a window seat, were hit by the panel. They were taken to Fortis Hospital in Mulund where Chandrabai’s right hand till the elbow had to be amputated and Sharny’s wrist of his left hand. Doctors said their condition was stable.’ Surely, when a four-year-old child has to live with an amputated wrist because a train door flew of its hinge, someone must be held accountable?

Most such discussions usually end up looking at investment in the Railways, the lack of modern safety technology and other material issues, but really there is an accountability that lies with the people in the system, and that accountability begins with the person heading the ministry. Take one simple fact: whatever may be said today about Lalu Prasad’s much-touted achievements as Railway Minister, it remains true that fatalities dropped to an all-time low in 2007 and were generally contained during his tenure. It is also true that fatalities went up as much as 50 per cent (and this does not include those killed in incidents attributed to Naxals) as soon as Mamata Banerjee took over, and have remained at that level even after she has relinquished charge to her hand-picked successor Dinesh Trivedi. This 50 per cent increase actually represents 40 additional deaths each year. In other words, all things remaining the same—after all, the Railways functioned with much the same constraints under Lalu as they did under Mamata—she and her successor are directly accountable for these 40 deaths a year, not to talk of the fate of people such as the four-year-old Sharnu Kumbhar.

It is generally said that Mamata was a minister far too concerned with her home state and far too little with her ministry, but then the question that really counts is why she and then her successor have been allowed to treat the Railway Ministry as the personal portfolio of the Trinamool Congress. This has resulted in ideas of innovation that include placing people such as Suhel Seth on railway expert committees.

If the question is to be placed before Manmohan Singh, one can only presume the answer would once again be the compulsions of coalition politics. Honest though such an answer may be, it is not sufficient. It was the same answer extended by the Congress when questions were raised about A Raja and in fact Dayanidhi Maran in the Telecom Ministry.

This is a question that goes to the root of how we are coping with governance in the era of coalitions. We have now had a coalition government running this country for over two decades. We have still not evolved a system of accountability that considers the responsibility of an alliance as a whole. It is one thing for a prime minister to plead ignorance of what a minister may have done, it is another for a prime minister to have all the facts before him, and certainly in case of the Rail Ministry the facts have never been hidden, and yet take recourse to the plea that matters are not in his hands.

Similar issues arise when we look at the record of the ministries handled by the NCP. Sharad Pawar continues to hold on to the Agriculture Ministry, where he has little or nothing to show during a tenure  when the failure to spur agricultural growth has been one of the significant failures of the two terms of the UPA. And while Praful Patel has been finally eased out of the Civil Aviation Ministry, as the recent CAG report on Air India suggests, he has much to answer for, but then it does not seem likely that Manmohan Singh will be asking any questions.