When a Film Gyres and Gimbles

Tim Burton’s Alice is wonderfully greater than the sum of its parts. 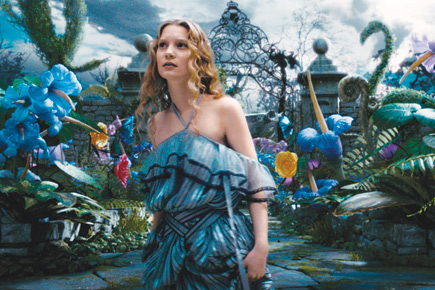 Tim Burton’s Alice is wonderfully greater than the sum of its parts.


On 4 July 1862, Charles Lutwidge Dodgson, a young Oxford mathematics professor, took a boat ride with the three daughters of his Dean. To pass time, he told them a story, with the eldest girl, Alice Liddell, as the protagonist. And created perhaps the most famous character in English literature.

Now a man called Tim Burton, who is one of the world’s weirdest men in the film direction trade, has made a film called Alice in Wonderland. Burton is a man with the worst hairstyle on the planet (he just doesn’t have a comb, as far as one can make out), and has made eerie films like the first Batman, and films he should be killed for, like Mars Attacks. The only way to describe his body of work is to guess that he has a child-like mind with a dark, twisted imagination. He has made several films for adults that are based on what normal people thought were children’s stories, like The Legend of Sleepy Hollow and Charlie and the Chocolate Factory, with the able assistance of the most interesting film star at work today, Johnny Depp. So it’s hardly surprising that Depp plays the Mad Hatter in Alice, and his role is much longer and more important than what Carroll wrote.

Carroll’s Alice books (Wonderland and Through the Looking Glass) are travelogues through impossible lands, peppered with secret mathematical riddles (Looking Glass has Alice moving as a white pawn in a chess game and winning in the eleventh move), and the demons that chased Carroll’s subconscious (there are enough references to death in Alice to scare anyone who bothers to notice, and Carroll was an avid photographer of naked young girls, including Alice). So it’s, let’s say, a scary task to make a film out of Alice.

Burton takes elements from both the Alice books, turns her into a 19-year-old instead of the pre-pubescent little girl Carroll had written about, and makes the film a paean to freedom, a freedom of the mind and imagination, far broader than the clear shackles that a young woman wears in a suffocating Victorian environment, which is the obvious texture of the film.

The Mad Hatter is not mad any more, but a deeply sensitive man with an existential crisis, and an independent mind. The white rabbit with the waistcoat has deeper concerns than being late for his appointment, which is what we remember from Carroll. Even the dormouse, who features in the book only as a half-asleep creature on whom the Mad Hatter and March Hare rest their arms, is a plucky fellow with a little sword of his own. And the idea of Alice as the predicted saviour who will come on the ‘frabjous day’ to kill the Jabberwock and liberate the people of Wonderland, is brilliant. Jabberwocky (from Through the Looking Glass) is one of the most famous and intriguing poems ever: ‘Twas brillig, and the slithy toves did gyre and gimble in the gabe, all mimsy were the borogoves, and the mome raths outgrabe.’ So Alice takes the ‘vorpal sword’, as mentioned in the poem, and kills the frightful creature—and, well, everyone is happy, other than the bad people.

I could go on. But, as I said, making a film of Alice is a daunting task. And the worst thing you can do is just depend on computer graphics. Of course, the Cheshire Cat needs computer wizardry, and the Caterpillar, but if that was all it took, it would be sterile stuff. Burton has kept the whimsicality of Carroll, and put it all together in a structure that has a message. Carroll did not mean to have any particular point to his Alice stories. But Burton has taken elements from the stories and woven them together to express a meaning that is bigger than the sum of parts.

Okay, I am a bit of an Alice fanatic, so excuse me. But I really think Tim Burton’s Alice in Wonderland is that rare film that does justice to a great work of literature, and with originality that the writer would have approved of. It gyres and gimbles.