What France Can Learn from Italy 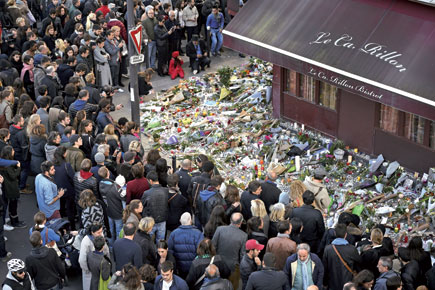 Italy has been a front-line state in the recent intrusions in Muslim lands in Afghanistan, Iraq and Libya, sending thousands of soldiers in the first two, and has added to the provocation by loudly supporting American policies, and actively collaborating with Israel, lately on highly publicized multi-billion military projects.

Italy also has an uncounted but multi-million Muslim population, and very porous borders, lately nullified by the wholesale admission of all comers as the Italian coast guard and navy keep rescuing overloaded boat just off the Libyan coast.

Since September 11, 2001, a total of 44 Italians have been killed by Muslim terrorists, starting with ten who died on in the Twin Towers, and 34 others in countries around the world, including one in Paris last week.

But not one Italian has been killed by Muslim terrorists in Italy.

That is not because they did not try. Since September 11, 2001, when they went on full alert, never to stand down again unlike others,Italian Intelligence, security, carabinieri gendarmerie and police forces have detected and interrupted hundreds of terrorist plots large and small, at every stage from mere verbal scheming to fully ready actions, of the kind successfully completed in Madrid, London, Paris, Toulouse, Copenhagen, Brussels and elsewhere. Only in Italy have plotters failed to become terrorists, even though the Vatican, is actually the most iconic target in Europe, and now the top target of the Islamic State, judging by its videos.

Italy is fortunate in its natural and man-made beauties but its success in counter-terrorism so far (fingers crossed) owes nothing whatever to good luck. It is all a question of method, itself derived from one fundamental insight: terrorist actions cannot be anticipated and prevented––all such efforts are simply futile because there are just too many possible targets and an infinity of possible dates. Nor can one hope to detect even imminent attacks, because terrorists need not reveal themselves until it is too late.

Actually there is only thing that can be done: to follow all who are suspected to be truly dangerous 24/7, so that they can be arrested or killed no matter how suddenly they emerge to attack.

That, however, is quite impossible unless the total population of “suspects”—in the hundreds at any one time in the case of Italy, even into the thousands sometimes–is drastically reduced to be able to allocate enough security personnel –at least four for each truly dangerous suspect, in teams of two dozen or more for each possible plot.

It is at this point that the Italians differ drastically from the French or Belgians or British, who keep monitoring suspects, filling ample files with lots of reports, photographs, videos, and intercept print-outs, as if they were biographers of the most encyclopedic kind.

The Italians by contrast take action the moment the very first indication comes in.

That is sometimes a phone or e-mail intercept, and sometimes a tip-off from an agent (Italy invests modestly but steadily in the foreigners it recruits) but more often it is a friend who reports someone for speaking of Jihad, for swearing that he will kill for Hamas, join the Islamic State or other such things.

What follows is an expert interrogation. Many are soon sent home, once classified as mere boasters, if they turn very meek once held. Those who are proud to be militant are held, and their records are minutely examined to find any criminal infraction for which they can be arrested, tried and imprisoned (unlike the French who treat militant petty thieves as petty thieves, not as militants). If any faults are found in the immigration paperwork, they are deported—even if they have become Italian citizens, a measure applied severally to vehement Imams (181 more Imams are in prison as of now, along with hundreds of others).

With all these methods, the number to be followed 24/7 falls to manageable levels—the key to the success of the entire system. Actually the French, Belgian and Italian gendarmerie, police, intelligence and security systems are quite similar. The only difference is that the Italians prefer to arrest would-be terrorists before they can act.