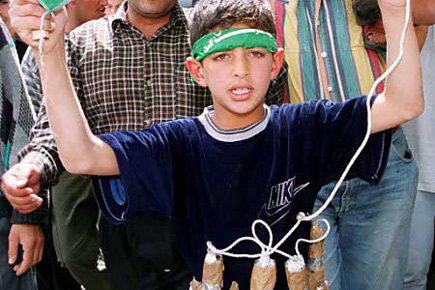 
Years ago, I met with the parents of a ‘terrorist’. “He was a good boy,” his mother said, as her husband wiped his streaming eyes with a check handkerchief, “I don’t understand how it happened. He was a good student, and he always helped people.” This young man, a 24-year-old student, had strapped a bomb onto his chest, boarded a busy bus, and died along with his two dozen victims. The family’s house had been demolished the next day, and his two brothers (guilty until proven innocent) were thrown into a high-security jail.

I was introduced to the parents by MN, a good friend and peace activist, who was from the same village and had been a classmate of the youngest brother. MN opposed the use of violence as a means to an end in any circumstances, but many young men in his community were open to the idea and they all debated the subject endlessly, bitterly. MN had never suspected this particular boy, three years his senior, of being a ‘terrorist’. I put the word terrorist in quotes because the label conceals more than it reveals (other inadequate labels that might apply: freedom fighter, murderer, psychopath, brainwashed kid). The parents of this terrorist had agreed to talk to me, on condition of anonymity. Their answers were simple and honest; MN, who translated, cried the entire time. (“What, you were crying over a terrorist?!” was the response at a dinner party I attended that evening on admitting that I had cried some as well. No, of course I wasn’t crying over the terrorist, I quickly defended myself, feeling oddly compromised).

“Had there been a political atmosphere at home, one of dissent?” I asked. They both shook their heads resolutely.

“We are not that kind,” said the mother.

“We have a cousin who was involved in those things,” her husband added, “but I’d made it clear to them [his boys] that I’d thrash them if they had anything to do with him [the cousin]”.

“Well, they were not really afraid of their father, and anyway, kids these days, who can tell them what to do?” the mother explained.

I asked if their son had spoken of injustice, of revolt; of hatred, of resistance; of revenge. No, they were sure, nothing. “They were good boys,” the father said, “even their teachers say so.” The father had a photo of his dead son in his wallet, a small curly haired kid in a dressy red shirt, smiling obediently at the camera. I tried and failed to find something odd in his smile, in his eyes, anything that could serve as a warning in retrospect. “It is better he is dead,” the father said, putting the photo back into his worn leather wallet. “How would I ever be able to forgive him?” I wait for his wife to protest but she does not. She had a photo too, of her three boys in happier times, lanky youngsters in jeans sitting under a tree by a stream, grinning away, looking like anyone’s kids. Who could say when, and in what condition, their parents would see the two younger ones again?

I asked them, hesitantly, if their relatives and community were judging them for what their son did, or perhaps on the contrary admiring them for raising a ‘martyr’. They did not answer. Only in their forties, they looked so old; one couldn’t imagine they would recover. “We don’t know how he could have done this,” the mother said finally, “We should have known. This is our terrible mistake.” Not yet a mother, I inwardly gathered my future children into a fierce embrace, commanding them to stay safe and behave well. The mother’s eyes met mine just at that moment. She knew what I was thinking. I blushed. I remember her every time another damn bomb goes off. I try to pray for her and her family when I light my Sabbath candles, but as the list of people— the perpetrators’ parents; the victims and their parents and their children, their brothers and sisters, husbands and wives, friends and lovers—grows longer weekly, I often feel overwhelmed.

My interview went unpublished. I could not find a newspaper that thought their apology was important enough.