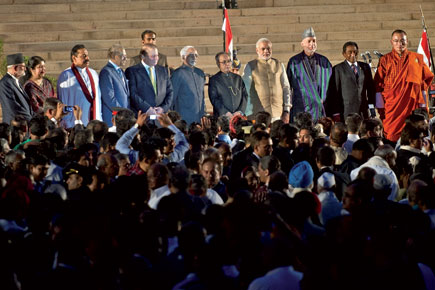 The meetings with invited heads of government of the South Asian Association of Regional Cooperation (SAARC) states, following the grand spectacle of Narendra Modi’s investiture, reveal the Indian Prime Minister’s conviction that a friendly and pacified neighbourhood is an essential element to realise India’s great power aspirations, and that ambush diplomacy is a good way to secure a ‘first mover’ advantage—and, eventually, the desired outcomes.

Modi’s invitation was less a calculated move than an inspired initiative that surprised the Ministry of External Affairs. The alacritous acceptance by most of the countries was anticipated, but not the invitation being turned into a matter of high strategy in Pakistan, which suggests that overcoming Islamabad’s historical suspicion of India will take more than imaginative moves, an open mind and a show of good faith.

The drama that attended the reactions and responses to this Modi move at home and in the neighbouring countries was nevertheless instructive from the point of view of the challenges he faces. Meanwhile, in Pakistan, Nawaz Sharif, mindful of the army’s antipathy, teetered between giving in to the traditional wariness of India, reflected in its former Foreign Secretary Shamshad Ahmad’s dismissal of the invitation as a ‘patronising gesture’, and letting the more venturesome section spearheaded by the Pakistan High Commission in New Delhi hold sway with its view that for the Pakistani PM to miss such a chance of interacting with his Indian counterpart so early in the latter’s tenure would be a ‘visceral squandering’ of a rare opportunity.

In more hardline quarters, the Modi gambit was denounced on the one hand by Shireen Mazari, a one-time director-general of the military-supported Pakistan Institute for Strategic Studies and member of Imran Khan’s Tehreek-e-Insaaf party, as an Indian ploy of ‘power and dominance’, and, on the other hand, seen by Air Vice Marshal (Retd) Shahzad Chaudhry as testing ‘the mettle of Pakistani leadership’ that required Nawaz Sharif to display what he called ‘the acumen to dominate’ the meeting with his Indian counterpart. The one-time pilot and former deputy chief of Pakistan’s air staff did not, however, explain just how Sharif was supposed to do this. But Mazari and Chaudhry reflected the confusion within Pakistan’s armed forces; especially since its new army chief, General Raheel Sharif, had, soon after his appointment, identified Islamist militancy as the country’s principal threat—a view recently seconded by the head of its air force Air Chief Marshal Tahir Rafique Butt at Sargodha whilst speaking to pilots of a newly inducted squadron of reconditioned F-16 fighter aircraft acquired from Jordan for the purpose of counter-insurgency operations.

The Pakistan military’s hesitation, however, is understandable. With heavy investment over the years by the Inter- Services Intelligence (ISI) in such tools of asymmetric warfare as the Lashkar-e-Toiba (LeT) and Jaish-e-Mohammad, any abrupt policy turnaround by a rapprochement-inclined Nawaz Sharif would put the country’s policy edifice, designed to counter India, out of joint. However, a desperate LeT attack on the Indian consulate in Herat, Afghanistan, failed to thwart the Pakistani leader’s journey to Delhi. It did not deter Modi or Sharif from talking to each other. Predictably, in their extended session the two leaders had the obligatory riffs on terror and Kashmir respectively to satisfy domestic constituencies before talking shop and the prospects of opening up trade.

The point of ‘ambush’ diplomacy is that it is unsettling, compelling foreign leaders and governments to respond in an appropriately heightened way in line with the tenor of the initial gesture. Thus, Nawaz Sharif acted on his gut feelings, reflected in his daughter Maryam’s tweets, rather than on reservations voiced by sceptics. Likewise, India’s invitation to Sri Lankan President Mahinda Rajapaksa upset the political applecart on both sides of the Palk Strait. Rajapaksa, in turn, did the unexpected by inviting the Tamil chief minister of the country’s Northern Province, CV Wigneswaran, to join him on his Delhi trip. The latter declined in fear of upsetting well-wishers in Tamil Nadu, even as most of the parties, including Chief Minister Jayalalithaa’s, reacted along cynical lines of fighting for the Tamil cause in Sri Lanka to the last Sri Lankan Tamil.

In similar vein, Mamata Banerjee kept away from the Delhi event while pleading for ‘special status’ and enhanced financial subventions for West Bengal, conceding, in effect, the futility of opposing Modi when he seals and delivers the deals on the Teesta River waters and a minorly redrawn border to Dhaka in return for Bangladesh tightening up on illegal migration into Assam—an exchange that Sheikh Hasina’s representative and Speaker of Bangladesh parliament, Sharmin Chaudhury, will have been asked to convey to her boss. It will pave the way for the economic integration of India’s Northeast and Bangladesh with the Indian mainland economy —with transit rights and interlinked electricity and gas grids.

Nepal’s Prime Minister Sushil Koirala, in asking for Indian development help for the landlocked country, will be tempted by the Bhutan model—of India building a string of hydroelectric projects on Nepal’s Himalayan watershed to light up that country, power its industries, and earn revenue by selling excess electricity to India.

The creation of a unitary economic and trade bloc of South Asian nations and proximal Indian Ocean island-states is an obvious priority for the business-minded Narendra Modi, but security concerns that undergird any such arrangement will need special attention. Economic ties are fine, but there’s nothing like extensive military cooperation and tie-ins to forge strong bonds. In this respect, Maldives’ request—made by the government of President Abdulla Yameen Gayoom— for Indian help in constructing a naval base off its main island of Male has to be met, and all resources deployed to get this project underway in double-quick time. New Delhi cannot afford another Hambantota, when Colombo approached India to upgrade this port only to be told by Manmohan Singh that it couldn’t be done. It allowed China to step in and consolidate its presence in Sri Lanka.

Even less can India afford to continue ignoring Mauritius’ offer—made by the government of premier Navinchandra Ramgoolam—of its North and South Agalega Islands as naval and air bases on long-term lease, as the Defence Ministry under the unforgivably obdurate AK Antony did for the last eight years. Indian foreign policy has traditionally had neither reach nor bite. A forward military presence in the Indian Ocean could give it both. A similar presence in the Seychelles and Mozambique would draw the western and southern Indian Ocean areas up to the East African littoral into an Indian security grid. At a time when the Chinese South Sea Fleet is feeling its way around the Indian Ocean, New Delhi cannot restrict itself to its peninsular territory and remain unambitious seaward, or even landward for that matter.

The Afghan President Hamid Karzai has emphasised a need for India to stay engaged with the successor regime headed by either Dr Abdullah Abdullah orAfzal Ghani in Kabul. This is a tricky bit of policy space to negotiate with Nawaz Sharif because Pakistan’s army remains distinctly uneasy about India’s presence in—and friendly relations with—Afghanistan.

Indian investment in the extraction of minerals, especially in the coal-rich Hajigak region and elsewhere in Afghanistan, and in other industries will only grow. So will its importance in India’s geo-strategic scheme of assured access to—and connectivity with—Central Asian countries through the Iranian port of Chabahar and the north-south rail and road corridors, parts of which are already functional, such as the Delaram-Zaranj Highway built by India.

Islamabad cannot easily be convinced that India’s expanding role in Afghanistan is benign and not a crafty design to get Pakistan in a pincer. There is one thing India can do to allay such Pakistani fears, but it is going to be resisted heavily by a vast majority of Indians and sections of the Indian Army fixated without rhyme or credible reason on Pakistan as a threat. New Delhi should reconstitute India’s war capability to obtain a single armoured- mechanised corps and several independent armoured brigades out of the present three strike corps, and transfer the excess manpower and fighting assets to form two offensive mountain corps, in addition to the one being raised, for a total of three such corps on the China front. Thus, diluting the Indian armoured threat that Rawalpindi is mortally afraid of will achieve three kills with the proverbial single stone: win Pakistan’s confidence enough to facilitate a genuine normalisation of relations, build up potent Indian offensive forces for operations on the Tibetan plateau as a deterrent to the Chinese army along the disputed mountain border, and strategically help establish India as a player in Central Asia.

Modi’s ‘ambush diplomacy’ has succeeded in breaking the ice and introducing him to his opposite numbers in other SAARC countries. The follow-on diplomacy will be a much harder slog.