The younger, local audience in Rajasthan may not realise what the fuss is about, but the world’s best musicians are drawn to the folk music of their state 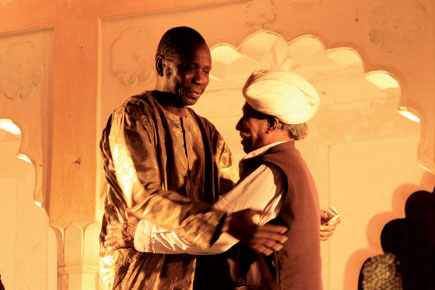 Twenty-year-old Shivraj Singh Bhati is a ziplining instructor at Flying Fox tours at Mehrangarh Fort in Jodhpur. Bhati thrives on giving tourists their superhero moment of the day. He introduces them to a high adrenalin world, as they zipline above what once used to be royal gardens, battlefields and, of course, the stunning fort right next to the Ranisar lake. The allure of Rajasthani folk music is all but lost on Bhati, who was born and raised in Jodhpur. Says Bhati, in his defence, “We hear it all the time here so it’s not something new.” Bhati was thrilled when the electronica blowout Sunburn Reload was held in Jodhpur in 2014 as a build-up to the big annual bash in Goa.

Electronica music, however, is not why the festival, now in its eighth year, drew a sizeable audience to Mehrangarh Fort every evening. The World Sacred Spirit Festival lists pop superstar Sting as one of its patrons (no he wasn’t in attendance in Jodhpur) and hosted some of the best folk musicians from Rajasthan and across the world. Sarangi player Lakha Khan Manganiyar playing a ballad with kora player, Ballake Sissoko, from the West African country of Mali, was one of the standout performances at the fest. Dara Khan Manganiyar, who plays the kamancha, also a popular string instrument of Rajasthan, joined the kora-sarangi duet to stage a smouldering drama on strings.

I also had a chance to listen to Gnossienne 1, a piece on piano composed by the 20th century Western classical musician Erik Satie, reinterpreted by vocalist Mukhtiyar Ali, a folk singer from Bikaner, sarangi player Sabir Khan and French composer Mathias Duplessy. I found Gnossienne 1 on Musicovery.com and later bought it off iTunes and have heard it on repeat without tiring of it. When Khan played the opening bars of the piece on his sarangi, I knew the musicians had only managed to deepen its emotion. Ali’s vocals recall the artistry of the legendary Pakistani qawwal Nusrat Fateh Ali Khan, and along with his band mates, Ali made the composition his own.

Mehrangarh Museum Trust director Karni Singh Jasol pointed out why Rajasthani music lends itself to collaborations. He says, “The pakkad or the grasp that our musicians have is unmatched. This is why you will hear them leading the collaborations most often.” This is also the reason why the world’s most influential musicians are fascinated by it. Rolling Stones frontman Mick Jagger is in India almost every year to be a part of the audience at the Rajasthan International Folk Festival in Jodhpur. Grammy winning Brit band, Mumford & Sons have collaborated with Rajasthani musicians on ‘Dharohar Project’ and Brit-Indian vocalist Susheela Raman most recently worked with percussionist Nathoo Lal Solanki for her last, brilliant album Queen Between.

This year, Jonny Greenwood, guitarist with English rock band Radiohead, voted as the Best Festival Band by Rolling Stone magazine, made his India debut at the World Sacred Spirit Festival. Greenwood played down his guitar work, letting US-born Israeli qawwal Shye Ben Tzur take leadership of the group that also included qawwals from Ajmer and a brass band from Rajasthan. The performance, which started off sounding like we’d gate-crashed an Indian wedding, gained a powerful energy once Ben Tzur seemed to be drawn into a trance.

Ahead of this show, I overheard a middle-aged man, in the same category of music lovers as Shivraj Singh Bhati, chatter on about Sunburn, the annual electronica fest held in Goa. He told his friend, “Pata hai Sunburn se badiya kya hai? Tomorrowland [one of the largest electronica festivals in the world, held in Belgium],” and went on to play a Tomorrowland setlist off his phone.

Luckily for Bhati and his tribe, electronica musicians also have a thing for Rajasthani folk. Electronica group Midival Punditz from Delhi have a new album releasing soon, which includes Kutle Khan, a folk singer and a seasoned player of the khartal, the Rajasthani version of the castanets. Along with Khan, Gaurav Raina of Midival Punditz brought the World Sacred Spirit Festival to a close with a high octane performance. For the first time at the three-day fest, rows of chairs were cleared to make space for a makeshift dance floor and Bhati may have been up ahead kicking up his own little dust storm.