Too Much Teen Spirit

There are times you just have to wonder. How much freedom do we give our teenagers? 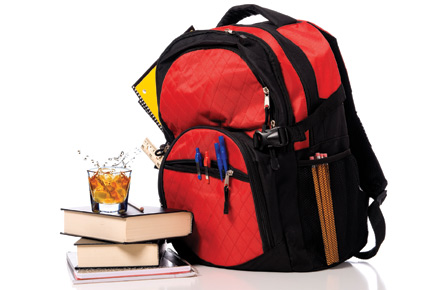 There are times you just have to wonder. How much freedom do we give our teenagers?


At a bar in a Delhi suburb one of these evenings, there was a group of kids at a table near where we were sitting. Schoolchildren, they would have been in class XI or XII. They were celebrating the birthday of one of the girls. There were about ten of them, and they were drinking. Not soft drinks, not beer, not Bacardi Breezer. They were having whisky, vodka and tequila. They were knowledgeable enough to even choose the particular brand of tequila they wanted, something, even at my age, I have no idea of.

It was natural that my friend and I were getting increasingly disturbed as the kids went on drinking and the noise mounted. After some time, one of the girls seemed to pass out and was being cradled by one of the boys. At this point, they called one of the waiters, we noticed, for further orders, and some conversation ensued that we couldn’t hear the details of, but the clear import was that the bar was refusing any more drinks to them. Two of the boys got up and one could hear them telling the group that they were going to buy breath fresheners for everybody.

Five minutes later, as I stepped out of the men’s room, one of the girls was puking right there; the women’s room was occupied and she couldn’t hold it back any longer.

In the National Capital Region (or maybe all of India, I don’t know), it is illegal to sell alcohol to anyone under the age of 25. I personally believe this is an unreasonably high age barrier, given that one can vote in general elections at 18. But my personal views hardly count for anything in this situation; the point is that the bar was serving them, fully aware of what was allowed and what was not. And when they refused the group of kids more drinks, it was in fact an act of double cowardice. At a certain point, clearly, the manager of the bar thought that it was getting potentially dangerous, that some of these kids could even be driving home, and there could be a mishap, and the bar’s name could appear in the papers. That would be problematic.

As upper middle class or rich parents, what are the limits we impose on children? Most parents of my generation feel a sense of guilt about not having spent enough time with them while they were growing up, and the easiest (and least time consuming) way to assuage that guilt, to an extent, is to let them blow some money. The only activity that many of us can think of to please the child on a weekend when we have some time for her/him is to go shopping. Spend some cash, the child is satisfied, and our parental duty is done.

Plus, we also carry the burden of another sort of guilt. We would have liked more freedom in our teenage years, as teenagers have wanted throughout human history. And most of us feel that our parents could have been a bit more lenient towards us. Now you are a parent, and you like to believe you are ‘liberal’, ‘progressive’, and other such terms that have become de rigueur for people of your demographics. So you don’t want to chain your child down, and you don’t know how long and elastic the chain should be, if it exists at all. And if you are too busy with your career and other worldly matters, you just hand the brat some money and get him out of your hair. And, especially in North India, you believe that if the brat does get into any trouble, you can easily pull some strings and, well, achieve clearance and closure.

I feared for these kids that I saw in the bar. And I know I should have gone up to the manager and told him what I thought of this. I did not. By evening, our urban life fatigues us, and that apathy which lies just below our skin kicks in, in full force. And I realised that that’s what’s wrong with those kids’ parents. And with us as parents.