The Thing About Human Dignity

Lessons about ourselves from the story of Narayan Pergaein 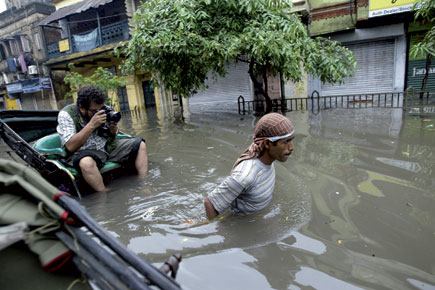 Lessons about ourselves from the story of Narayan Pergaein


You might know Narayan Pergaein from a YouTube video in which he stands on the shoulders of another man in a river abutting some slums in Uttarakhand. From that completely unnecessary vantage point, the television reporter rails against the government while describing how the lives of men like his carrier have been destroyed in the Uttarakhand floods. The video made its way to social networking sites and went viral. After testing for some time how deep the waters of public affront ran, his employers, a Hindi channel called News Express, sacked him last week.

The test of a man’s character is his demeanour in adversity, and by that measure, Pergaein comes a little short. In an interview to News Laundry, he blamed his cameraman for shooting the footage in a manner that showed him being carried. He said its leak was deliberate, done to malign him. Even if all that is true, he showed a limited understanding of his own situation. Essentially, he was making an excuse addressed to his immediate surroundings whereas his actions were being evaluated at a national level. What does it matter to some Twitter-happy fingers in Bangalore whether his cameraman wanted to screw him? Pergaein’s main defence was that this act was forced upon him by the man he purportedly exploited. He had gone to report on the flood-ravaged area, interviewed a stricken family and the man had insisted on carrying him across the waters as a courtesy. Pergaein gave him Rs 50 as a token of appreciation.

Difficult as the task is, it is still possible to make a case for Pergaein which he himself did not imagine. This can be done by starting with the most elementary question—what exactly was wrong in what he did? The image is powerful and an insult to human dignity, whatever that vague label means. Yet, look closely, and the man who is carrying Pergaein is actually smiling, as if amused by what is happening.

This is not the first time something like this has been seen. There have been instances that have made it to television of government functionaries getting similarly pampered by subordinates in remote areas. But in those cases there is an element of power involved, an indirect coercion of sorts. Does that apply to what seems like a commercial transaction by a news reporter whose extent of influence is Rs 50?

At its nub, you have a situation where the man who is doing the carrying has no problem (all this conditional on available facts), but a large literate number sitting in armchairs in urban India are agitated. Their outrage would have some merit had they let it loose after casting a look at their own lives. Consider an image which will be ubiquitous in most middle-class homes—that of a domestic worker on all fours cleaning the floor with a piece of wet cloth. Take footage of that, show it to a Western audience and their reaction would be similar to the sentiments evoked by Pergaein. Likewise, as people lead smug hygienic lives, should not there be some similar anger when a little distance away men go down sewer pits without masks or body suits? Every corner of India is stuffed with ugly imageries but they are so commonplace that it does not merit consideration. Plus, all that in some way is connected to your comfort. Someone who retweets the Pergaein video is living the self-delusion of uprightness whilst enjoying what would, by their own definition, be demeaning human labours.

Sometime back, Kolkata did away with rickshaws pulled by men citing the same reason. That it is not something fit for human beings to do. In reality, what is upsetting is not the act itself; it is the discomfort of seeing it. It is self-interest at work. That is why the man who was carrying Pergaein was amused. To him, there is no affront here. It is a daily part of his life in which the entire middle, upper middle and rich classes are complicit. One reporter who thought he was getting a creative angle is just a welcome Rs 50.