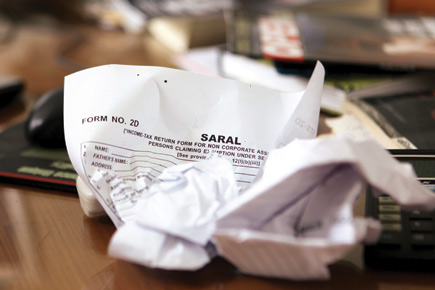 
It is an old grouse that I have against philosopher J Krishnamurthy. He asked very deep questions (‘What is the human mind?’) and did not really answer any. I would, in fact, challenge you to point out one question he raised that he actually answered. I think what he wanted to convey was that just because there are questions, it does not mean there are answers. Someone like him created the tax forms. I can imagine a clerk, an austere Tam Brahm possibly, secretly enlightened, sitting at his corner desk and chuckling as he created the many forms that constitute the tax papers. And his chuckles become loud echoing laughter as he now writes the list of tax exemptions under Chapter VI A–80 U: Cost of Medical Treatment for Self. What’s the percentage of your disability? Greater than 80 per cent or less than 80 per cent?’ (I’m told by knowledgeable people that there is an answer to this question, but I don’t believe it.)

Every year, the entire tax-saving ritual reminds me of the annoying zen master stories—the disciple asks a very good question of the zen master, who then asks the disciple to perform a set of meaningless actions and everybody, except me, gets the startling moral of the story. When I search for petrol bills or medical bills, I feel as if a zen teacher who looks somewhat like Pranab Mukherjee is making me do these moronic things so that I learn a valuable lesson about life.

Tax exemption is a trap. Since there is an exemption for the taking, people are tempted to do everything they can to get it. An Indian who would never accept a bribe of, say, Rs 2 lakh, would have no qualms about doing illegal things to obtain a tax relief of a similar amount. The lure of exemptions makes dignified and ethical people do cheap things. A reason why Port Blair is increasingly a popular destination for family vacations. Delhi to Port Blair through Calcutta on premium Jet Airways tickets (which are later cancelled)is the only way most people can achieve a ticket expense of Rs 1 lakh, the tax exemption limit of the Leave Travel Allowance (LTA).

LTA is an exasperating device. It tempts you with a saving of about Rs 30,000, but it is hard to achieve that without going to Port Blair. Also, you can claim it only twice in a block of four years. Why? And you can claim the expense for only one vacation in a year. Even though a travel expense of up to Rs 1 lakh is exempt, only domestic travel is eligible, not international. Why?

While a salaried person is taxed first and what remains is his earning, a ‘consultant’ can deduct most of his living expenses from the taxable income. In the pursuit of expenses, the consultant then goes through life collecting bills. A restaurant bill, presented as a business expense, can save him 30 per cent of the amount in taxes. So, he has reached a point when the good life comes at a 30 per cent discount.

When I had just entered journalism and was kept so poor by employers that I didn’t have to pay tax, senior editors would take me out for lunches, and I would be very impressed when at the end of it all, they took the food bills from the ledger and stuffed them into their pockets (or purses). “For tax purposes”, I would tell myself. Pocketing the food bill was a sign to me that one had arrived. Now, I am considering retaining the bills myself, but I am disturbed by the visual of a tax official somewhere going through my bills and wondering if such a huge consumption of Eggs Benedict and Ginger Garlic Prawns is really so essential for the press to do its job.

Tax exemption is also a game. There is a target you have to achieve. There is much happiness once you win. For instance, I can claim my land phone bills for exemption, but I have never made a call on it and I use very little broadband. Last month, my 23-month-old daughter was made to discover YouTube. There are eight songs that she likes and she has made us play them several hundred times. When the phone bill came, my distress was immediately replaced by a sense of triumph. I have to pay the bill with my money, but still, I have crossed the landline tax exemption limit. From the jaws of defeat, my daughter showed me the way.