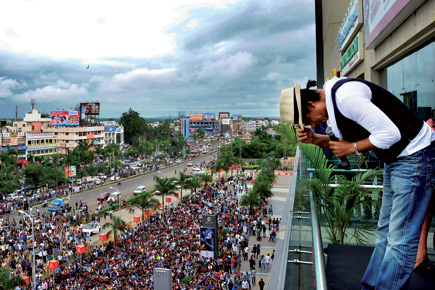 
What is a superstar but an irrational image etched in the hearts of a billion people. An image embellished day in and day out. Pilgrimages done to get a glimpse of them. Men and women falling in love, nurturing an imaginary relationship through decades as if it was flesh and blood. When unwell, nations rising in unison in prayer. An image crafted in hysteria and obsession. When everything is madness targeted at you, how do you survive it? And how do you survive it when it is slipping away, as inevitably it must as they grow old and flesh withers?

Chennai Express has now appropriated for itself a record in a brand new category, of the movie that made the fastest Rs 100 crore. It is precisely at this conveniently created moment of triumph that Shah Rukh Khan must perhaps ask all these questions of himself. Because, whether he understands it or not, his superstardom has long since plateaued. He is nearing 50. All his movies in the past two or three years have been superhits and across genres. And yet, it just didn’t register when compared to what a Salman Khan or Aamir Khan was doing in terms of splash. Om Shanti Om was perhaps the last movie which added to his superstardom. Now it is just momentum without fuel. Chennai Express might seem like it has broken the mould, but then all you have to do is look at another superstar two decades ago living in the last throes of his enigma then.

When Agneepath released in 1990, it was as if some part of the Amitabh Bachchan of old had been reignited. It turned out to be an illusion. The ratio of flops to hits kept creeping up, until not a single movie worked, no matter who directed them, no matter how good or bad they were. By the peculiar economics of Bollywood today, it is impossible for any of the Khans to make a flop. There is no way that any of their movies will not touch or come close to Rs 100 crore. The number is something that has been bandied about for the past few years, starting with the Salman camp.

It’s a suspicious number, impossible for anyone to independently verify. The Khans are like the permanent members of this club. Even a slow-paced thriller like Talaash goes on to that mark because of Aamir Khan. The formula is straightforward. Carpet bomb all theatres in the country. Spend on marketing as much as you spent to make the movie and you can do that because there is the cash. The biggest component of a movie is the salary of the hero and the Khans usually don’t take that, instead going for a share in the profits. The massive amount pumped into promotions and the curiosity of seeing a Khan movie will draw enough people to the theatres at least once. Rs 100 crore is a record that is broken even before the movie is released. The definition of a superstar is now one who can do this. If you can’t, then you are not. Ajay Devgn couldn’t with Himmatwala and, therefore, he is not as big as the Khans. The strange thing is that even though Himmatwala was said to have made more than Rs 50 crore, it was billed a flop.

Throughout the 1990s you saw Amitabh desperately hanging on to the image of a superstar and nose-diving. It is only when he gave it up that he made another space in the heart of India. Shah Rukh seems to be where Amitabh was at the beginning of his end. In interviews, he says that he has done different roles within the confines of popular cinema. It is true. But in all those movies, except perhaps Chak De! India, you only come back with the memory of Shah Rukh and not the character he played. It is far easier to remember his early movies. This is the case with almost all superstars, barring perhaps Aamir.

There is a reason for it. Till they become superstars, every actor has to give in to the director’s vision. He is one part of a larger whole. As they become successful, he becomes everything and movies are tailored around the image. For Shah Rukh to make anything memorable, he has to fail miserably.