The State of Music

Few states support alternative music in the country but things may finally be looking up for indie musicians, what with Kerala announcing state awards for independent music 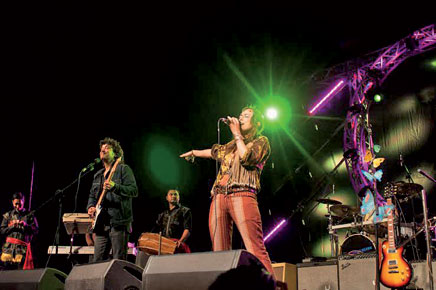 It’s highly unlikely that an Indian band would have performed a show against the backdrop of the ruins of Hampi. For the UNESCO world heritage site to be transformed into a performance venue, you’d need intervention in the form of a godman a la Sri Sri Ravi Shankar. Bengaluru folk rock band The Raghu Dixit Project [TRDP], who were on the Government of Karnataka’s department of Kannada & Culture’s radar, were lucky enough to perform at the Hampi Utsav in 2014. Only, the brilliant view of the ruins was obscured by a giant flex board, but then, few events organised by the state government live up to private shows. Says TRDP’s bassist Gaurav Vaz, “The department of Kannada & Culture and the district collectors of each district in Karnataka organise cultural ‘utsavas’ every year. I’ve seen people from different villages around the area walk several kilometers to be a part of these utsavas. When people talk to me about the indie scene, I tell them that this is like nothing that they have ever seen. We’ve played to crowds of about 150,000 people. The average crowd at these utsavas is 50,000.” About 20 such utsavas are organised every year in Karnataka.

The State government of Nagaland also stands out in its support for alternative music. Nagaland’s Music Task Force [MTF] has organised the Hornbill Rock Contest, which is part of the Hornbill Festival, for 10 years in a row. The contest, which invites bands from across the country to perform and showcases local artists, is an event that is high on both talent and production value. Not only have very few bands made it as far as Nagaland for a show, fewer have witnessed the kind of unparalleled musical skill that North-east Indian artists bring to Hornbill. Over the years, bands such as Sky Rabbit from Mumbai and The F16s from Chennai have performed and won at the festival, and more and more bands from “the mainland,” want to snag a spot at Hornbill. But for the Ziro Festival of Music held in a remote part of Arunachal Pradesh, a lot of bands and their fans would have never made that trek off the tourist map. The festival was first held in 2012 with the support of the Arunachal Tourism Board and recently wrapped up its fourth edition. The event emphasises the role that state support can play in promoting the arts.

Earlier this month, the Kerala state government announced that it would award local independent musicians. Violinist and composer Manoj George who pushed for these awards to be instituted feels that alternative musicians have been ignored for too long. George arranged two tracks on Winds of Samsara, the album composed by Bengaluru-based Ricky Kej and flautist Wouter Kellerman from Johannesburg, which won a Grammy this year in the World Music Category. Earlier this year, George was honored for his work on the album, which is also when he voiced his opinion on the need to award independent musicians. He says, “I happened to meet the CM of Kerala at this function and spoke to him about awards for independent musicians. He asked me to mail him a proposal.” Two months after George’s mail, Kerala’s cultural minister KC Joseph announced awards for independent music, which encompasses all forms of non-film music, including rock, folk and even devotional albums. Says George, “No state has done this before.”

At the Centre, of course, rock falls under a list broadly titled as ‘Modern Experimental Works of Dance and Music including Light & Popular Music’. Compiled by the Indian Council for Cultural Relations [ICCCR], the list includes 13 forms of music and dance, where ‘Rock Band,’ is one such category that has been lumped with ‘Popular Music’ and ‘Bollywood Style’. If that wasn’t offensive enough, ‘Whistling’ gets its own category in ICCR’s listing. The ICCR is the equivalent of arts councils across the world and are responsible for promoting art forms on an international stage. A handful of Indian groups including Blues band Soulmate from Shillong and folk rock band Indian Ocean are on ICCR’s panel. What does it mean for the band? Every once in four years, an empanelled band is selected to tour abroad with travel costs and part of the fee covered by the ICCR. Most often, the band has no say in where or when they perform. As The Raghu Dixit Project’s bassist Gaurav Vaz puts it, “It would help [bands] if a consulting role in these organisations was given to people who have been working in the field of music. Organisations such as the ICCR and state-run councils have the right intent, but there is too much red tape involved.”