The Revenge of Rajnikanth

Those who try to understand his extraordinary fame are wasting their time. 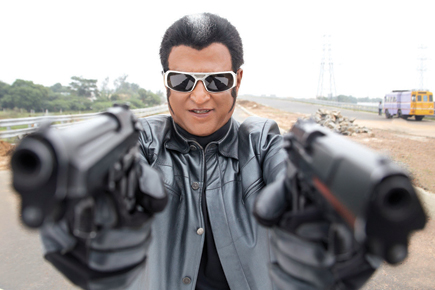 Those who try to understand his extraordinary fame are wasting their time.


People who spell Rajnikanth without an ‘h’ have begun to write about him. And what they see with their north Indian eyes is a dark man whose improbable power dwarfs the fame of prettier men in Bombay. Through condescension masquerading as awe, they try to understand how he became the most expensive actor in the country, and why the impending release of Enthiran is another epoch in Indian cinema when Tamil is merely a regional language once spoken by Rekha. And they decide that his fame is a consequence of his reassuring Dravidian ugliness, and of the deep cinematic insanity of Tamilians. This is rubbish.

I spent the first 20 years of my life in Madras, and to me, Rajnikanth is another proof that not everything can be analysed just because there is something called analysis. There is no reason why Rajnikanth exists, there is no reason why he did not retire as a Marathi bus conductor, and no reason why he instead became the Superstar who can have theatres go up in  flames if he is ever killed at the end of a film. There is nothing in him or in Tamilians that explains his fame. He is the very end of analysis. Some things happen for no reason. And it is no coincidence that the people who really love him are people who do not know that there is a form of employment called analysis.

A few months ago, towards the end of an interview with Aamir Khan, I asked him if he would make faces for the photographer, expressions that represent a range of human emotions. He said that he would feel humiliated if he did that. Without the pretence of art, it was debasing for a fully grown man to make faces. Yet, acting is fraught with the risk of debasement. In fact, the greater the loss of physical dignity, the greater the rewards. The fame of Rajnikanth rests almost entirely on the many ways in which he has debased himself on the big screen.

He has no talent, an unremarkable body, and has had no hair for much longer than we realise. When he puts his right elbow on his left palm and the left elbow on the right palm, he demands that everyone accepts it as dance. And his ability to toss a cigarette in the air and grab it with his mouth is attainable even to my mother. Have no doubts, even to Tamilians he looks grotesque in leather shirts and pants and previously unseen shoes. I have watched his films in the cheapest theatres in Madras and know exactly what happens when he makes his grand entry, boots first. The screams and whistles in the theatre are not the awe of respect, but an expression of love for a beloved clown. Nobody in those theatres knew why they were reacting in that manner to him.

Tamil Brahmins preferred Kamal Haasan, who was more talented than a bride—he could sing, he could dance, he could laugh and cry at the same time. Naturally, they had an innate contempt for Rajnikanth, but in time discovered the fake charm of appreciating him. There was something intellectual in calibrating the folly of the dark masses and renaming it ‘phenomenon’.

The numbers of fake Rajni fans have grown over time—many of them today are the English-speaking variety who labour under the delusion of their own intellectual tolerance. In reality, they are somewhat dim people with the external trappings of intelligence, whose cerebral austerity permits them to tolerate and even enjoy the inanity of Rajnikanth.

Rajnikanth has the natural intelligence of a good heart, and the gift of endearing himself to his business associates by being respectful. But I also feel that when he does those things on the screen, he is mocking us. I feel he is telling us, you built a world that was so hard on me, a world that needed talent to survive, a world that said it was in the pursuit of intelligence and that a person like me had no place at the very top. In vengeance, I reveal the truth. Now watch me toss the cigarette in the air, watch me fire a bullet to light it, watch me grab it in the mouth. And listen to the applause.