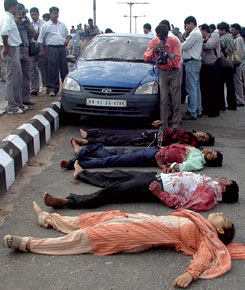 
Stupidity is contagious, but only rarely is the contagion dangerous. Today, we are faced with this rarity. Prominent journalists and self-styled public intellectuals have come to believe that we need to set aside the very fundamentals of the Constitution, the idea of an independent judiciary and the Rule of Law if these in any way obstruct the functioning of the Intelligence Bureau.

In the context of the Ishrat Jahan ‘encounter’ and the role of IB officer Rajinder Kumar, Praveen Swami of Firstpost has argued, ‘Lawyers have numbers and words for these things: 302, 304, 364, 120B, the Arms Act, the Explosives Act. These are the laws India’s intelligence services break every single day—to defend the Republic. To comprehend this is to comprehend why India’s intelligence services simply won’t—at least in their present form—survive the Ishrat Jahan Raza murder investigation. Ever since their inception, the Intelligence Bureau and its sister-services have functioned without any legal mandate. This means authorisation for anything they do.’ Shekhar Gupta, editor of The Indian Express, has made much the same argument.

Let us take the cynical, or, depending on where you stand on national security, the pragmatic view. Some of what Praveen Swami says is correct, but the success of these operations is also based on deniability. Across the world, whatever the intelligence agency, when agents make a mistake, they are left to fend for themselves. Rajinder Kumar did not even pretend to hide his tracks; the evidence is rather stark that he was one of the moving forces behind the encounter. Never does an entire agency endanger itself for the sake of an individual, so what exactly is going on in the Ishrat Jahan case?

The subtext in such writing is that those who question the IB’s role or hold it to account are harming the national interest. Let us stick to pragmatism, because Swami and his ilk have made it clear they scoff at ethical and Constitutional arguments. We do know that a Punjab Police officer today can’t defend himself in a murder case by claiming that others in the force have committed a murder in the past, the same way an MP police officer can’t cite the example of dacoity to defend a murder today. And most of us, even though we cannot defend this on Constitutional grounds, will probably agree there is a difference between shooting down a dacoit in the Chambal ravines and murdering a 19 year old girl. And despite this distinction, if there is enough evidence, police officials will be tried and jailed in either case.

The IB ensured Ishrat Jahan was held in custody for a prolonged period in Gujarat in 2004. Let us ignore the question of her guilt and assume she was indeed named by David Headley. But there was no existential threat to the nation, or even to a village, from her once she was in custody. Apparently, the IB has forgotten any other way to act simply because the agency has never been held to account. It follows that Rajinder Kumar has to be defended by the IB and those who speak on its behalf, because he is no exception.

Which is why, if this investigation does unravel the framework (or its absence) that lets the IB operate in this fashion, then it is precisely what we need. Because to accept what is being argued on the behalf of the IB is to concede that its officers have the right to kill anyone, anywhere, on any pretext without any questions asked.

This discourse in favour of the IB is not just restricted to security hawks; it has already ended up damaging our wider intellectual life. In a recent piece in the Indian Express, Pratap Bhanu Mehta has argued, ‘First, the UPA came for the roads sector… Then they came for institutions. They always had. This has been Congress DNA for four decades. They drew up a list of institutions that remained unscathed: Parliament, the IB, bureaucracy and you name it.’

There is much reason to criticise this UPA government, but the Ishrat Jahan case is not one of them. The analogy Mehta has used is not just stupid, it is deeply offensive. The original quote he has chosen to adapt goes:

This was said by Martin Niemöller, a Protestant pastor and public critic of Adolf Hitler, who spent several years in Nazi concentration camps. Does it even have to be said that the UPA coming for India’s IB is not quite the Nazis coming for Europe’s Jews?

Mehta had once written, ‘Liberalism places the freedom of individuals, their presumptive equality and claim to be treated with dignity at the centre of attention.’ Perhaps, he now thinks Ishrat Jahan is not an individual. Whatever his reasons, the nature of such public discourse only makes it clear that the defence of the IB is the real threat to the future of our republic.