THE HOUR OF THE PROTEAS 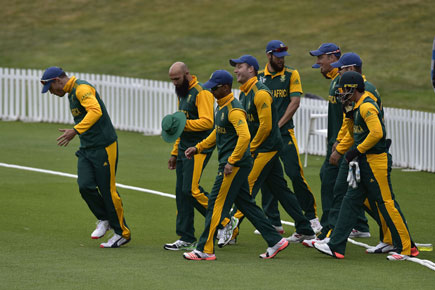 Back in 1987, when the Indian Subcontinent hosted the World Cup for the first time, Australia—captained by Allan Border—were surprise winners. By 1992, when Australia and New Zealand got the event for the first time, Australia were a serious side, and most people’s favourites to lift the trophy. In Auckland, for the tournament opener, they ran into an inspired Martin Crowe, who chose to open the bowling with Dipak Patel, an offspinner. A flummoxed Australia lost.

Subsequent thrashings at the hands of South Africa, the new kids on the One Day block, and England left them needing to win in Perth to have any chance of progressing to the last four. The opposition? Imran Khan’s cornered tigers, who had won just one of their first five games in the competition. Pakistan made just 220, but with Aaqib Javed, Mushtaq Ahmed, Imran Khan and Wasim Akram all contributing with the ball, the hosts were shunted out for just 172.

“We didn’t prepare for that tournament well because we were playing Test cricket against India only a few weeks out,” said Border to Fox Sports in the build-up to the 2015 tournament. “We hadn’t really targeted the World Cup with the right planning and the subtle tactics you need and probably didn’t really even know the final make-up of our side.”

That last sentence should set some alarm bells ringing in the Indian camp. Back in June 2013, MS Dhoni’s team had made imperious progress through the Champions Trophy, beating South Africa, West Indies, Pakistan, Sri Lanka and England back-to-back to win the trophy. The batsmen, led by the swashbuckling Shikhar Dhawan, made plenty of runs, the pace bowlers made regular incisions and the spinners were miserly enough to make Scrooge look generous. Seldom do teams perform to their full potential. In that tournament, India did.

The picture is altogether different more than 18 months on. Dhawan has the sophomore blues, the pace bowlers are as accurate as toddlers with water pistols and there’s nothing in the Australian pitches to aid Dhoni’s conservative spin attack. Ishant Sharma has flown home, and the composition of the playing XI continues to be a matter of conjecture.

Matthew Hayden spent the better part of the India- Australia Test series in the Star TV studio in Mumbai. For the World Cup, he is again part of the commentary roster. Leaving the Adelaide Oval on 8 February, an hour after Australia had routed India by 106 runs in a warm-up match, he was in no mood to give the Indian team the benefit of doubt. “They don’t seem to have learned anything from the time they’ve spent here,” he said. “They keep making the same mistakes over and over.”

Elsewhere in the Australian media, there was barely disguised contempt for the Indian strategy of opening the bowling with Stuart Binny and Bhuvneshwar Kumar, who both struggle to nudge the speedometer past the 130 kmph mark. On pitches such as the Adelaide Oval, which offer next to no lateral movement, and under cloudless skies—next to no chance of extravagant swing—the lack of pace makes them cannon fodder. The acid test for India’s bowlers will come in the second game, when they take on AB de Villiers, Hashim Amla and the rest of a power-packed South African line-up.

The South Africans will hope, like Robert the Bruce, that they are seventh time lucky. Time after time, they have gone into the competition as one of the favourites and fallen at the first significant hurdle. In 1996, they won each of their five group games and then rested Allan Donald for the quarterfinal in Karachi. Brian Lara made a superb hundred and South Africa were out.

In 1999, they needed one run from three balls in the semifinal against Australia. All that Donald and Lance Klusener managed was a calamitous mid-pitch mix-up that ended in a run-out. With the game a tie, Australia went to the final by virtue of having finished higher in the Super Six stage.

Even in 2011, they topped a group that included India and England, progressing to what was seen as an ‘easier’ quarterfinal against New Zealand. They kept their opponents under 250, cruised through the first part of the chase and then crumpled like a Coke can once Daniel Vettori and his bowlers exerted some pressure.

Despite that dubious history, South Africa are very much the team to watch in this competition. Their batting line-up is inordinately gifted. De Villiers is the most accomplished all-format batsman of his generation. Amla isn’t far behind. Both are pleasant and phlegmatic characters, not prone to the kind of ugly behaviour you sometimes see from other batting superstars like David Warner and Virat Kohli.

In Dale Steyn, South Africa also have the best bowler in the world. On pitches with bounce, Morne Morkel can be almost unplayable. When it swings, Vernon Philander, like Steyn, can make the ball curve like a parabola. If they play to their potential, they won’t be beaten.

If they slip below those high standards, however, both hosts are well placed to take advantage. Australia thrashed South Africa 4-1 in a bilateral series last November. Warner and Aaron Finch are a terrific opening combination, while both Mitchell Marsh and Shane Watson are legitimate allrounders, not bits and pieces like Binny. But it’s the pace reserves that are most impressive.

The two Mitchells, Johnson, with the Mexican-bandit moustache, and Starc are seriously quick. Josh Hazlewood is tall and offers impressive control at genuine pace. Patrick Cummins is just 21 and one of the most exciting youngsters in the game, also capable of bowling well in excess of 140 kmph.

The joker in the pack is Glenn Maxwell. In a team heavily reliant on pace, his offspin is merely serviceable. In the final of the triangular series that also featured England and India, he took 4 for 46. But it’s with the bat that Maxwell really makes heads turn.

As far as he’s concerned, the reverse sweep is just another shot, and he plays it with such assurance that the fielding team’s plans are easily shredded. Before the tournament began, he told a small group of journalists that he disliked his nickname, The Big Show, and saw himself very much as a team man who tailored his play to the team’s requirements. Like de Villiers, another with an audacious repertoire of strokes, Maxwell is a game- changer with the ability to nonplus the opposition.

New Zealand have come to the boil just at the right time, thrashing both Sri Lanka and Pakistan in the build- up to the big event. Like Australia, they too have a wonderful array of pace bowlers. Adam Milne, Tim Southee, Trent Boult and Mitchell McClenaghan all combine real pace with great accuracy. In favourable conditions, they will be a handful for any line-up.

In Brendon McCullum and Ross Taylor, they also have two batsmen capable of keeping up with the likes of de Villiers and Warner. Luke Ronchi, who briefly played for Australia, provides real impetus lower down the order. Back in 1992, Crowe’s leadership took them as far as the semifinal. After reaching the last four six times in ten World Cup appearances, there is a real sense that this team could go even further.

The outlook is a lot bleaker for the Asian sides. Bangladesh, Afghanistan and the United Arab Emirates will be satisfied if they can be competitive against the established teams. Pakistan, with Saeed Ajmal not part of the picture and Junaid Khan injured, have perhaps their weakest bowling line-up ever at a World Cup. Sri Lanka’s bowling is Lasith Malinga, playing after six months out, Rangana Herath and not much else.

In Asian conditions, bowling weaknesses can be camouflaged by batting strength. In Australasia, it’s hard to see a weak bowling side making the final four. Even unfancied England, who can call on James Anderson, Stuart Broad and Steven Finn with the ball, look a more dangerous prospect than the Asian sides.

So, are there any grounds for Indian hope? Yes. For one, under Dhoni’s leadership, they have usually been a side for the big occasion. The team is packed with experience, and the top six is a roll call of potential match-winners. The key could well be Dhawan, the mustachioed maverick who told an open-media session that he doesn’t believe in looking back, at good times or bad. Start him up, to use Rolling Stones’ speak, and India could yet rediscover their mojo.

Realistically though, it’s hard to see India progressing beyond the semifinals. Luck plays a big part once you get that far, as does experience of such situations. But ultimately, there’s no substitute for quality. And on the bowling front, India just don’t have what it takes to win this six-week marathon. Look instead to the Proteas, who look primed to end more than two decades of hurt.