The Hidden Treasure of Delhi

The dilapidated Bikaner House is being restored to its original glory as a centre of culture and leisure. Conservationists are at work 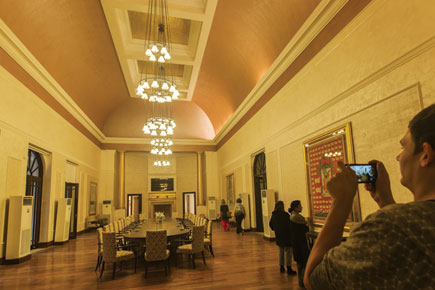 ‘A city isn’t so unlike a person. They both have the marks to show they have many stories to tell. They see many faces. They tear things down and make new again’

Tearing things down and making anew has been intrinsic to the evolution of many great cities, but there aren’t many like Delhi, which holds seven incarnations in its embrace. Delhi has many stories to tell, much of it through its heritage buildings and art. How these are preserved and translated into 21st century living spaces, culture and national symbols contributes to the unique character of every city. Some like Agra have one single claim to global fame. From Qila Rai Pithora in 732 CE to Shahjahanabad built in 1639, Delhi is littered with the legacy of seven empires, much of it sacrificed to the needs and idiosyncrasies of subsequent rulers.

Shahjahanabad, now Old Delhi, was already in ruins when the last Mughal Emperor, Bahadur Shah Zafar, wrote nostalgically from exile: ‘Delhi was once a paradise, Where love held sway and reigned; But its charm lies ravished, And only ruins remain.’ And so the British began the construction of New Delhi in 1911 as a capital befitting an empire on which the sun would never set.

The heart of this empire found physical expression in a grand central boulevard (Rajpath) leading to the Viceroy’s Palace (Rashtrapati Bhawan) with its imposing dome and immense Mughal gardens on one end and the commemorative India Gate, reminiscent of the Arc de Triomphe, at the other. The area around the Gate was Princes Park, where maharajas were once given large estates to create worthy residences in the capital—a necessity once they were expected to attend the annual Chamber of Princes meetings in Delhi with the Viceroy from 1920 to 1947.

In the two decades after 1920, several princely residences embellished the city’s central boulevard, all built strictly according to Edwin Lutyens’ Anglo- Indian architectural guidelines. They were designed to merge classical English Palladian styles with Indian features like chhajjas and chhattris—a sort of ‘Indian Deco’, as conservation architect Abha Narain Lambah puts it. Care was taken not to overshadow the Viceroy’s Palace, the world’s biggest residence for a head of state until 2014.

By the late 1930s the periphery of India Gate boasted magnificent residences of the rulers of Hyderabad, Patiala, Jaipur and Bikaner, with Travancore, Kerala and Baroda to the east. This then was the stunning contemporary architectural jewel at the empire’s seat, a symbol both of India’s erstwhile greatness when it commanded 27 per cent of the world’s GDP and its subsequent domination by an imperial force.

Every great city has a soul, and depending on one’s sensibilities, it is reflected in certain quarters of the city. For instance, the artists’ quarter of Montmartre in Paris is alive with the ghosts of Picasso, Dali, Van Gogh and Monet spilling out in colourful T-shirts and tourist souvenirs under the Sacré-Coeur basilica. Or take the historic heart of Rome, ‘the eternal city’ where 2,500 years of empire are consecrated in vistas of magnificent arches, domes and vaults. Or the towering modern facades of Wall Street in New York, where money never sleeps and global financial markets are unmade for profit.

For Delhi, if there was one place which could have symbolised both past glory and present aspirations, it would be within the environs of Rajpath, with its fountains, rolling gardens and magnificent mansions all coming to life in the annual Republic Day parade when the country’s best is on display.

It’s a sad reality that a thick pall of pollution now hides more than it displays on Republic Day and the princely homes around India Gate have become government offices, courts, a national museum, and, in the case of Bikaner House, a bus terminal. General Maharaja Ganga Singh of Bikaner, who ruled the state from 1888 to 1943 and was the only non-White in the British Imperial War Cabinet during World War I, must have turned in his grave at the fate of his beloved palace.

Modern India’s neglect of its princely heritage seems to have got mixed up with its rejection of empire. It’s as if both British and Indian rulers colonised us, and in rejecting one, we rejected the other. This is regrettable, given how India’s legendary wealth and flowering of arts, culture, mythology and religions had made it a pre-eminent power back in the days when indigenous dynasties held sway over different parts of the Subcontinent.

Even today, despite decades of neglect and attrition at the hands of Indian governments (especially Indira Gandhi’s, which abolished privy purses for royal families), India’s maharajas are recognised abroad as symbols of wealth, as great patrons of art, not to mention crafts and traditions, and as builders of world class edifices. It makes for irony. “Modern India doesn’t have a single globally recognised luxury brand,” says couturier Ritu Beri, who has floated the Luxury League to this end, “But fashion houses abroad mine the mystique of the maharajas to brand their products.”

If Cartier takes pride in exhibiting the jewellery it made for the maharajas, why not Indian jewellers?

It took a leader imbued with India’s princely traditions of art patronage and an understanding of antiquity as a route to development to show a different way. Rajasthan Chief Minister Vasundhara Raje brought together some of the country’s most talented restorers, artists, master craftsmen and curators to transform Rajasthan into a dream destination. “She understands that the greatest asset the state possesses is its heritage,” says Lambah. “And by restoring beautiful monuments in little known villages like Wair, with its stunning gardens, pleasure pavilions and Safed Mahal, she can create new circuits for tourists and boost local economies.”

Lambah was asked by Raje to restore Bikaner House at India Gate, among other projects, a little over a year ago so it would serve both as a tasteful public place for a coffee, a concert or a conference, as well as a lure to the splendours of Rajasthan. Gone were the bus terminal, the kiosks and the sarkari daftars with their paan stains and Public Works Department gear. In its place are the original polished floors, luminous chandeliers dangling from impossibly high ceilings, impressive colonnades, landscaped lawns and an oasis of peace where the breath of Rajasthan’s princely past is open to the public. “Bikaner House was designed by the British architect R Blomfield, and even though it was built in 1938, it is still in great condition,” observes Lambah, “Apart from tackling the dampness, the rest was mostly cosmetic restoration.”

Unlike the magnificently restored Hyderabad House that is only open to government dignitaries, or Patiala House where one wouldn’t want to visit save for a court summons, or Jaipur House that attracts art enthusiasts, Bikaner House is the only princely mansion on India Gate that is open to the public. It’s also precious for the variety of facilities it offers in a city that is largely denied the use of its most interesting buildings.

Described by Raje as not just a gateway to Rajasthan but a home for the nation’s art, crafts and entertainment, Bikaner House has plenty to offer apart from an art gallery called Spirit of India. These include the beautiful and affordable textiles and crafts at designer Vivek Sahani’s boutique Vayu, where merchandise is displayed in three sections and is sourced from the ateliers of reputed craftsmen but finished by contemporary designers. The visual arts gallery leads to an open courtyard, Chandini Bagh, whose central dais set in a lawn is perfect for weekend concerts and the like. A corner pavilion hosts craftsmen, some of whom are from Laila Tyabji’s atelier, Dastakar, while an adjoining room serves as a space for book launches, private dinners and other such events. “The idea is to make the building self-sustaining,” says curator Priya Pall, who will oversee the art events, business conferences and other functions that are expected to fill the rooms of the mansion and its garden spaces. “Bikaner House will also have a café and a fine dining restaurant by early next year,” she adds.

Pall has the support of an advisory committee that works to ensure the project remains self sustaining and enriches the cultural life of the city. Among the members of this panel is publisher Malvika Singh, who speaks of the broad context in which the renovation of Bikaner House took place. “Rajasthan is experiencing a slew of restorations and cultural activities led by Vasundhara Raje to provide a complete experience for visitors,” she says.

The international festival calendar features some wonderful sponsored events, be it the Jaipur Litfest in January, the World Music Festival in February or the Naval Philharmonic in March. All 18 state museums are in the process of being restored with the Jawahar Kala Kendra being upgraded to a Contemporary Arts Centre under the stewardship of artists Bharti Kher and Pooja Sood.

Under the ‘Art in Public Spaces’ brainchild of the Chief Minister, nine railway stations will be painted by local artisans. “Sawai Madhopur with its tiger motifs is nearly complete. Both artisans and villagers are involved in the project. I believe the station is spotless,” says Singh. Hoardings in Jaipur now boast Jogi and Bhil art while auto-rickshaws are painted by tribal and folk artists. Lambah is particularly excited about a step-well that excavations for the Jaipur Metro has revealed. “We found photos from the 1850s showing a beautiful kund and we excavated this 150-year-old structure at the badichaupal (roundabout) complete with carved marble gaumukhs. We are putting them back in the Metro after restoration, so the station will lead to the step well. It will be unique.”

Like the rest of the team, Lambah and Singh are all praise for Raje’s dynamism, commitment and understanding of architectural design; and most of all, for her plan to ensure the sustainability of the initiatives. But beyond the excitement of restoration and events, Raje’s efforts and others like them are a good way to generate national pride at a time of increasing disenchantment with our professional and physical environments. It’s time to learn from our neighbours: this year Condé Nast revealed that Bangkok is the world’s second most visited city for its fabulous palace complex, temples, museums, crafts, food and logistics.

Pride in one’s country needs to find expression beyond the cricket field and Republic Day parade. It should be on display at the heart of its capital.