The Games We Play

Our strategies for surviving singlehood may not save us 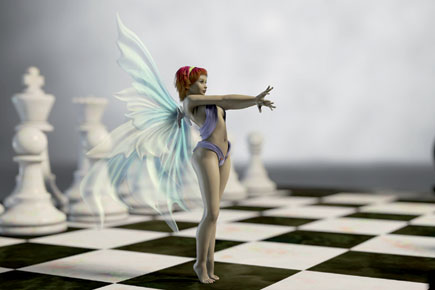 Our strategies for surviving singlehood may not save us


My father is a heart patient. So while most children spent their childhoods splashing in pools and playing tag on vacations, I spent them huddled over the chess table with Dad. Under his tutelage, I developed my own style—randomness. Despite his many efforts to teach me the best moves, I preferred to let instinct decide. Not having a strategy became my strategy. Last week, out of the blue, Dad challenged me to a game. A few minutes in, he decided it was a good time to discuss the similarity between chess and life. I think his objective was to distract me into making a careless move, but something he said stuck in my mind. According to Dad, I live my life the way I play chess—with experience-based creativity. It’s the reason I played defence whenever I could. I preferred to respond to, rather than initiate an attack.

A couple of days later, Dad’s words came back to me while having lunch with a friend at the new Japanese restaurant that all our friends had been raving about. As we dug into our maki sushi, she told me about the conversational French classes she had recently enrolled in. Then she made an interesting observation, “You know, the first thing I noticed was that we were an all-girls class. In fact, the first thing all 10 of us noticed, and loudly expressed our disappointment over, was that there were no boys. How sad is it that no matter where we go or what we’re doing there, we’re all always hoping to meet someone? Are we really that desperate?” This is a girl, who, when we first met a little over a year ago, had to be bullied into sending over a glass of wine to a man she found interesting. Today, as she enters a room, she knows exactly who she wants to flirt with, who are the maybes and who are the definite no-nos. When had the transformation taken place?

In the course of our conversation, I learned many things about being single. I even (finally!) saw the silver lining of being stuck in a city I have come to detest with every fibre of my being. The one good thing about staying put in the city where you grew up is that there’s always someone to be your ‘plus one’—a friend, a friend’s friend or a crush from many lifetimes ago that will resurface to rescue you from a Friday night of watching reruns of Friends. Which makes it so much easier to apply my chess strategy to the dating dance—here too, I follow, not lead. I flirt back, not flirt with. I accept invitations, not issue them. Stereotypes: 1, Feminism: 0. Yes, I’m sufficiently ashamed of perpetuating this cliché. It helps that in the last one year, thanks to this meticulous chronicling of my dating history, even a cursory glance at the column is enough for a man to determine whether his invitation for an after-work drink would be welcome.

But my friend pointed out an alternate single-girl reality. Women whose little black books don’t reflect decades of interaction with the men of the cities they find themselves in. Women who are in no danger of fossilising in their land of birth. I’ve often seen comfortably married women and those in long-term, exclusive relationships get their panties in a twist when they see single women around their partners. I’ve often heard them call single women predators. Like any self-respecting woman, I blanched and scoffed loudly at the disgusting new stereotype for single women that surfaced last year—the Smash ‘n’ Grab Woman, the lone she-wolf who thought nothing about smashing someone’s marriage and grabbing her man. But I’d never heard a single girl admit to being a little predatory. “Maybe it’s true,” my friend said. “Is it politically incorrect to admit that many times, the only reason I show up at parties, take up activities and agree to meet new people is because I’m hoping to find someone I could seriously date and not just hook up with? That I don’t waste time on social niceties when I know I’m not interested in a person? As I understand myself better, it takes very little time to figure out whether a person is right for me. And since I know it with absolute certainty within minutes of meeting a person, I’m accused of being ruthless in my interaction with them once I’ve crossed them off my list. And who wants to be with a woman who actually knows her mind? It’s a vicious cycle. But my biological clock is ticking and I can hear it loud and clear. How do I ignore it?”

I’ve always thought of the biological clock as an evil device attached to a time bomb. But at what point did that time bomb get attached to a suicide bomber’s jacket?