On Telangana, the party displays an attitude that will hurt it more than it realises 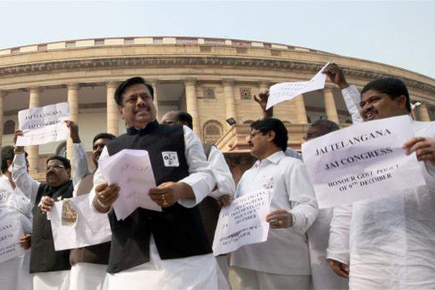 On Telangana, the party displays an attitude that will hurt it more than it realises


A few days after the Congress Working Committee resolved that the UPA Government should move ahead with the creation of Telangana, Andhra Pradesh Chief Minister N Kiran Kumar Reddy chaired a meeting of pro-United Andhra legislators of the Congress. After the meeting, Reddy shot off a letter to Congress President Sonia Gandhi saying that the local leadership had ‘resolved’ that the state should stay united. Apart from the CM, the state Congress chief Botcha Satyanarayana, 18 ministers of AP and over 70 sitting and former MPs, MLAs and MLCs had signed the letter. Clearly, while the Congress’ central leadership claimed to have taken all affected parties into confidence before announcing the creation of Telangana, it ignored its own leaders in the state.

As a result of the confusion created by the Congress, violent protests continue to disrupt normal life in the Seemandhra and Rayalaseema regions of AP, with government employees in 13 districts on an indefinite protest. For the first time in nearly four decades, the bus service between Tirumala and Tirupati has been suspended; state road transport employees are off work to protest the bifurcation of the state.

Meanwhile in New Delhi, nearly half of the already delayed Monsoon session of Parliament has been drowned by the din over the state’s division. In five of the first seven working days of Parliament, barely any business was conducted by the Lok Sabha because of the ruling party’s own MPs shouting slogans in favour of a united Andhra. Disruptions on the issue forced the chair to repeatedly adjourn House proceedings, including in Question Hour. On 13 August, day 6, when a handful of MPs of the Telugu Desam Party still continued to oppose the move and shout “We want Justice” slogans in the well of the Lok Sabha, the House was adjourned repeatedly and the planned discussion on the Food Security Bill was put off till the next day.

Disruptions continued on day 7. The bill can now only be taken up after the House meets again on 19 August.

The smugness of the Congress was on display when MP Sandeep Dikshit appealed on behalf of the party to TDP members to let the House function. Pointed out that the Congress had failed to rein in its own MPs earlier who were causing disruptions, Dikshit said his party colleagues had caused disruptions for “four-five days” which the party considers reasonable time for such “democratic protests”. But TDP MPs protesting over the same issue the sixth day, in the Congress’ view, amounts to holding the nation to ransom.

It was the same attitude that was at play when the Congress announced its Telangana decision on 30 July, ignoring the views of its state unit and leading to widespread protests. It had sat on the promise long enough and only reacted, not acted, for the sake of political expediency. The creation of Telangana was included in the UPA’s Common Minimum Programme as early as 2004, but was left for the last lap of the UPA II regime before the 2014 polls, not because the Congress had thought out the issue or consulted various stakeholders, but because it wanted to contain losses in the next General Election.

Opinion polls have predicted that the Jaganmohan Reddy led YRS Congress will inflict heavy losses on the Congress. With both the YSR Congress and TDP opposing the planned bifurcation, the Congress hopes that the announcement will give it a definite edge over the two parties in the Telangana region. But again, these calculations have been done sitting in Delhi by the central leadership without paying attention to sentiments in the much larger Seemandhra region, which has more than half of the state’s Lok Sabha constituencies.

More than a fortnight after the announcement, the Union’s officiating Home Minister P Chidambaram declared that there is no timeline for the new state’s creation. The last time the UPA had said it would create Telangana, it was Chidambaram who had made the announcement— back in December 2009. Following similar protests earlier, the UPA announced it was putting the decision on hold to evolve a consensus first. Three committees were set up by the UPA to look into the Telangana issue. A part of the Srikrishna Committee report has been withheld while the outcome of the earlier Rosaiah and Pranab Mukherjee Committees is unclear. The kneejerk announcement has only created confusion over the status of Telangana today.

The Government is not likely to introduce a bill to effect the bifurcation in this Parliament session. Whether there will be another session before the next polls remains unclear. The UPA Government has been unable to run Parliament in the last few sessions. Yet, there is a section within the Congress that still believes that it need not try to run Parliament efficiently because it will not affect its electoral prospects as long as it gets its poll arithmetic right. Opinion poll after poll has forecast that the Congress’ tally of Lok Sabha seats will go down in the next General Election. The ruling party, on its part, has only a mix of gimmicks and smugness to offer in response. All this will do is hasten the party’s downslide.