The balance of power after the World Cup 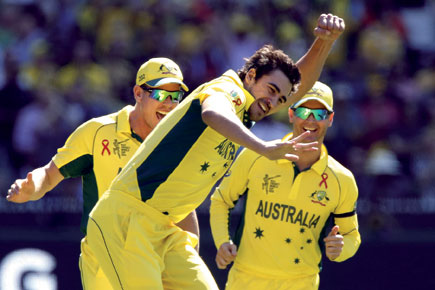 Supremacy in cricket is such a contested concept that it is tempting to quickly recap what may or may not have been settled with Australia’s victory in this highly engrossing World Cup. Certainly, the best team won, on recent form and equally with their ability to raise their game to the occasion. It takes Australia onward from where were in 2007, when they won their third consecutive title to fit into the arc of their complete domination of cricket. India punctuated Australia’s possession of the World Cup just for that 2011 title, but it’s not quite a return to an older status quo. Australia are still not the team they were back then, the squad against which every other in the international fray could measure themselves, but more on that in a bit.

Because with their all-round team effort in the final of the World Cup, Australia closed the loop on a more consequential episode in their long summer. And it is worthwhile returning to the details of that incident as it has lasting questions for the game. Australian Phillip Hughes’ death, last November end, in a domestic match after being hit on the neck by a short one had set the season going on a sombre and staggered note. Cricket immediately halted in mourning. India’s practice match was called off, Pakistan and New Zealand suspended their Test match in Sharjah for a day, and the India-Australia opening Test too was postponed. Michael Clarke, expectedly and gracefully, dedicated Australia’s World Cup victory to Hughes, but it’s not yet clear if the grief and bewilderment that gripped cricket on his death have been dealt with.

The manner of Hughes’ injury had called into question the conduct of the essential drama on the cricket field, the face-off between batsman and bowler. The man who sent down that delivery, the subsequently inconsolable Sean Abbott, had done no more, and certainly no less, than what was demanded of him by his sport, to bowl as best as he could. Who’s to know if that fateful day Hughes had a fleeting doubt about going for a big one or getting out of harm’s way in self-preservation—but cricket gear made more protective and comfortable by advances in design and material was believed to have shrunk the probability of grievous injury. Hughes’ death focused the sport’s attention squarely on that assumption, raising the question of what dangers cricket must address while keeping the contest as keen as possible. I’d like to believe that the World Cup would have been dedicated to Hughes no matter which team won. The occasion demanded so. But the process of actively assessing the bat-ball equation will be a longer one, and cricket’s chronically evasive administrators must not dodge it—for the sake of those who play the game and those of us who watch it. Danger is part of most sports. How each one keeps up with the curve in limiting the chances of injury determines its progressiveness. Cricket needs to step up.

In the end too, and rather unexpectedly at that, bowlers were adjudged players of the final match and tournament— James Faulkner and Mitchell Starc, respectively. However, this did not mean that bowlers had pulled back the balance somewhat in a One-Day format weighted in favour of batsmen. In this World Cup, the effect of using a new ball from each end (so that it does not ever become more than 25 overs old), and allowing just four fielders outside the 30-metre circle became evident: the initiative was the batsman’s to grab or let pass. Great bowling, thus, stood out but as the exception that called attention to itself under playing conditions and rules meant to enable batmen alone. Surely, this World Cup of high innings totals and lopsided matches must invite a rethink on how the playing rules are, in fact, not letting the contest be as keen as it could be.

Australia have the temperament for big stakes, and their forthcoming tours of the Caribbean and England will show if they can once again be the all-conquering force they consolidated into with their 1999 Cup victory. They had come to that tournament (hosted mostly in England) after a most decisive handover in Test dominance, having beaten the great West Indies in the West Indies in 1995. Almost as a matter of habit, they’d go on to win everything in style, setting such benchmarks for scoring, fielding, planning, training and innovating that there came a time when their coach could talk of taking his players to ambidexterity and actually be taken half-seriously. You could argue they were already the best One-Day team in the 1996 World Cup, but the narrative then was so galvanisingly Sri Lanka’s that the spectacular final at Lahore could only have gone one way. The point is that Australia’s World Cup win was just another key coordinate of their champion-worthiness in every form of the game.

Australia are not that all-conquering yet. Their domination ended circa 2009, but there was no single successor and Australia did not exactly dip to outright secondary status. In his 2013 book Saving the Test, Mike Jakeman wrote of the flattening of the field in Tests: ‘In the past four years, the mantle of the best team in the world has been passed around between South Africa, India, and England, giving the sport a sense of competition that had been lacking the previous three decades.’ That sense of competition has remained, since. Jakeman’s point about the openness of the field was embedded in his larger argument that conditions in which Test cricket is played need to be reformed, and it will be interesting to see if Australia pull together to dominate all formats of cricket longer than India did in their World Cup victory year of 2011. Or whether home advantage, fickle individual form, misguided schedules, and a horses-for-courses separation of the three formats will continue to make overall dominance a difficult feat this decade.

India’s cricketers, meanwhile, will soon be caught in the giddiness of the IPL, and the international calendar may not be top-of-the-mind. But a big takeaway from every World Cup is the state of cricketing relations with Pakistan. Since 1996 at least, barring 2007 when both teams exited early without facing each other, the India- Pakistan match has been a standout fixture, invested with inordinately high emotion and oftentimes delusional ideas of the stakes being settled. This year too, the anticipation and hyper-charged interest in the India-Pakistan match call into attention the failure to normalise cricketing relations between the two. What does it say about India, the most powerful team in cricket today by virtue of the money their participation draws, that they cannot honour the sport’s greatest rivalry?

It is not just that India are denying spectators at home the pleasure of a full tour, either home or away (and Pakistan have worked out the modalities of ‘home’ venues once their cricket was offshored after the 2009 terror attack on the Sri Lankan team in Lahore); it is also not only that cricket’s cause has been advanced so vitally with the sporting—and sportingly watched—contests enabled when India and Pakistan have had proper relaxed tours rather than the acrimoniously cheered one- off encounters of ICC tournaments. It is, equally, that a country cannot presume to be—as India does with cricket—a sport’s most special participant if it does not have the organising capacity and large heart to host all competitors as a matter of routine.