Fashion shows are just that, not some great act of defiance, even in a country admittedly going to hell. 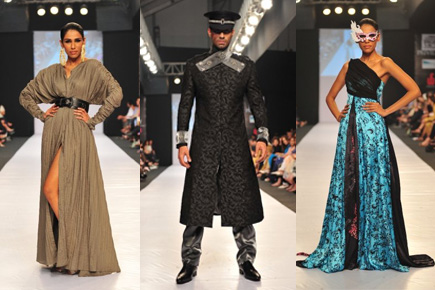 Fashion shows are just that, not some great act of defiance, even in a country admittedly going to hell.


Fashion shows are just that, not some great act of defiance, even in a country admittedly going to hell.

While Pakistan goes directly to hell, being a fashion designer remains one of the few professions by which one can still make an honest living. Even in these dark days, good designers—and several of Pakistan’s are exceptionally talented—are still in high demand. There is a school of thought that rather drearily considers aesthetic refinement a somewhat frivolous distraction and bangs on about fiddlers and Rome—“How can you think of a clutch bag at a time like this?” I’d agree, if the option, on an average evening, was popping out for a bite to eat and perhaps saving the country on the way home. The wedding season is an especially lucrative time. Brides-to-be order lavish, often outrageously expensive, joras because, after all, it’s still their special day; also because it’s considered bad taste to simply paste your bank statement to your forehead.

Whether or not “Who are you wearing?” is, in fact, the most fatuous question in the English language, the fashion industry generates jobs and does its bit to keep enterprise afloat, with textiles claiming a significant percentage of Pakistani exports. With this in mind, Karachi Fashion Week was held recently, showcasing the work of 32 Pakistani designers, the largest, but by no means only, event of its kind in the country. Occurring amid postponements and last minute changes of venue due to security concerns, for reasons that surely don’t require stating, it was eventually held at Karachi’s Marriott hotel, the Islamabad branch of which was brought crashing down last year, killing over 50 people. Every night for four nights, eight designers sent models down a blazing white runway in everything from shalwar kameez and gharara to skirts, jeans, shorts and, in one instance, something that looked suspiciously like my bedroom curtains, only worn with a belt, baring more or less the same amount of flesh one might expect to see at an opulent private party.

While the extent to which the exercise stimulated the economy remains to be seen, its effect on international media was instantaneous, with the event resulting in writers going head to head to claim the journalistic equivalent of the Golden Raspberry Award. It was with some bewilderment that one read in the papers the next day of the display of a bare back and some thigh hailed as “snubbing the Taliban”, regardless of the fact that it was done in a private, carefully contained environment filled with people who were not remotely like the Taliban, i.e. socialites, designers, buyers and the inevitable twerp in gigantic sunglasses in the dead of night. There was the de rigueur cliché of how daring it was to see skimpily dressed models in a society where women generally cover up, entirely omitting to mention that distinctions exist between those people who cover up and those who don’t, and fashion models fall quite clearly into the latter category. One scribe wrote of how heroic it was to show exposed navels while war is simultaneously waged in Waziristan, as if these two are somehow connected, as if, perhaps, the navels were being bared in Waziristan or that the war would be won should the military choose to spend its budget on tank-tops rather than tanks.

The executive at the helm of the event joined the dots in a rational manner, saying, “The more jobs you generate, the fewer suicide bombers there are likely to be,” but not everyone quoted from the fashion industry came off so well. One designer lamentably laid claim to being “a very brave woman” for displaying her clothes on a catwalk at a five-star hotel in a country where women have been known to be murdered, maimed, mutilated and on occasion buried alive, where girls’ schools are routinely attacked and where, even at the best of times, women’s rights, outside of a tiny income bracket, are limited at best. Another designer called it an act of defiance in the face of the Taliban, glossing over the fact that fashion shows do in fact take place with some regularity in Pakistan, and if one must intellectualise this, then it could more honestly be described as a display of affluence in the face of a nation torn apart by the gaping chasm between rich and poor. Why the foreign media can’t ask Pakistani designers questions about their work and why they, in turn, yield to the temptation, like Miss Universe, of providing a sound bite on world peace is beyond me.