The Buck Stops Here Too

After Open carried the transcripts of conversations between two iconic journalists and Niira Radia, a powerful PR person, the Indian media countered the story with strategic silence. A sacred code of Indian journalism had been broken. 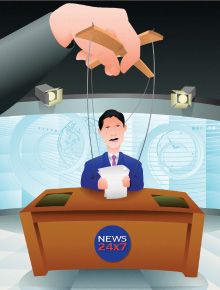 Even for a pen drive it was small. It was further diminished by the fact that it had arrived too easily. But then the files began to play on the computer. They were recordings of telephone conversations between Niira Radia, a public relations entrepreneur, who is evidently very good at what she does, and several influential people. When information of this nature is leaked to the media, there is always a motive. It is not clear what the motive was, or why the much larger mass of Radia recordings (that we know exist) are yet to be leaked. According to a person who has information in this matter, some of the people Radia spoke to had encrypted phones and the Israeli vendor who had sold the encryption was persuaded to cooperate with the Indian Government.

The previous issue of Open carried the transcripts of a fraction of the leaked recordings. The Indian media practically blacked out the story. Yet, by a modest estimate, the story reached over a million people. The transcripts showed, among other conversations, Radia selling a Mukesh Ambani spin to Vir Sanghvi, one of the most influential and admired columnists in the country, and television journalist Barkha Dutt offering to pass information to the Congress and transmit news back to Radia during the tumultuous days of May 2009 when the DMK was trying to extract key portfolios from the Congress.
When Open decided to run the story, we knew that we were breaking an unspoken code of Indian journalism, which is that we will protect our own. This is the last surviving code in the list of the unspoken rules of Indian journalism. The others have become obsolete. For instance, ‘never expose the sex lives of politicians’ was once the most sacred of the codes, but, as Narain Dutt Tiwari would affirm sorrowfully, the tenet is not so sacred anymore. We decided to break the last standing code because it did not make sense to us. We reached the decision to run the story not only through the infirmities of moral force but also, largely, through the clarity of artistic confidence—we wanted to do journalism our way. We knew there will be retribution, now or later. That, too, is journalistic process.

It was not the reason, though, why the decision to run the story filled some of us with unhappiness. The fall from grace of two major journalists did not give us much joy. The first time I met Vir Sanghvi, I was twenty-one years old. I had interviewed him for a magazine and at the end of the interview, I asked him, “How did I interview you?” It really mattered to me what he thought, though only later did I realise how stupid I might have sounded. (Also, strangely, I told a friend that evening my analysis of him. “That is a man you should never ever piss off.”) The first time I met Barkha Dutt, she was in a corridor outside a banquet hall, sitting alone on an object that I only remember as much lower than a chair. I went up to her and introduced myself. She said, “I have read you.” As I did not have any social skills then, I told her, “I have seen you on television.”

It is not surprising that both Barkha Dutt and Vir Sanghvi have responded to the Open story by claiming that their conversations were part of a ‘journalistic process’. But then journalistic process must result in journalism—if not immediately, at some point. Dutt is speaking to a corporate PR person who very obviously wants A Raja as Telecom Minister. And in their conversations, Dutt is clearly promising to use her access to pass on information to the Congress and give them greater clarity on what was happening inside the DMK. Why this is not journalistic process is clearly explained in our Political Editor Hartosh Singh Bal’s piece, ‘This is not journalism as we know it’. As he points out, we have a situation where a corporate PR person, representing two companies with interests in telecom, is mediating between the Congress and its ally when a battle is on for the telecom portfolio. This is the kind of story any journalist would love to report. How could Dutt miss that? Dutt’s situation reminds me of a magic realism novel that a friend had written, in which a lowly journalist is in search of a great story. Every day, when he comes home defeated, he speaks to his talking lizard. I find this novel absurd because any journalist would know that a talking lizard is the greatest story ever in the history of journalism.

In the days following the publication of the Open story, most of Indian media pretended that such a story was never reported. It was expected. Apart from the simple fact that most editors do not want to embarrass Vir Sanghvi and Barkha Dutt, there is also the more complex truth that almost all big media houses have something to hide. And the media does not want to be at war with itself. People who watch the media take on politicians every day feel deluded into believing that Indian journalism is fiercely free and independent. But the truth is that the media is able to take on the Government because the Government has become a minor advertiser. The new governments of our times are giant corporations and they very efficiently control all media. The most outrageous aspect of journalism is its very revenue model—advertisements.

In this whole media game, its consumers, we the people, are not fully excused. Journalism is expensive and if people really want good journalism, they should be willing to spend on content. Otherwise you get what you paid for.