The Best Sex of My Life

Why I won’t ignore my mental reel of sexual highlights 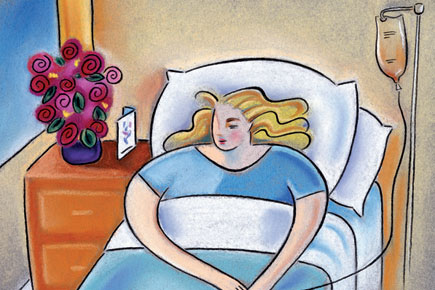 Why I won’t ignore my mental reel of sexual highlights


All of last week, I was confined to bed. And not in a way that makes you think about that week decades later in the shower—when the bed rocked, headboard shook and windows rattled, thanks to your wild howling at the moon. It wasn’t the kind of confinement that provides fodder for the mental reel of your sexual highlights, the kind that you replay your whole life, the kind that stands out from the 200 other times (yes, I’m optimistic) you had sex that year or every year after.

Yes, you inferred right—it’s been a while, but that’s not the point.

The point is the chain of events that unfolded as I was stuck in bed with stitches so painful in those parts of my body, they made me question the sanity of women who voluntarily reproduce. It was excruciating. And even though The Boyfriend assured me that I looked like a vision, albeit an unbathed one, in the mucous-coloured, standard-issue, backless hospital gown, all physical contact between us was limited to the holding of hands (after thoroughly scrubbing them with 99.9 per cent-germ killing disinfectant, of course).

Three days after my surgery, I was allowed visitors. I could see The Boyfriend needed a break from our uninterrupted anti-bacterial togetherness. An hour after he left, in walked the undisputed star of my reel of sexual highlights. The Alpheratz to my Andromeda. I was seeing him after six months, but this was the first time since he gambolled into my life three years ago that I was meeting him while I was in a committed monogamous relationship.

We chatted easily enough. I asked about his dogs, and he reciprocated with polite inconsequential questions that he’d forget within minutes of walking out of the door. I don’t blame him. We’re not friends, so I can’t call him a ‘fuck buddy’. And the Biblical knowledge we shared of each other’s body renders the ‘acquaintance’ tag useless, too. So the only way to describe him is—quite simply—as the most toe-curlingly spectacular lover I’ve ever had.

Half an hour later, he left. But already, I was imagining him naked. Yes, I’m going to girlfriend hell for those memory flashes.

Much later that night, as The Boyfriend slept, sprawled awkwardly on the companion’s cot in the hospital room, I thought about my guilt. It’s the biggest relationship cliché in the history of men and women—can you be friends with your ex? Magazines have made mini-fortunes peddling gyaan and complex psychological studies to women who can’t decide whether they want to accept or decline that life-altering friend request. Then there are those, like me, who are friends with almost all their exes. Barring one or two trainwrecks, I’ve had no problem re-establishing the pre-hookup state of my friendship with my exes. I suppose it’s easier to stay friends if you haven’t exchanged I-love-yous, sometimes several times a day. So yes, I believe that a girl can be ‘just friends’ with an ex. But can you ever have a Platonic relationship with the best sex of your life?

I’ve realised that almost all literature on relationships, love and ex-lovers presupposes that sex is better when you’re with someone you love. I can’t wholly disagree. If I was to list the three best lovers of my life, The Boyfriend would easily make the cut. But I also believe it’s possible to share pyrotechnic chemistry with an almost-stranger; that the best sex of your life can be utterly devoid of emotion. Like the one-night stand that turns addictive. Or the fling that feeds off your shared sexual frenzy. What then? What if the man/woman who rocks your world isn’t exactly an ex and hasn’t broken your heart? Can you ever look at such a lover and not feel the stirrings of what makes him/her so perfect for you in the sack?

When I think about my own relationship, I know that no matter how good the sex, I won’t step over the lines we’ve mutually decided and drawn. I respect him too much to cheapen what we share or inflict such deliberate hurt. When you feel that way about a person, shouldn’t that say enough about the relationship than feeling the need to pretend that sex with every other person in the past was just entry-level? Because let’s face it, for a lot of us, it was pretty damn great.