The Axis of Noble

With the Iran deal, it is the end of evil for Obama. Sadly though, the revolution is not dead in Iran yet 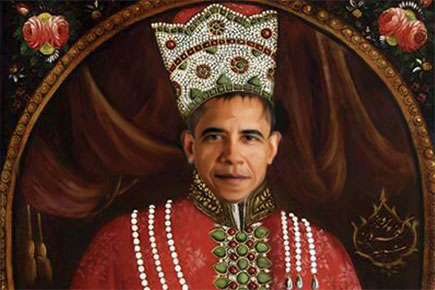 At his press conference on the nuclear deal with Iran in the White House on Wednesday, there were moments when President Barack Obama was that rare figure in politics who could still retain the flashes of poetry he was famous for during his campaign days even in these difficult times of governance. He was at his earnest best to explain, educate, and elucidate, for it was a deal first imagined by him as a candidate, conceived by him as president, and implemented by bringing other Western nations on board through his power of persuasion. At the press conference, he was such an original that at one point, when the White House correspondents were not asking the questions he thought they should be asking him about the historic deal, he answered his own questions. The tense moment, or a bit awkward one perhaps, came when the CBS correspondent, a bit disrespectfully, asked him how the president could be so content with this deal with a country that still has four Americans in its prisons. The president answered that, too, with utmost dignity.

Obama is doing all the talking on a deal with an enemy in whose official theology America is still the Great Shaitan, and whose supreme clerics continue to resemble the Imam in Salman Rushdie’s The Satanic Verses, raging against the lie that is history. This deal, Obama says, is not built on good faith or trust but on a verifiable foundation that gives Iran no room for cheating. This is a deal he wanted, and it fits in with his philosophy of engagement, the first outlines of which were elucidated while he was such a sensation on the stump circa 2008. He was then the candidate of reconciliation at home and abroad, and I remember an America in catharsis dancing to his poetry as I was there covering it for another magazine, demolishing with such evangelical flair the mythology of America First built by the neo-conservatives. He wanted to reach out to America’s enemies, and he had no time for such a ‘phoney’ war as Iraq. Just war? That was not Obama’s morality, then or now.

In power, as the Mario Cuomo principle in politics goes, poetry dissipates and prose takes over. Not literally, as far as Obama was concerned. When action failed, or when there was no action at all, he was still capable of partially regaining lost ground with a great speech. For a while. Forget America First, it was getting increasingly America Last, and Cicero was losing his magic words. Obama was not there, or he was there only at the periphery tentatively, when the world waited for leadership, Wilsonian or Reaganistic. Remember when the streets of Tehran erupted a few years ago, a kind of Persian Tiananmen Square, and the Iranian youth resorted to Twitter martyrdom? Or the rebelling monks of Burma or the romantics of Tahrir Square? Or just think of how the mad caliphs of the Islamic State have reached this far. Exhausted at home by his war with the Republicans, Obama on the global stage looked a leader drained out, without idealism or ideas. His election was historic. The president was on the verge of losing history.

And he owed something to the Nobel committee. The Nobel Prize for peace he received was an inaugural prize for not being George W. It was not a prize for what he had achieved (unless winning an election was Nobel-worthy), but one for what he should achieve. In power, he looked too bored and detached to be bothered about such historical responsibilities. It was as if history came to an end the day he won the election. There was nothing else to prove. The victory, the first, itself was the legacy. The rest was just the job. I think the epiphany occurred after the re-election —the call of legacy. So, predictably, he chose the most media-friendly enemy of them all: Castro’s Cuba. The restoration of the diplomatic relationship between America and Cuba marked the end of 50 years’ enmity that was pure magical realism. Suddenly, Obama was serious about legacy. He may not have got such monumental antagonists such as the Soviet empire, or a Berlin Wall to breach, but Cuba was good enough, and Florida Straits was historic enough to cross.

Cuba was harmless. Iran is an active player in the politics of Islam today, its influence stretching from Hamas and Hezbollah to the battlefields of Syria and Yemen, and its proxy war with the Great Shaitan has gone unabated. And there are still Ahmadinejads in Tehran who think that the Holocaust is a fiction and deny Israel the right to exist. If the classical imperialist built nations first by invading or colonising them, Obama, who detested the imperial powers of America, believes that you could civilise the enemy through engagement, not permanent punishment. The possibilities of a sanctions-free—and eventually nuclear-free— Iran are immense; they could lead to freedom, or so thinks Obama, who, history-hungry, has even ignored the fears of such permanent allies as Israel and Saudi Arabia.

It is the end of evil and Obama is the new axis of the noble. Sadly though, the revolution is not yet dead in Iran, and revolutions feed on the enemy, the Great Shaitan. That is a different history Obama has no time for.