The Advantage of the Older Man

It is not fully understood why long-distance runners in their 30s are superior to younger runners. 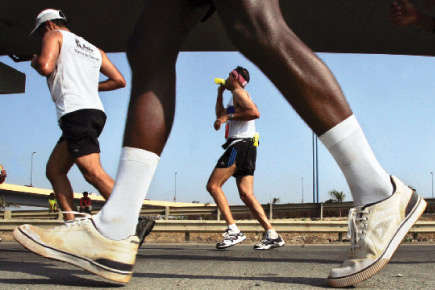 It is not fully understood why long-distance runners in their 30s are superior to younger runners.


When a man begins to run long distances, he discovers that he, too, has nipples. The effect of moisture and textile friction cause bruises in the region, even bleeding, and it is customary for a beginner in white vest to continue running on the roads unaware of the stains, misunderstanding the deep glances of people as an appreciation of his incandescent athletic personality.

Almost every man who loves running has at some point or the other privately asked his nipples why they exist when they are obviously of no use to him or his family. They are only a reminder that he began in the womb as a female, the default setting of life. The cure for the abrasion is a discreet application of Vaseline before a run, somehow a pornographic moment in the life of a man, and a ridiculous thing to do in the bathroom in the first light of day.

Most men who would take part in the two serious divisions of the Mumbai Marathon, the 42-km and the 21-km runs, are way past the stage where they are affected by their nipples, and they even know the right amount of sun block to use, which is a triumph of the proselytising love of their wives. There is a mystery that connects not only most of the male amateur runners of Mumbai, but also the best of the world’s elite runners—they are chiefly in their 30s, a sporting middle age.

In almost every mainstream sport, the younger man has a clear advantage over the older man. But in long distance running, men in their 20s are usually no match for the men in their 30s. Paul Tergat was 34 when he set the marathon world record in 2003. Haile Gebrselassie, who runs as if he is carrying books in the crook of his left arm, which was how he used to run the 10 km to his school when he was a boy, was 35 when he set the current world record in 2008, completing the race in under two hours and four minutes.

The dominance of the older male is evident among the amateur runners of Marine Drive too. As far I know or can see, the strongest runners here are all in their 30s. And the fellowship of running inevitably brings out the stories of their lives.

Bachelors talk of the terror of having to date the modern Indian woman in her 30s, who is always standing on the edge of a cliff and invoking something called the biological clock and, at the same time, dismissing her suitors as substandard or too short, or too poor or more commonly, as jerks. Some married men dream of having an affair and they say it in the same manner as they talk of buying new running shoes or a Garmin satellite watch. Others are jubilant to be somewhat stranded in family life with wives whom they love more than ever and new babies who inspire new gadgets. One man entertains his infant when he has to babysit by telling the kid, “Tumhare mama ko emancipation ho gaya.”

I once asked Andrew Leipus, the former physiotherapist of the Indian cricket team, to explain the dominance of the older man in long distance running. He said the phenomenon has not been fully explained, but he could offer a guess. “There are biomechanical, physiological and, more importantly, psychological differences between a man in his 30s and a boy in his 20s. An older man follows the rules more carefully and he has greater patience. Also, his body has grown attuned to all the stress that a marathon puts you through. His body responds in a different way.’’

Women in every age group, even the very young runners, appear to have the athletic maturity of older men. Also, they do not let adrenalin take over their bodies at the start of the run (a common mistake men make), and they run within their means until the very end.

This year, my plan is to follow a more feminine style of long distance running. I tell myself that this time, I will not charge like a warrior when the race begins, I will not exaggerate to myself the facts of my running talents and I will run with humility.

Men who run have a natural respect for women who run. They befriend them and are not unaffected by how they glow in the sweat, and the flat modesty of the sports bra.