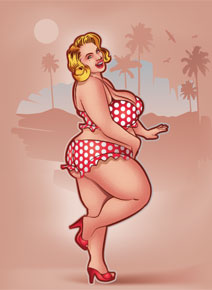 
Last week, I met my oldest crush. It started in the tuition classes I attended in my final year of school. He was better than me at Maths and it drove me crazy. It was instant love. We took our board exams, got into college and forgot about each other. Every two years, we make good on our Facebook promise to ‘catch up soon’.

After making PC for a quarter of an hour, he jumped to the point: “Set me up with someone.” A small voice in my head whispered, ‘He doesn’t know you’re not single. Why isn’t he hitting on you?’ I ignored it, and waited for him to continue. “[A mutual friend] told me what you do. You must know a lot of women. I really need to get some,” he pleaded. I wanted to take offence at the ‘what you do’ part, but I’m so used to it, feeling outraged would’ve taken more effort than I was willing to make. Besides, it’s true. I do have many fabulously intelligent single friends. Assuming he was looking for intelligence in a woman, of course. He assured me he was. So long as she wasn’t “fat or anything”. Instinctively, my hand went to my midriff. ‘This is why he’s not hitting on you,’ that inner voice taunted.

I’ve conditioned myself to shut that voice up the minute it starts sowing seeds of self-doubt in my head. It has already ruined my relationship with food forever. On most days, I’m incapable of enjoying a meal without worrying about what it might add to my body. I won’t say it, because the rules of feminism dictate that I be comfortable in my body, but the truth is, there are days when I’m really, really not.

Later that night, I wondered about this uncomfortable-in-my-body phenomenon. Logically speaking, being uncomfortable implies a sudden change in one’s environment. If you rammed a size eight foot into a size six shoe, it would be uncomfortable. Or if you took an anything-below-20-degrees-is-cold Mumbai girl and threw her into Delhi’s winter. Or if you got pregnant and had a baby growing inside you. But how can you be uncomfortable in a body that has been more or less the same size for most of your adult life? As a kid, ‘healthy child’ were my most hated words. That and the slight lifting of arms, as if the performer had abandoned a chicken dance midway. I longed for the index-finger-wave that everyone always used while describing my sister. It never happened. I continue to be one of the ‘healthy’ children.

A few days after my meeting with my old crush, I discussed my half-baked thoughts with a friend who has the healthiest body image I have ever known a person off the Oprah Winfrey show to possess. She is bigger than me, but also the healthiest (the actual healthful healthy, not the half-chicken-dance ‘healthy’) person I know. She knows that short of getting several key bones knocked off her Punjabi frame, she’s never going to be one of the cool kids, as defined by Abercrombie & Fitch. “The bigger battles, my love, are being fought all around you,” she tells me. “While trying to squeeze into benches that are attached to desks in school, while trying to manoeuvre your body in small spaces… The battle was fought and lost every time I tried to squeeze between tables without my hips nudging something. Every time I had to deal with unsolicited advice about diet and exercise from strangers. I’ll never forget that one euphoric time in Class VI when I could wear store-bought shorts to skating class like you guys, instead of waiting for the tailor to stitch mine. These are the moments that make you uncomfortable in your body.”

I’d never thought about it like that. Suddenly my index finger issues seemed petty in comparison. I’m reminded of all the years we spent zooming down Marine Drive before dawn, in preparation for skating competitions. She went on to become a national champion and I cheered her on from the bleachers. The girl I know can balance herself on wafer thin rollerblades; it’s difficult to imagine her feeling clumsy. But now that I look, I see reminders everywhere, ensuring I never forget that the spaces around me aren’t meant for bigger bodies, almost as if it’s wrong to need extra space. I’m hard-pressed to find a representation of a big body that is not intended to cause shame. I wish there were a way to unlearn the fat-phobia that has clawed its way into my psyche. I wish there were bigger desks in schools.