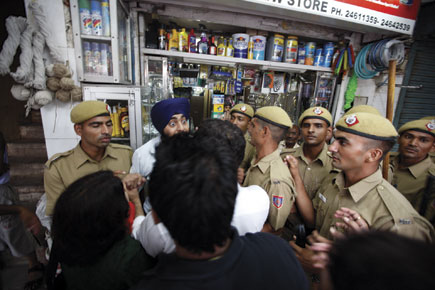 
There is a mathematical explanation for why backscratchers do well. It is an interpretation of the work of game theorist John Nash, the subject of the film, A Beautiful Mind, featuring Russell Crowe as Nash. A few years after the release of the film, Nash was brought to Bombay for reasons that are still not clear, to Nash especially. The banquet hall of The Oberoi in Bombay was filled with black suits and women with very small handbags, and there was an affluent odour in the air. They had, evidently, come to see Russell Crowe. But it was Nash who appeared, an endearing dazed old man. When he began to speak, nobody understood what he was talking about because it was a lecture that should have been given at the Tata Institute of Fundamental Research and not in the proximity of golden fried prawns. People first squirmed, then walked out, looking sheepish or busy on the phone. If Nash had been more comprehensible, his South Bombay audience would have deduced the most elegant description of how Bombay’s power of enterprise differs from Delhi’s fellowship of contacts.

In a commercial city, its most powerful players are usually locked in a zero-sum game where one person’s gain is another person’s loss. But in Delhi, its powerful are in what mathematicians call ‘a non-zero-sum game’, where every player’s best strategy also takes into account the best strategies of all the players. This is the type of human network corporate lobbyist Niira Radia was a part of. This is the reason why the national media headquartered in Delhi could not tell the story of how Radia lobbied for A Raja. The media was a part of her system. In such a game, all the players are in a mutually beneficial balance. It is called Nash Equilibrium.

A section of Delhi’s media has said that the Radia story has misrepresented a common journalistic practice. Journalists do speak to sources, and sources need not be good persons. When Barkha Dutt, one of the journalists in conversation with Radia, was asked why she did not report what Radia was doing, she said that she “did not see the story”. Radia was a source, like any other important source, and it did not strike Dutt that the source was the real story.

The Radia phenomenon has direct parallels with Outlook’s cricket-betting expose. When journalists Aniruddha Bahal and Krishna Prasad first revealed the unsettling story that there was a nexus between bookies and the cricket establishment, the most fascinating aspect of their account was that it was an old story, just that nobody wanted to tell it. In fact, Outlook’s 11 June 1997 cover story was headlined, India’s Worst Kept Secret. A few sports journalists were aware of what was going on, but they could not tell the story because some of them were financial beneficiaries of the process and others were compromised in more sophisticated ways. Also, obviously, there were great risks to a sports journalist’s career if he or she turned against the cricket establishment. It is not surprising that Bahal and Krishna Prasad were not sports journalists; they were outside the system.

Take a hypothetical situation. Imagine, some tapes had been leaked, of Ayaz Memon and a bookie in conversation. Imagine Memon being asked, “Why didn’t you expose the story?” Imagine Memon’s reply, “The bookie was a source. Based on my conversations with him, I filed a series of exclusive stories, like the composition of the national team for the next one-day series. I just didn’t see the larger story: why and how the hell did the bookie have all this information? I didn’t see it.” A more convincing defence of Memon would be, ‘Nash Equilibrium’.

The concentration of different streams of power in Delhi has lent the city a unique psychiatric condition. Intelligent bragging actually yields results here. If you have, show and tell—and remind. It works. When people here meet, they almost always discuss matters of national importance. They speak well, with interest and knowledge—the analysis they borrow from their favourite columnist. They have a stand, an ideological position, and they want to know yours. There are innumerable experts in every conceivable enterprise, and they do call themselves experts. There are countless consultants whose jobs cannot be fully understood even after an hour of conversation on the very matter. And, it seems, almost everyone in Delhi knows at least one minister, usually the education minister or health minister. Not many know the home minister and finance minister, for some reason. About five years ago, a flight attendant said that on Delhi flights, passenger complaints usually began with, “I know minister”. The situation has changed now, though.

Also, the car, somehow, is important in Delhi. When men wait with others on the porch of the Taj Mahal Hotel, there is an unspoken festive contest, and there are winners and losers. A friend whose Santro arrives has to explain why the Altis didn’t: “In Delhi, I like to use my small car; in Noida, I use my big car.”

The best way to live in Delhi is to scatter your life into an archipelago of carefully chosen private islands, like a good backseat, a beautiful home, a farm house, an inner circle of useful people, golf clubs, the best malls and bars and restaurants. You can live a whole good life here without ever walking down a road. There are probably thousands in Delhi who have not walked down a street for months. It is a city of long, narrow, desolate pavements.

The classes are clearly defined in Delhi and they know they are not equals, which is why its Metro has the enchantment of an alien machine running through it. Inside a Metro, this Delhi somehow collapses and it becomes indecipherable. A man in a well-cut jacket and good shoes sits beside an odorous peon. This could have never happened before the Metro came to Delhi. The discomfort of the good jacket is almost imperceptible, but it is there. Inside the Metro, it seems as if the world is still new, and people gape at unfamiliar moments. A couple in love standing interlocked; a self-conscious homosexual with restive eyes; a man giving away his seat to a woman, which is somehow an event, with the man then preoccupied for several seconds with the glory of his own goodness.

In intellectual circles, a favourite Delhi pastime is analysis. It is, no doubt, a highly entertaining and stimulating recreation, and all kinds of people indulge in it. For many, it is a form of employment in Delhi’s media. In a way, powerful opinions are formed in Delhi for people across the nation to consume and pilfer. The poor of India and their behaviour, and how they can be cured is, naturally, a significant part of elite political analysis. But there is a limit to how much the elite can truly understand those who are not like them. Refined men and women overanalysing semi-literates is a perpetual hazard of Indian political analysis. As a result, Delhi has consistently overrated the influence of Bal Thackeray in Maharashtra, lionising him in the media more than he deserves; Raj Thackeray (as he once hinted to me) was never so virulently against North Indian migrants until he saw how the hysteria in the national media over one misinterpreted statement was beginning to favour him politically; and Delhi has frequently misunderstood South Indian politics. It is not surprising that in the past we have heard such views in mainstream papers: poor Indian Muslims are different from West Asian Muslims, so we will never have homegrown Islamic terror; there will be no Hindu terror; what truly unites India is cricket, democracy and Bollywood.

Also, Bengalis have traditionally held inordinate power in the Delhi media. As a result, it has always been easier for Bengali cultural figures to become national icons than it has been for other regional artistes. If you have heard of Aparna Sen and Rituparno Ghosh (and wondered why), and encountered many times the opinion that Sourav Ganguly is the best captain India has ever produced, it is to some measure because of the gentle push of influential Bengalis in Delhi’s newsrooms.

Obviously, not everything about Delhi can be explained or its causes conveniently deduced. Like any other city, most of Delhi is the way it is for no particular reason. It seems, every family has at least one practising homeopath, there is an uncommon knowledge of gardening among middle-aged women, and more high heels are sold in Delhi than in Bombay. When a truck hits a car, the car owner, even if he is a short man, will manage to pluck the key off the truck expertly through the window. That is a ceremonial first step accomplished through much mention of the truck driver’s penis-anal system and his mother’s promiscuous nature. Then the truck driver is slapped several times—still through the window. Also, it seems the city is full of large mysterious houses where someone is murdered in one room as others sleep through it, or a cannibal eats his victims without drawing any attention to himself for a long time.

But if anybody has a problem with Delhi being the Indian capital, I must quote my colleague to bring a tremor of relief to your heart: “If not Delhi, it would have been Calcutta.”