There are some issues that must remain above partisan politics or populism, and this is one of them 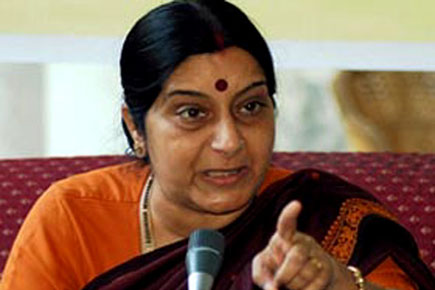 There are some issues that must remain above partisan politics or populism, and this is one of them


Every few years, Sushma Swaraj is metaphorically given to losing her head. And she manages to do spectacularly enough to erase the image she manages to build up assiduously in the intervening period through the work she does in Parliament. In 2004 she had wanted to give up her hair if Sonia Gandhi were to become Prime Minister, setting the stage for the drama of a renouncement that silenced the BJP for several years. Now she wants India to return with ten Pakistani heads for the one Indian soldier who was beheaded.

The need to term this sentiment ‘stupid’ is not merely born of a liberal revulsion at the barbarity of her views, it is to do with the wisdom of such a response by the Leader of the Opposition in the Lok Sabha, and a possible BJP contender for the post of Prime Minister. Surely, it must have not escaped the attention of her and her party that Pakistan is once again going through one of its periodic episodes of turmoil. The ruling party is besieged by a judicial order for the arrest of Pakistan’s prime minister, a cleric is serving as the focus for mounting public anger, and it is not conspiracy theorists who believe that the army is providing support both to the cleric and the judiciary. Keep in mind that the last such border adventure in Kargil by the Pakistan Army had served as a pretext for the army to take over from a civilian administration that had little idea of the army’s plans, and it would be possible to see what the Pakistan Army’s new adventure across the border is aimed at provoking.

Certainly, the act demands a response, but it must be a response that is carefully thought through and seen to its logical conclusion. Such a response must be formulated by the Government, and the Opposition should be on board. This requires one thing that the Congress has failed to do so far in many recent cases, directly engage with the Opposition. But at the same time, it requires the Opposition to understand that the Government needs to act in a manner that is meaningful.

A nation always on the verge of falling apart, while never quite managing to do so, poses enormous problems for its neighbours. Manmohan Singh has consistently upheld the need for restraint and a policy of engagement with the Pakistan establishment. Eight years down the line, while it is worth asking what this has amounted to (and the answer is not much), it is also worth keeping in mind that there are very few other options available. It would certainly make sense for India to insist that the perpetrators of this barbarity be arrest•ed, tried and punished, but to ask for this without having the ability to enforce the demand is pointless, as we have already seen in the case of the 26/11 Mumbai attacks’ planners. In the long term, it is worth asking whether we can build up the capacity to enforce this demand. This need not nece-ssarily only imply a military capacity, it could also mean that the engagement between the two countries reaches a stage where it serves neither establishment, and in Pakistan’s case the term ‘establishment’ must certainly include its army, to indulge in such acts.

One possible way ahead is then to look at strengthening commercial contact between the two countries, not the farce of people-to-people contact, or the idiocy of cricket or hockey players facing each other. In moments of crisis, the latter are easily dispensed with, and at a time when bodies are being mutilated, playing cricket or hockey is hardly the point. Once again the BJP has lost the plot. While Arun Jaitley, another would-be BJP PM, is busy pleading with Raj Thackeray to allow Pakistani players to play in a hockey league, the party’s hope for the future, Narendra Modi, has turned away a delegation from Karachi that had arrived to attend the Vibrant Gujarat Summit. Clearly, the BJP has no idea of what it is trying to do. It would make far more sense to deal with the businessmen and send away the hockey players.

Given this background, Sushma Swaraj’s statements are best seen as a continuation of the jostling for power within the party. She needs to assert her credentials in a party that rewards unthinking hawkishness. But there are some issues that must remain above partisan politics or populism. This is one of them. And if she desperately needs to shoot her mouth off, she can always check if Times Now is hiring.