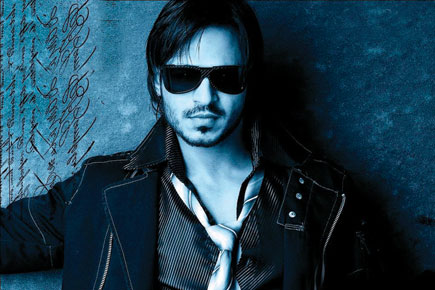 Vivek Oberoi is fast earning a reputation for being a party crasher. The actor recently turned up uninvited for a maata ki chowki organised by Sanjay and Manyata Dutt at their Bandra home, accompanying his Shootout At Lokhandwala director Apoorva Lakhia, who was invited. Eyewitnesses say the Dutts did a double take on seeing Vivek there and looked more embarrassed than the actor who’d shown up unwanted.

It’s no secret that Sanjay Dutt has kept Vivek at arm’s length since an incident a few years ago when the Company star shamelessly hit on Manyata at a party, unaware that she was with Dutt. Although Vivek famously apologised to the couple later, Dutt was in no mood to forgive and forget so easily.

When Vivek turned up for the premiere of Ram Gopal Varma’s Sarkar Raj in Delhi two years ago, the industry was shocked. The Bachchans are no friends of his, especially since Aishwarya dumped him for Abhishek. Although Vivek claimed he was there to support Varma, who’d invited him, the director himself revealed he had extended no invitation.

Vivek embarrassed himself similarly when he showed up at the cremation of Amitabh Bachchan’s mother, Teji Bachchan. The actor has since said he received an SMS from Abhishek asking him to be there, but close friends of AB Jr insist no such message was sent. “Who sends out a message inviting people to attend a cremation?”

Rolling out the Cash for Aamir

Yash Raj Films hasn’t had a bonafide success since the 2008 Shah Rukh Khan-starrer Rab Ne Bana Di Jodi. And their list of turkeys is getting longer every month.

The prolific film-producing studio that once took pride in getting even top stars to work for scale is rumouredly rolling out the carpet for Aamir Khan, who they want to cast in Dhoom 3. The desperate studio head is believed to have not only offered the star an attractive back-end share of the film’s profits, but also a fat upfront salary.

Notorious for binding stars and directors in three-film contracts for meagre salaries, the studio thrived in the 1990s and the early 2000s. But their formula has been failing lately. Younger actors like Imran Khan, Ranbir Kapoor and Vidya Balan have turned down offers by once maverick producer-director Aditya Chopra, forcing the famously star-dependent studio to launch newcomers every other year.

Aamir Khan, meanwhile, who took a year off acting after 3 Idiots, has announced he will star in a movie to release in 2011. Yash Raj Films wants Dhoom 3 to be that movie. But there’s a good chance Aamir may tilt in favour of Rajkumar Hirani’s project, a light entertainer that addresses the country’s obsession with religious customs and superstitions.

Aamir is expected to announce his decision by the year end, and you can bet his pay will be an important determining factor. Don’t forget, he’s believed to have taken home a cool Rs 35 crore for 3 Idiots!

News is trickling in from Berlin about frosty vibes between two beauty queens-turned-actresses who are shooting for a major Bollywood action-movie sequel. The ladies, who started their movie careers together, debuting in the same film opposite a popular khiladi star, haven’t been on friendly terms for some years now.

Both ladies had separately assured the producer there will be no awkwardness or tantrums while shooting together. And to be fair, there have been no catfights… yet. But unit hands reveal that the actresses barely exchange any words. The set has been divided into loyalists of either lady, and while the more successful one has found favour in the male superstar (with whom she’s already worked before), the other has a senior character actor, who plays the chief baddie, on her side.

Apparently the two actresses have avoided working together after their debut, but neither wanted to turn down this film opposite Bollywood’s biggest star. While one appeared in the first instalment of the franchise and was asked to reprise her role in the sequel, the other was approached for a smaller part.