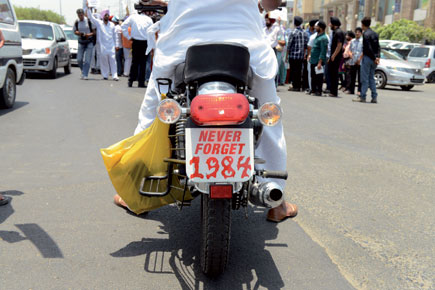 
When right-wing commentators invoke the 1984 killings of Sikhs to absolve Narendra Modi, their unsound logic is easily refuted. A man charged with culpability for murder can never take the plea that there have been other murders that have gone unpunished. I would think little more needs be said, yet several ‘secular’ commentators have joined issue with these right-wingers to make the claim that the Congress, despite 1984, is less of a danger than Narendra Modi.

The ‘despite’ is a problem. It takes a degree of armchair callousness to make light of the widows of Trilokpuri, as Mihir Sharma did with the easy claim that ‘1984’s victims aren’t living penniless in garbage dumps today as, around them, a state’s development is praised.’ Perhaps editorial judgment has been suspended at Business Standard. But Sharma was followed in quick succession by men whose opinion I usually value, such as Mukul Kesavan and Aakar Patel.

Patel wrote in The Hindustan Times: ‘The fact is that the Congress has made its peace with Sikhs. To see this we need to only go through the names of Punjab’s legislators. Of the 46 Congress MLAs, 33 are Sikh (on the other hand 10 of the BJP’s 12 MLAs are Hindu).’ The fact, though, is nothing of the sort. Let me cite a fact from Gujarat. Earlier this year, in the Salaya municipality in Jamnagar district of Saurashtra, where 90 per cent of the population is Muslim, the BJP put up 24 Muslims for the 27 seats at stake, and all of them were successful.

Going by Patel’s logic, it would seem that the Muslims of Salaya love the BJP. But I have reported from Gujarat often enough to know this is not the case. There is a Hindi phrase that sums up their plight: ‘Majboori ka naam Mahatma Gandhi’. If Patel had bothered to understand Punjab half as well as he understands Gujarat, he would know that in a state with a Sikh majority, the Congress and Akali Dal are the two alternative routes to power. If one is closed, the other is the only option. This has nothing to do with making one’s peace with a party, unless by making peace Patel implies exactly what the Hindi phrase suggests.

Kesavan is far more explicit in his admission of the extent and nature of the Congress’ culpability for 1984, but he ends his column in The Telegraph with a claim that goes beyond 2002 and 1984: ‘So the reason the dynastic Congress isn’t as dangerous as Modi’s BJP is dispiriting but straightforward: while the Congress is capable of communalism, it isn’t constituted by bigotry.’ This conclusion isn’t specific to Modi, it extends to almost any BJP administration. The problem is that Kesavan makes this claim while addressing the question of the 1984 killings. Murder or rape organised by a ‘secular’ party is no less serious than murder or rape at the behest of a communal ideology. You cannot privilege one party over another on this basis. Neither 2002 nor 1984 can ever be acceptable and either is enough to disqualify a party from a reasonable claim to power in this country.

The question, ‘What about 1984?’, is a trap. The case against Modi is not weakened by this counter, but the attempt to engage with it does highlight a secular failure on 1984 that persists. If you consider the difference between the pursuit of justice post-2002 and post-1984, Kesavan’s explicit claim is what accounts for the active involvement of civil rights activists in Gujarat and their apathy in practice over the 1984 killings. Many of the activists who have done outstanding work in Gujarat, such as Teesta Setalvad, see no problem in maintaining close links with the Congress. They see the BJP and Modi as ever present dangers that need to be combated, but they treat 1984 as an aberration that lies in the past.

Kesavan’s claim has been responsible for the underplaying of the massacre of 1984 and its ongoing consequences by most secular academics, journalists and activists. In a 2007 book The Clash Within published by Harvard University Press in the US and glowingly blurbed by none other than Amartya Sen, Martha C Nussbaum confronts the comparison thus: ‘The closest precedent to Gujarat… was the anti-Sikh riots in Delhi…’ She then goes on to make the claim that there were differences and that in the Delhi riots ‘rape and killing-by-incineration were not central elements of the violence’.

The central image of the 1984 killings is of Sikh men being burnt alive. Eyewitnesses tell of tyres tied around their necks and set on fire, others tell of a white powder that easily burst into flames. As for rape, Jyoti Grewal in her book Betrayed by the State, writes, ‘…I must respect their wishes which were explicit that I not repeat events, names and references. What I heard were the details of rapes, how family members were forced to rape their wives and daughters before the mob raped the women again; it was more than I could bear. When I asked from where they had learnt this information, they told me the names of various neighbours who had actually gone through these trying events. I have corroborated these stories but have chosen not to divulge them.’

Later in the book, she writes, ‘The issue of rape was buried… the community pressured them so much that the women just did not want to talk about rape.’ Women silenced once had been silenced again by one of the world’s leading feminists only to make a point about Gujarat. Consider the secular outrage we would have witnessed if a leading US conservative had written something so offensive about the Gujarat killings.

This selective amnesia is no aberration. Madhu Kishwar, always a maverick, is treated these days with well-deserved disdain by secularists for her recent claims that Modi acted promptly and effectively to quell the 2002 violence in Gujarat. Yet, the same people see no problem in claiming Mani Shankar Aiyar, another maverick, as their own even though he has spent close to three decades making similar claims about Rajiv Gandhi’s response to the 1984 violence in Delhi.

When both Kesavan and Patel claim it is unlikely that the BJP will ever put up a Muslim as Prime Minister, and claim this as a virtue of the Congress, they forget that Manmohan Singh’s very presence has been the guise under which the Congress has wished away the 1984 killings. They forget that in 1999 when Manmohan Singh contested a Lok Sabha election in South Delhi, he exonerated his party by stating, “Just as the Congress party did not plan the riots, but certain individuals belonging to the party have been accused of them, I have come to know that certain people belonging to the RSS were also named in some FIRs.”

This was a very convenient partial truth, a cover-up. And in a larger sense, Manmohan Singh remains the cover-up for the Congress to keep rewarding ministers such as Kamal Nath. The silence that surrounds Kamal Nath in the secular media is illustrative. The claim goes there is no case against him for the 1984 killings. A truth suppressed by circumventing the judicial process partly because the media did not do its job then becomes the basis for the media to avoid telling the truth about a man.

What is true of Kamal Nath is also true of a number of Sikh faces the Congress projects in Delhi. In the run-up to the Delhi Assembly polls, government advertisements almost always show Shiela Dixit accompanied by Arvinder Singh ‘Lovely’, the state minister for education as well as gurdwara elections and gurdwara administration. This is a man who owes his entry and rise in the party to his father Balwinder Singh, who in 1986 submitted an affidavit to the Misra Commission in favour of HKL Bhagat, one of 1984’s main accused. In 1989, Balwinder Singh organised a function where Bhagat was accorded a saropa, a Sikh ceremonial honour.