India’s cricket prodigies today are luckier than their predecessors, but who will stay the distance like Tendulkar? 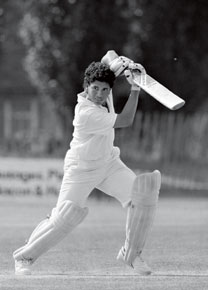 Is Pranav Dhanawade, the 15-year-old who scored a world record 1,009 in 323 deliveries in an inter-school match in Mumbai, a prodigy? He perhaps is, but only time will tell for sure, for a prodigy is by definition a person, especially a child or young person, of extraordinary talent or ability, and Dhanawade will have to compete on equal terms with adult cricketers to prove that he is indeed one. His was no mean feat: a thousand runs in any class of cricket is a mind-boggling achievement, even if Dhanawade made his record score against a weak opposition of younger kids on a small ground. He scored his runs at a strike rate of over three runs per ball, while leaving the previous highest individual score in any class of cricket far behind. That was an unbeaten 628, made in 1899 by AEJ Collins in England.

Prodigies in any field of activity may go on to achieve success in their adult years or they may fall by the wayside once they grow up, based on whether they are blessed by the many factors that go into the making of true achievers, luck or ‘grace’ not the least of them. In cricket, with particular reference to Indian cricket, only one—Sachin Tendulkar—has so far stayed the distance after a brilliant debut at a precocious age, though some others like BS Chandrasekhar, S Venkataraghavan and Bishan Singh Bedi, bowlers all, enjoyed successful, long-lasting careers after making their Test debut before they turned 20.

Vinod Kambli, Tendulkar’s partner in a 664-run partnership for Shardashram Vidya Mandir against St Xavier’s in a Harris Shield match in 1988, was a prodigious talent too. He made a grand entry into Test cricket with two double hundreds against England in his debut season, and an astounding batting average of 54.2, before the West Indies fast bowler Courtney Walsh halted his career after just 17 Tests in a span of less than two years, by exposing a fatal weakness against short- pitched bowling. (Kambli made a valiant comeback in one-day internationals before a freak injury cruelly ended that too.)

Precocious cricketing talent perhaps abounds in India and might always have existed unbeknown to the world at large, because even gifted youngsters grow into international cricket at the adult level in a systematic progression, if at all, and we seldom get to learn of their extraordinary talent when they don’t make the grade.

Sachin Tendulkar was one glorious exception, but if his inspired selection to the Indian team—an intuitive gamble by chairman of national selectors Raj Singh Dungarpur—at the age of 15 had bombed, subsequent committees could easily have become altogether wary of experimenting with youth. Roughly three decades before Tendulkar arrived on the scene, India blooded two 17-year-old opening batsmen: AK Sengupta, who had made a hundred in a tour game against the touring West Indies before being beaten black and blue in the 1959 Madras Test— and Vijay Mehra who made a quiet exit after a short stint at the highest level. Leg spinner Laxman Sivaramakrishnan promised much in a brief fling, mesmerising the English Test team by taking 19 wickets in the first two Tests of a series, and Australian crowds with his magical exploits in the Benson & Hedges World Championship of Cricket in the mid-1980s, but faded away very soon afterwards. He, too made his debut at age 17.

Among the prodigies who did not make it to international cricket, Saad Bin Jung of Hyderabad, a nephew of former India captain Tiger Pataudi, made waves in the 1970s, scoring a classy hundred for South Zone against West Indies when barely 16, and another against Tamil Nadu not long afterwards, the first against torrid pace and the second negotiating quality spin on a diabolical turning track. To the discerning cricket watcher, Saad seemed destined for greater honours, but he did not last long in the first class circuit, a clear case of lack of foresight amidst selectors and administrators, and perhaps diminishing focus in the player himself.

Neighbouring Pakistan has always managed to unearth young talent. The first teenage cricket sensation of that country was Mushtaq Mohammad, a younger brother of the great opener Hanif Mohammad, who was still short of his sixteenth birthday when he made his Test debut, and went on to become the youngest century maker in the world—though Western observers tend to view Pakistani age claims with some scepticism. Decades later, Hasan Raza’s claim that he was only 14 when bursting on to the Test scene, was at first met with disbelief and later rejected as not true. While Mushtaq had a long and distinguished career as middle order batsman, leg spinner and captain in both English county and Test cricket, Raza has had to be content with a relatively poor record.

Pakistan’s charismatic captain Imran Khan who enjoyed carte blanche in matters of selection was an astute judge of talent and often picked raw youngsters before they had even played first class cricket. Pacemen Wasim Akram and Waqar Younis were the most outstanding examples of Imran’s eye for youthful brilliance.

In recent years, Mumbai has been a regular supplier of schoolboy cricketers of unusual merit. Before Dhanawade, 14-year-old Prithvi Shaw hit the headlines in November 2013, when he scored 546 off 330 balls for Rizvi Springfield in a Harris Shield match against St Francis D’Assisi at Azad Maidan. Still an under-16 player for Mumbai, Shaw is often compared to Tendulkar, and has benefited from the talent spotting efforts of former Mumbai cricketer Sahil Kukreja and Indian spinner Nilesh Kulkarni, which have enabled him to play cricket in England, inclusive of a stint with Gloucestershire’s second XI. The very talented batsman Sarfaraz Khan of Mumbai became the youngest IPL signing in 2015 at the age of 17, but is yet to establish himself in the longer forms of cricket. Unable to cement his place in the competitive Mumbai team in the Ranji Trophy, he has moved to Uttar Pradesh. For all their exceptional showing at the level of their age group, none of these boys has yet been exposed consistently to first class cricket at the adult level, where the true test of ‘prodigy-hood’ lies.

Through the centuries, prodigies have amazed audiences in fields like music and mathematics. Here again, the work of the child prodigy attracts the attention of experts and lay people alike only when it is as complete and mature as that of adult practitioners. If in Western music, for instance, great artists from Amadeus Mozart to Yehudi Menuhin not only gave early evidence of phenomenal gifts but went on to become unquestioned leaders in their fields, Indian artists like Hindustani vocalists DV Paluskar and Kumar Gandharva, and south Indian instrumentalists TR Mahalingam and Mandolin Shrinivas started enthralling listeners as pre-teen whizz-kids.

While a prodigy is said to show practically untrained capability in one or more fields, this may not be strictly true of a cricket prodigy today, when no child can be said to be untrained, with the ubiquitous impact of television that brings the game to the drawing room, and with coaching starting very early. Yet, even among children systematically schooled in the game, the exceptional ones only come to light when spotted by the observant parent or coach, and given special attention.

Innate felicity in any sport or art can also be a matter of inheriting the right genes. In India, reincarnation claims are not uncommon, especially in the field of music, whenever a young star arrives on the scene, though cricket has been spared such speculation by and large. A nurturing environment and caring parents, coaches and mentors are, however, essential for the proper development of exceptional talent. Unfortunately, being gifted, and being recognised and feted, bring with them the burden of expectation and ambition, even recklessness and overconfidence. Flute maestro TR Mahalingam, for example, led a turbulent life, his fondness for liquor and his eccentric quirks making him an unpredictable genius all his life, while Mandolin U Shrinivas steadily built on his childhood promise through sheer hard work to become a brilliant, but dependable star in his brief sojourn on earth. Both were world class artists, but Shrinivas was loved by lay listeners and connoisseurs alike, and Mali’s fans adored him despite his faults. The boy Mali was said to have been forced to play his music without diversion or break all through childhood and youth and most of his idiosyncrasies and reluctance to perform were attributed to the resultant pressure. Though overexposed, Shrinivas, with a more stable family environment, somehow managed on the other hand to retain a sense of balance and poise throughout his career, till his premature death in 2014.

The similarity to Sachin Tendulkar’s and Vinod Kambli’s lives is fairly obvious. Tendulkar’s middle class values and unrelenting work ethic stood him in excellent stead, while Kambli’s proclivity to embrace life in the fast lane and his fragile temperament made him lose his way, and life too tended to spring nasty surprises on him. He broke down publicly on occasion, hurt by what he saw as his childhood friend’s unconcern for him, and even suffered a heart attack.

Another prominent child prodigy in Carnatic music, N Ravikiran, who was first identified in the 1970s, has gone on to become an outstanding practitioner of the art of playing the gottuvadyam, a fretless string instrument he renamed chitravina. Ravikiran, who stunned audiences as a two-year-old by recognising hundreds of ragas, is now an accomplished artist, composer and researcher in his forties. A grandson of Narayana Iyengar, a great gottuvadyam artist, Ravikiran was trained systematically by his father N Narasimhan, also an exponent of the instrument, who believes that every child is a musical prodigy, provided she is given the right atmosphere and training. Practising his methods first with Ravikiran, Narasimhan went on to prove his theory by repeating them with three other children in the family. All of them are more than competent performing musicians, but Ravikiran stands tall, the only one of them touched by genius.

Today, like Ravikiran and other young musicians, India’s cricket prodigies too are luckier than their predecessors. Most of them are spotted when very young. Their parents, schools, coaches and mentors, not to mention the scholarships and contracts offered by leading academies that make it financially viable to pursue the sport, actively encourage them and impart them the right values. Prithvi Shaw, Sarfaraz Khan and Pranav Dhanawade can focus on their game without any worries. All they need to do is to steer clear of the twin impostors of complacency and bad habits, cricketing or otherwise.