The pros and cons of paying people to use public toilets 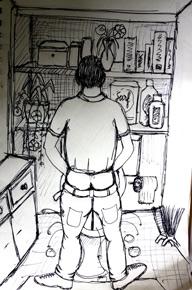 Ever wondered what happened to all those film stars and businessmen who came onto the streets with a broom in hand and then nominated more people to continue the chain? Recollect that it started with Prime Minister Narendra Modi nominating nine people. If each of these nine nominated five, it would become 45 broom wielders, and we did see them on TV and Twitter. And then five nominations each by all of them would make it 225, and so on. If things went to plan in this geometric expansion, we should still see people with brooms everywhere. But we don’t. In fact, you see no one.

The only people who will be surprised at this are the ones who took their school lessons about the altruism of human beings seriously. Sweeping streets is hard work but even, like Hema Malini, walking on a street with a broom to show that you could be potentially sweeping requires effort. And there is really no gain because the next day the street would be exactly as it was the day before. If there was a guarantee that every man and woman would participate, then every man and woman would take it seriously, but everyone knows a pipe dream when they see one. Why did those initial film stars and businessmen do it? Because they had incentive. They were publicly named by prime ministers, ministers, friends and family whose recognition mattered to them. With a broom in hand, they looked good to fans, employees and Modi. That was incentive. But if it is your neighbour or office colleague nominating you, then you usually don’t really care and it gets treated with cynicism or contempt. The chain gets broken under ordinary conditions.

We are a schizophrenic culture about hygiene—personally fastidious but with no public involvement. Ahmedabad Municipal Corporation might, however, just come out with a guaranteed solution to the problem. It has announced that it would pay one rupee to those who use public toilets. They start with 67 public toilets which will increase to 300. It is a very clever idea, turning the old model—that people should pay to use toilets—on its head. Human beings respond to incentive and money is a good one.

Will it be successful? It would depend. One rupee is not a lot of money, but then the man defecating in the open on the street near the toilet does not really come under an income tax bracket. The risk would be in his going to the toilet too often. If he goes 10 times, then he makes 10 rupees. The bureaucracy might anticipate this and make some silly rule like a limit of three, but if you create a rule there will be checks needed to enforce it and then there will be ways around it. You could have professional toilet-goers like professional beggars. Queues could get longer and those with a real need will feel shortchanged. They would then return to the open streets.

You would therefore need an abundance of toilets if this plan has to work in the long term. Otherwise appointments might be needed. But still, no matter what, someone is making some money in a somewhat strange fashion. And that is good because he needs it. Otherwise he wouldn’t do it.