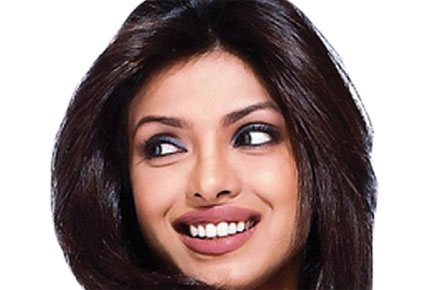 
With Priyanka Chopra having announced last week that she’s signed a recording deal with an international music label, the gossip surrounding her frequent visits to Los Angeles this year is likely to die a natural death. Her rivals have been hinting that the actress may have been secretly visiting a
cosmetologist on these trips, but Priyanka revealed that she has been in meetings with record label executives for the better part of a year now, planning the album and working out a suitable contract.

Just one week before showing up in Toronto for the IIFA Awards in June, Priyanka was in Los Angeles, from where she regularly tweeted photographs and updates. At least one starlet had remarked in Toronto that Priyanka was “looking fuller” lately. Given that the truth is out now, perhaps her chest was only swelling with pride!

Bitchy star wives have been sniggering about an outrageous close-up of Sridevi on the cover of a women’s magazine that’s just hit the stands. The picture, they insist, makes the Chandni star seem ‘alien-like’, with her nose and mouth looking positively distorted, not to mention a giant forehead. Over lazy weekend brunches, some ladies have been placing bets over whether it’s a PhotoShop job gone wrong, or the result of a cosmetologist nodding off on duty.

The actress, incidentally, is shooting her comeback film English Vinglish opposite Amitabh Bachchan currently. Her husband, Boney Kapoor has also just announced that he’s convinced the missus to star in a Mr India sequel opposite Anil Kapoor that will also feature Boney’s son Arjun Kapoor.

A friend of the actress reveals that while Sridevi has dived back into acting without much anxiety, she’s particularly nervous about participating in promotional interviews and facing the media after all these years. The famously reclusive actress has never enjoyed talking about herself or her work, but apparently understands that there is no escaping that nowadays.

Invited to grace a prestigious charity event organised by the non-profit arm of a major corporate, this former female superstar made a list of unreasonable  demands that left her hosts speechless. Since there was to be no financial remuneration to be paid to her in exchange for showing up at the event in the capital, the actress’ manager seemed to have decided that they’d take full advantage of the hospitality instead.

Six air tickets were demanded in all; three business class tickets for the actress, her manager and his daughter, three for her personal attendant, a hair-dresser and a make-up man. The hosts were asked to make a BMW available to the actress for the duration of her stay, and the manager also conveyed that the actress had flat-out refused to stay at the five-star property where rooms had been booked for her entourage and herself. He revealed that the actress was insisting on being put up at a nearby seven-star property where the room tariff was roughly thrice that of the other hotel. Despite repeated requests from the hosts urging the actress to “adjust” to their original hotel arrangements—since they’d struck a good deal with the five-star hotel, where the event itself was to be held—the actress’ representatives wouldn’t budge.

The demands didn’t end there. The hosts were asked to pay for an outfit by a top Delhi designer the actress had decided she wanted to wear at the event. On enquiring with the designer, the hosts were informed that the outfit cost Rs 2.5 lakh. In an email exchange with the hosts, her manager had also stated that ‘all other expenses’ during her stay would be borne by the hosts, sending the poor fellows into a complete tizzy just thinking about the bills she was likely to run up by way of room service, laundry and salon expenses.

Harrowed by her prima donna demands—and in all fairness, unsure about how many of these unreasonable requests were being made at her own behest—the hosts wondered if it might have been better to have offered her a Rs 10 lakh all-inclusive compensation deal instead. Too late for that, they figured. What’s shocking here is that the actress doesn’t have a single film on her hands currently, and is said to be shopping around desperately for a comeback vehicle.  You’d think a little humility would help.