Pass That Bill, Instead

Our politicians prefer rhetoric over legislation. A bill on sexual assault left pending in Parliament is a case in point 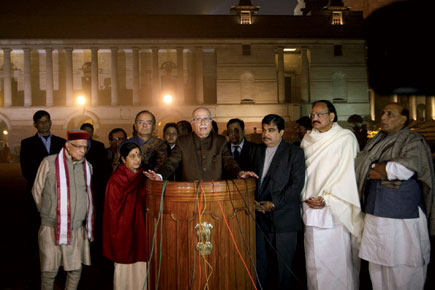 Our politicians prefer rhetoric over legislation. A bill on sexual assault left pending in Parliament is a case in point


This is yet another chapter in the long saga of how politicians try to take people for a ride all the time. This time in the national spotlight is the dastardly gangrape and attempted murder aboard a moving bus in New Delhi on the night of 16 December, and the country’s problems in dealing with crimes against women. But the chapter begins in the Lower House of Parliament on an afternoon several days before the abhorrent crime took place and spurred the public discourse that has moved in various directions since.

On 4 December, seven minutes after Question Hour had ended in the Lok Sabha, Union Home Minister Sushil Kumar Shinde got up to introduce an important bill. It was the Criminal Law (Amendment) Bill, 2012, which among other things seeks to make penalties for crimes against women more stringent and replace ‘rape’—defined narrowly right now as sexual intercourse without consent—with ‘sexual assault’ that would apply to a broad set of such violations.

The Bill was introduced in the House that day with a majority of its members giving it their assent, but within minutes, their focus of deliberations was back on FDI-in-retail once again.

First, a detailed look at the Bill, and then, a little about the attitude of politicians. If carried through, this piece of legislation will amend three crucial Acts that govern criminal law in the country: the Indian Penal Code (IPC) that dates back to 1860, the Code of Criminal Procedures (CrPC) of 1973, and the Indian Evidence Act, 1872. The Bill introduces three new offences under the IPC. While the first relates to public servants and is not relevant to sexual crimes, the other two are specific sections that make the law more stringent.

The third offence, pertinent to the present case, is ‘sexual assault’—which will replace ‘rape’. In effect, it widens the offence of rape to include violations that may escape the existing definition on technical grounds. This was long overdue.

For the offence of rape, the IPC’s current provisions have a punishment of a minimum of seven years and maximum of life imprisonment and a fine. It allows the court to impose a lighter sentence. The Bill retains the punishment specified, but takes away the power of the court to lighten the sentence. Significantly, it increases the age of sexual consent from 16 to 18 years, which means if the above acts are committed with a person who is not legally an adult, there would be penal action with or without consent.

Under the IPC, sexual intercourse by a man with his wife who is more than 12 years old but below 15 is punishable with two years’ imprisonment. For sexual assault by a husband on his wife below 16 years of age, the Bill pending in Parliament provides a punishment of a minimum of seven years and maximum of life imprisonment. The IPC offers an exception to the offence of raping one’s wife—sexual intercourse without the consent of the wife if she is above 15 years of age. The Bill raises this age limit to 16 years.

Presently, under the IPC, rape by a husband of his wife during judicial separation is punishable with maximum two years’ imprisonment and a fine. The offence is non-cognisable and bailable. The Bill provides a punishment of upto seven years and a fine for sexual assault during judicial separation. It also changes the nature of the offence to a cognisable and non-bailable one.

The IPC provides a punishment of up to five years for a public servant who uses his official position to induce consent or seduce a woman in his custody and engages in sexual intercourse with her. The Bill increases the punishment to a minimum of five and maximum of 10 years. The Bill also seeks to amend the Evidence Act to provide that in case it is proven that there was sexual intercourse between the accused and the victim in the accused’s custody, it would be presumed that it was without consent. This is another significant development in the law on sexual crimes against women. It also states that evidence of the victim or of his or her previous sexual experience shall not be relevant to the issue or quality of consent.

The Bill also increases the punishment for use of criminal force to outrage the modesty of a woman from up to two years with a fine, to up to five years with a fine. The Bill amends the CrPC, making it mandatory for a woman police officer to record evidence if it is being given by a woman who is a victim of sexual assault or an assault to outrage her modesty. Under the current CrPC, all evidence in the course of a trial must be taken in the presence of the accused. The Bill seeks to create an exception for evidence of a victim of sexual assault who is below 18 years of age. It allows the court to take appropriate measures to ensure that the victim is not confronted with the accused.

A lot of thinking has gone into the amendment Bill in its proposed form, and it is the outcome of several years of deliberation by experts. It largely fulfils the ongoing public demand for more stringent punishment for such crimes—barring death penalty for rape, which is a question for a much larger debate. The Bill takes into account recommendations of the Law Commission of India in its One Hundred Seventy Second report on ‘Review of Rape Laws’ as well as those of the National Commission for Women on stringent punishment for the offence of rape. A High Power Committee was constituted of representatives of the Ministry of Women and Child Development, Ministry of Law and Justice, National Commission for Women, Law Commission of India and the Ministry of Home Affairs to examine the matter of considering suggestions from various quarters on the subject. Then the Committee submitted its report along with the draft Criminal Law (Amendment) Bill, 2011, and recommended it to the Government for enactment.

After examining the Bill, it took the Government more than a year to place the proposed version in Parliament this Winter Session that ended in late December. Even after it was introduced, neither the Government nor opposition seemed to show any urgency in getting it passed—or discussing it. The Bill was never listed for consideration and passage in the Winter Session. But circumstances changed after the 16 December gangrape and murderous assault on a paramedic and her friend. On 18 December, both Houses of Parliament witnessed disruptions and uproars over the gangrape. Yet, neither the treasury nor opposition benches got down to discussing the Bill, despite the build-up.

For each session, the Government prioritises a set of bills that it wants passed and works on them. The Business Advisory Committee, which has MPs from most parties, decides on the list of bills for each house on a weekly basis. Former Secretary General of the Rajya Sabha Yogendra Narain points out: “The BAC is a mere formality for making the functioning of Parliament smoother and better organised. If the Government wants to give attention to a particular bill, it can do so. Even the opposition can demand that a bill be discussed or brought forward by speaking to the Chair. But, it was clear this time that the Government was more interested in the Banking Bill and other legislation.”

Statistics compiled by PRS Legislative Research show that the Lok Sabha passed four bills in 2012, spending less than five minutes on each. In fact, 35 per cent of all bills in the Lok Sabha have been passed after less than an hour of discussion, while the Upper House has passed 71 per cent of the bills this year after having spent under two hours on discussing each. MR Madhavan, who heads research at PRS, says it is desirable that a bill like the Criminal Law Amendment Bill go through a select committee and detailed discussions. But he says that there have been instances of the Government or Parliament pushing bills through in a matter of minutes.

It was only after the end of the Winter Session that Leader of the Opposition in the Lok Sabha Sushma Swaraj began demanding a special session on laws related to sexual crimes against women. Parliament functioned for four days after the 16 December gangrape, and the issue of women’s safety had speeches made by politicians in both Houses. Once their rhetoric spilt onto the streets of Delhi, they reacted to public protests depending on their political affiliations. Yet, inside Parliament, as legislators, they seem to have ignored the Bill that addresses exactly that issue. They have put it off for 2013, or perhaps even later.