Our Man goes to America 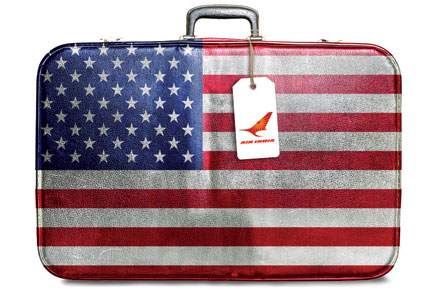 So Narendra Modi is all set to visit the United States which, for a decade, refused him a visa. This was a bit rich coming from a country that revels in being the ‘land of the free’ where justice is fair. Was Modi ever convicted? No. Was he ever indicted by any court in India? No. And yet the United States refused him a visa: so much for the principles of democracy and justice.

The United States is a recent civilisation. Recent enough to get excited about minor time milestones like a hundred years and so on. It is also a country that has been built by migrants who show exemplary zeal in embracing Americanism the moment they get citizenship. Neither an Indian nor an Englishman will be as loud of his nationalism as the average American is. But that is because we don’t need our nationality to define us. Our civilisation does the job. With America it is different. It needs the trappings of nationalism to keep the flock together. It needs every global pulpit to express its outrage over the violation of human rights and yet it was only recently that Martin Luther King exhorted a nation to sit at the table of brotherhood. America is also about hope, and nations that come together on this platform often confuse hope with greed. America has always been proud of its capitalism and free market sprit, and yet even to this day several industries are unfairly skewed to favour American industry—agriculture being one such. I was amused to see the spat between Apple and Samsung over intellectual property rights, and yet for years the average American has been lied to about the origins of Basmati rice, which ostensibly comes from California and Texas: a far stretch from the Indo-Gangetic plains. Then there is the issue of human rights itself and the simmering discontent that so often rears its ugly head as it did not so long ago in St Louis.

Hypocrisy has been an enduring birthmark of the United States of America. It has never been ‘what’s good for the world maybe also good for the United States’ but instead ‘what’s good for America must be good for the world’. Hypocrisy is a virtue easy to adopt when commerce drives the agenda, as it sadly does in today’s times. So one can’t blame the US for taking this hegemony to rare heights; but while the United States is a great preacher, it is a poor listener. It displays an aversion to the confession box. Equally, the dysfunctionality of basic society in America cannot be discounted. A melting pot of so many cultures is bound to have its own friction and we see it in the manner in which politics is run in the US. Then there is the overhang of religion and perhaps excessive intolerance. The contempt which innocent Sikhs suffered post 9/11 also points to another facet of America: there is no sense of either global history or empathy for cultures other than their own, which is not something any superpower should be proud of. The great moralist that the United States wishes to be often pales in front of other frustrated global leaders such as Vladimir Putin who flex their muscles.

Might is often hated by those who don’t possess it. They invent authority where none exists and want the mighty to take a stand that may be unpalatable for that nation but is seen as the right thing to do. America had no proof of weapons of mass destruction in Iraq, and yet no official of any American administration will ever be tried for several thousand Iraqis who lost their lives for no fault of theirs. Contrast that to the proceedings against war criminals at The Hague and you will spot an enduring paradox.

There are several things wrong with America, as I am sure there are with India and other nations too. But then there are several things about the US which deserve applause. America is no longer a society that denies people an opportunity because of their colour and race. In India, sending high-profile people to prison has been a recent phenomenon, but what I love about America is that by and large the justice system is fair and will punish you for a crime no matter who you are. You can never imagine an Indian Prime Minister being interrogated by a Special Prosecutor as Bill Clinton was by Ken Starr. If Rajat Gupta had been in India, I doubt if he’d have gone to jail for insider trading.

In a perverse way, greed has helped shape and define America’s global success as an economic powerhouse. The rich in America are feted, but then they also give back in great measure. Unlike our country. I have, over the years, been a passionate believer in what America has done for liberalism, through free speech and an outstanding higher education system which has the ability to draw the best and brightest from across the world. And then by creating an environment where they bloom. There are more migrant Americans who have won the Nobel rather than homegrown Americans. If there is one thing that the United States of today can guarantee every man, woman and child, it is equal opportunity. You can be miserably poor, but you will never go without an education. Even though successive American Presidents have fumbled with universal healthcare, no one who is ill or has met with an accident will have hospital doors close on him. The basis of a just society is making it convenient for people to do well and not act as a welfare state that encourages patronage.

I must have visited the United States over three hundred times in my 51 years on this planet, and what never ceases to amaze me is the way the average American thinks. There is a can-do attitude which is steeped in innovation and daring. There is hardly any room for conservative thinking or too much caution. I once asked Arun Sarin, the very successful Indian-born CEO of Vodafone what he thought of the United States, and he told me it was a land that allowed the mind to be unfettered and where success for migrants largely depended on where they landed in the US because it was inextricably linked to the kind of education you could then avail of.

There must be a reason why the United States is home to a Google or an Apple or even a Microsoft. Land and climate are superficial factors: what is critical is the kind of place you really want to be. Where you encourage out- of-the-box thinking and allow people to do crazy things: a society that permits insanity of the intellectual kind will always score higher than the rest. What is equally impressive about the United States is their marketing prowess. From painting a former ally like Bin Laden as the world’s most evil prospect, to merchandising the American elections and creating a global market for films made in English, Americans inject marketing into everything because marketing is essentially about inventing desire. Which is why few people know that Häagen-Dazs is not a European brand but an American one, or, for that matter, that yoga was not begun in America but in India.

In many ways, the Modi visit will be of significance to both Modi and America. For the first time, Americans will meet a Prime Minister of India who fought the General Election in a highly presidential style. They will also meet a man who is not in awe of the US but knows it makes for a fine partnership. On his part, Modi will be like a child in a candy-store when he sees the manner in which nationalism is marketed within the United States. Where there are many who will fight over every trivial issue, but when it comes to the American Cause, there is no partisanship. Perhaps Modi will be at home in a country that has often made the medium more inventive than the message, and in that lies future hope.

My advice to Modi will be: this is a new United States that you are seeing. It may still be the dominant global economy, but is not the great moral authority it was under Franklin Roosevelt. It also has a president who like Modi was and remains a great orator, but when speeches are over, real work is demanded of leaders by those who they govern.

Finally, Modi must stay on a charm offensive. Americans are always good on the optics. They read through visuals. For them, imagery is what fuels their passion and their insights. Modi would do well to speak Mahatma Gandhi’s idiom but to see America through Google Glasses.