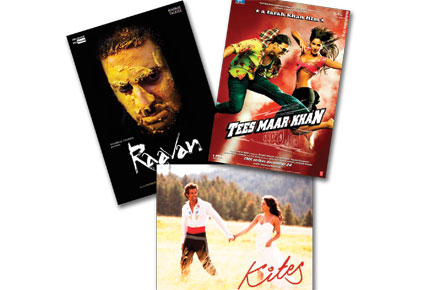 Cinematically at least, 2010 ended with a whimper. I was sad for hours  after seeing Tees Maar Khan. The film, and its cheerful embrace of all  that is moronic and mediocre, seemed emblematic of all that had gone  wrong with Hindi cinema through the year: big stars, zero script; an  almost cynical disregard for the audience’s intelligence; proposals  rather than films; profit rather than passion. But one of the  requisites for being a film critic is optimism. Each week, we go into  theatres, disregarding the week before.

In the last decade, the Hindi film industry has gone from strength to strength. Profits have boomed; viewers have  multiplied; Brand Bollywood has amplified. Hindi cinema is everywhere—from the Sundance film festival to theatres in Poland and Germany.  However, despite the success, the rising global profile and the  increasing chances of getting caught, Bollywood filmmakers continue to  happily plagiarise. So Aakrosh is Mississippi Burning, Knock Out is Phone Booth, Guzaarish has shades of The Sea Inside and Tees Maar Khan is After the Fox, which is written by Neil Simon. The day before  release, director Farah Khan announced that rights had officially been  bought, but apparently the paperwork was done so late that the credits continue to read: ‘story by Shirish Kunder’. Stealing is criminal and  unspeakably tacky. Hopefully more filmmakers will opt for the official  route and buy rights.

Stars are by design, seductive. We bask in  their beauty and prowess. But even the Gods need scripts to stand strong. In 2010, Bollywood’s biggest and most beautiful—from Hrithik Roshan and Akshay Kumar to Aishwarya Rai Bachchan and Ranbir Kapoor—were felled by bad writing. While zero face-value films from Udaan to Love Sex aur Dhokha to Phas Gaye Re Obama proved that the script is  the star. Hopefully, like the long-lost brothers of Manmohan Desai  films, stars and scripts will finally find each other this year.

Anees Bazmee’s No Problem hinged on the timely fart of a fake gorilla. Watching that scene, I wondered: could this be the end of civilisation as we know it? Crass, cacophonous, low-brow  cinema in the guise of comedy is not funny, it’s exhausting. The dimaag- nikaal-ke-dekho concept is passé. Viewers have little desire to leave their brains at home when they watch movies. Hopefully, filmmakers and Akshay Kumar will comprehend this and respond immediately.

The green-lighting of projects at Bollywood corporates is an enduring mystery. Who at Eros, I wonder, read the  script of Anjaana Anjaani and deemed it worthy of making? Who at UTV decided that Rs 60 crore was an appropriate budget for the story of a quadriplegic who wants to kill himself? Who at Reliance Big Pictures  decided to pay Hollywood director Brett Ratner a rumoured $2 million to recut Kites (Incidentally, the Kites Remix grossed about $41,000 in the US). Allah tero naam, one of my favourite bhajans, includes the  line: ‘balwaano ko de de gyan.’ The strong must be wise. Hopefully, the  films of 2011 will reveal this.

The best film of the year, Udaan, and the most successful  film of the year, Dabangg, had one thing in common. Both were made by debutant directors. In fact, 2010 was the year of the debutant—names  that made a splash include Anusha Rizvi (Peepli Live), Abhishek Chaubey (Ishqiya) and Maneesh Sharma (Band Baaja Baarat). Hopefully, new, original voices will continue through the new year.

Hopefully, 2011 will be a year of passionate engagement at the movies.  I look forward to being surprised, stirred, seduced and transported. Happy viewing!