On the Kumbh Waterfront 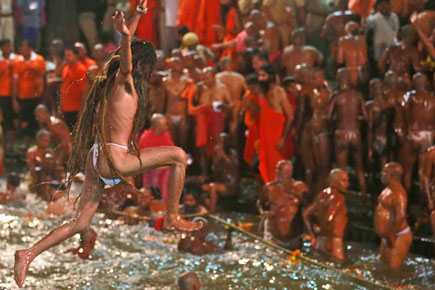 Atheists might not agree or participate, but even they have to see some merit in religious festivals. There is, for instance, a social value to them, the reaffirmation of a sense of community. Up to the middle of the 80s, before television invaded and took over the drawing rooms of Indians, when the festival of Ganesh Chaturthi would be celebrated over 10 days in Mumbai, there would be movie screenings at pandals in the evenings and entire neighbourhoods would coalesce, old men and women carrying stools to sit on. It doesn’t happen now and the city is poorer for it. Peaceful communal gatherings are a good idea and, if they happen in the garb of religion, then so be it.

But it is hard to keep a good thing good, and when it comes to religion, impossible to draw any lines in this country. Right now there is a Kumbh Mela happening in Nashik and, while it might be nowhere near the scale of the one at Allahabad, it has enough hordes of sadhus, sanyasins and photographers to make a quorum. The administration is stretched keeping order and hygiene, but that is true even when Kumbh Melas don’t happen. As much as Rs 1,000 crore is said to be spent on this festival and even that is tolerable because the money, after all, circulates in the economy. There is however a ritual, a usual one otherwise, that offers a mirror this time of how pernicious religion can be.

In the Nashik Kumbh, there are three days of shahi snan, when a dip in the waters of the river Godavari is considered to be especially holy. If millions decide to get together for a bath, then the river must have the water and flow to manage it. The government’s response is to release waters from an upstream dam. Here it gets problematic. Maharashtra is going through one of its worst droughts in recent history and water is becoming a precious rationed commodity. You can live without taking a dip in the river, but you cannot without drinking it, or, if there is none to irrigate fields, then you will run out of food too. The state has a policy that prioritises the use of water, and religious rituals justly find no place in it. The government therefore has no business wasting these waters to appease pilgrims. This is what an economics professor, HM Desarda, has argued in a public interest litigation and the Bombay High Court has found merit in it. Two thousand million cubic (TMC) feet of water have already been released for the first two shahi snans. One TMC more was earlier slated for release for the third shahi snan when the court decided to step in and asked the government to reconsider.

Obviously the possibility of any reconsideration is non-existent. To politicians, meddling in a religion’s communion with God means permanently estranging an entire vote bank. Drought and farmer suicides can be more easily managed. Right now, a party vehemently agitating for drought relief in Maharashtra is the Nationalist Congress Party whose leaders are accused of corruption in irrigation projects. They can create droughts and protest against it too. Some of them will probably also be taking a dip in the Kumbh Mela.