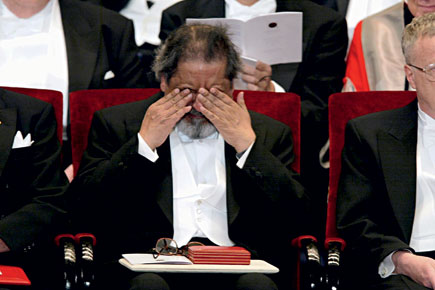 
I was twelve or perhaps thirteen when, for reasons I find difficult to recall today, I picked up a copy of The World According to Garp. A few days later an officious grandaunt happened to be visiting. Pornography, she declared, as soon as she caught sight of the book in my hand. A distant memory, but resurrected by Girish Karnad’s outrage at the lifetime literary award given to Naipaul at the Mumbai LitFest.

It seems to me that Karnad shares my grandaunt’s views on literary criticism. I have read his recent diatribe against Naipaul several times over. I still remain unsure of his objections. Even so, I’ll try and summarise them to the extent they make sense to me.

Karnad agrees that Naipaul is a great writer, “Apart from his novels, only two of which take place in India and are abysmal, Naipaul has written three books on India and the books are brilliantly written—he is certainly among the great English writers of our generation.’’

His problems are of a different nature, “…what strikes one from the very first book—A Wounded Civilization—is their rabid antipathy to the Indian Muslim.’’

What struck me (or should I say what struck one) is that Karnad seems to have conflated Islam and Muslims. The distinction is important. In 2002, a French court found the controversial writer Michel Houellebecq not guilty of inciting racism by calling Islam “the stupidest religion”. A piece in The Guardian went on to note, ‘Houellebecq, a reclusive writer whose eccentric work and lifestyle are the subject of intense literary and social gossip, argued in his defence last month that criticising a religion did not mean he was insulting its followers. He said all three monotheistic religions—Christian- ity, Judaism and Islam—were based on scriptures that were “texts of hate”.’

‘Houellebecq told the judges that he had never despised Muslims but felt contempt for Islam.’

Despite the controversy that followed his remarks, Houellebecq was awarded France’s top literary honour, the Prix Goncourt, in 2010. If I understand Karnad, that should also count as a mistake.

Karnad goes on to argue that Naipaul does not comprehend medieval India (assuming there is one correct way of comprehending medieval India) because he is tone-deaf, “If you don’t respond to music, then you can’t respond to Indian history because the real development of Indian culture has been through music.”
“This is one problem with Mr Naipaul’s analysis of Indian culture. He has no music and therefore no conception of what Muslims contributed to our history…”

“This explains his insensitivity to the intricate interweaving of Hindu and Muslim creativities, through the Bhakti and Sufi movements, that gave us this extraordinary heritage, alive in the heart of every Indian home.”

I happen to be tone-deaf, so I actually am indifferent to Karnad’s exposition of the wonders of Indian music, but one way of looking at medieval India is precisely to consider what was not achieved. While the Renaissance was unfolding in Europe and extraordinary developments in science were taking place, Akbar was busy with Din-i-Ilahi and Shah Jahan was obsessed with getting the Taj Mahal built.

As a Sikh, despite my tone-deafness, I am heir to the extraordinary heritage Karnad makes so much of. The music that Karnad speaks of is played daily in the vast majority of Sikh households, yet a great number of Sikhs continue to harbour extreme views of Muslims. The problem with the syncretic vision that Karnad sets so much store by is that it can coexist with the most extreme form of bigotry. Naipaul suggests some answers to this dilemma when he points to the wounds of history. Again, I do not entirely agree with him, but he is asking the right questions. Karnad’s response to this question seems to be to bury his head in sand and listen to Raga Malhar (for those with a factual bent of mind, it is now possible to do so, thanks to headphones).

With Naipaul, what counts for me is not the answers he offers, but the observations he makes, the questions he poses. Questions that concern us in modern India, such as what lies behind the resentment that fuels the Hindu Right, questions that have no answers in the limited framework Karnad offers.

Having dismissed Naipaul as a bigot, condemned him for tone-deafness, Karnad then levels another serious charge, “As for Naipaul’s journalistic exploration of modern India, mainly in the form of a series of interviews conducted with Indians right across the board, one must confess they are supremely well written and that he is a master in drawing sharp and precise visuals of the people he talks to and of the places he visits.”

“What begins to bother one [that ‘one’ again] after a while, however, is that he invariably seems to meet brilliant interviewees whose answers to his questions are expressed with a wit and elegance that match his own mastery of the language. Even half-literate interviewees suffer from no diffidence in their expression.’’

Karnad is referring to India: A Million Mutinies Now, but he never substantiates his charge. Rather, in a sleight of hand, he refers to a letter written to him by Ashok Chatterjee, the subject of a chapter in Naipaul’s A Wounded Civilization. According to Chatterjee, Naipaul’s essay was “a scenario that could have been, but was not what he actually saw. Fragments of reality, selected and put together, into a collage of pure fantasy”.

Similar charges had also been levelled at Ryszard Kapucinski, who, it turns out, collaborated with the secret service in Poland during the Soviet years. So, I guess, as far as Karnad is concerned, no prizes for Kapucinski either.

This, then, is the vision of literature Karnad and his cheerleaders are espousing, no different from what my grandaunt had in mind when she did not want me to pay heed to anything that could offend, unsettle or disturb. The vapidity of the Indian literary scene lies exactly in this consensus. The quality of writing does not matter, what counts is whether the writer holds appropriate liberal views, keeps the right company and behaves himself publicly. We must take a stand against a Naipaul, a Houellebecq or a Kapucinski, not because each is not a good writer, but because each is not a moral figure. The converse is also true, I see little virtue in a number of those who have sprung to Naipaul’s defence only because they find an echo of their own stupidity in his public performances.

In a recent piece in New Statesman on the art of the essay, Ed Smith quotes the conclusion of Hugh Trevor-Roper’s essay on Thomas Hobbes, ‘That his psychology was inadequate, elementary and wrong is an irrelevant objection. The function of genius is not to give new answers, but pose new questions, which time and mediocrity can resolve.’

This applies in good measure to Naipaul. Even where Karnad claims he is at his worst, in his early India book, he asks questions that are obvious only in hindsight. Why, for instance, is it that Indians cannot detect shit even when they are knee-deep in it? Karnad’s answer seems to be that they are too busy listening to music. I prefer the question.