Of Mountains, Monks and Munsel-ling 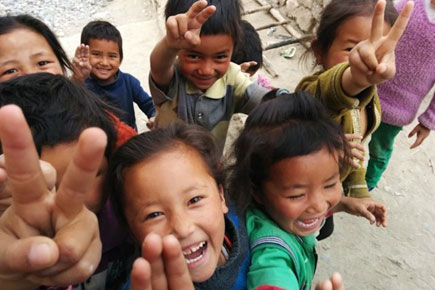 At one point in her life, Tenzin Angmo must have felt that her options were shrinking rapidly. She was 18 years old, in Class 12, studying science and hoping to eventually become a doctor. But her father died unexpectedly, and she could not clear the medical entrance examinations. It was a setback – one that could have taken her life in an entirely different direction.

It was then that the Venerable Tashi Namgyal stepped in. A Buddhist monk who had moved away from ascetic life, he had become General Secretary of the Rinchen Zangpo Society for Spiti Development – the first non-governmental charity established in the Spiti valley, a remote area of Himachal Pradesh 3,700 metres high up in the Himalayas. Tashi Namgyal had set up the school where Tenzin received her education, and also arranged for her to study in Dharamshala and prepare for the medical examinations. Now he was ready to advise, comfort and support Tenzin – but, most importantly, not let her give up.

With financial assistance from international donors, Tenzin took a year out, sat for the examinations again, and cleared them. She became the first girl from the Rinchen Zangpo Society’s education programme to study medicine, completing her course in 2013 from Dr Rajendra Prasad Government Medical College, Tanda, Himachal Pradesh. Tenzin is now working in a government hospital at Tabo in the Spiti valley, just a few kilometers from the village where she grew up.

Tenzin’s story is an even greater achievement than we may at first believe. Before the establishment of schools by the Rinchen Zangpo Society, no young Spitian passing through the government schooling system in the valley had ever qualified to study engineering or medicine. In fact, the Spitian performance in the Class 10 Board examinations in Himachal Pradesh was so poor in the 1990s that only one or two students from the entire valley each year were even able to clear these examinations. Higher education remained an impossible dream.

For many years, the Spiti valley had remained little-known – almost forgotten in India – both geographically and politically. Naturally cut off by great mountain barriers and by a long winter with temperatures plummeting to -30 degrees Celsius, Spiti became more isolated still when its close economic and cultural ties with Tibet were abruptly severed by the Chinese takeover of that country in 1959. From then on until 1992, the entry of even Indians to Spiti was restricted due to its proximity to the Tibetan border, only some 40 kilometers away.

The Spitian people lacked quality education – a difficulty exacerbated by economic disadvantage, an unreliable power supply, and issues in communicating with the outside world. The government schools in the valley stuck to mainstream Indian education – the teaching of the Spitians’ own language, Bhoti, a dialect of Tibetan, and the region’s unique contribution to trans-Himalayan Buddhist culture, was minimal. School-leaving children were barely able to read even the titles of Buddhist scriptures, leaving them feeling disconnected with the millennia-old religion and traditions that have been thriving in the ancient valley. This was a culture and a people under threat.

Munsel-ling School in the village of Rangrik, established in 1996 by the newly formed Rinchen Zangpo Society with the help of Swedish charity SOIR IM, represented the Spitian community’s response. Children across Spiti and the adjoining valleys of Lahaul and Kinnaur were welcome to attend the school, regardless of their financial background. Parents who could afford to make a small contribution towards their child’s education did so; the children of those who could not, studied for free.

The Spitian people were gradually realising the need for modernity, but on their own terms; the importance of developing a local pool of talent, skills and learning, but rooted in the philosophy and altruism of the Buddhist tradition; and the value of being represented in government positions across the state and finding their voice. Munsel-ling therefore became the first English-language school in the entire valley, in recognition of the elixir for success in education in modern India – knowing English. It also placed importance on teaching Bhoti to students of all classes, along with Spitian music and dance. The students today are well known across the valley for their cultural talents, and are regularly invited to perform at Kye monastery and other venues on festive days. Inaugurated and named by the Dalai Lama, the school’s name has proved prophetic: Munsel-ling, the light that dispels the darkness of ignorance.

Tenzin Angmo attended Munsel-ling School, but remarkable though her story is, it is far from being an exception. The 18-year investment in the school is now beginning to pay off: former student Pema Dolker has been accepted to study for an MA in Sociology at Jawaharlal Nehru University; Tsewang Tobgyal has gained admission to medical college in Tanda; Tashi Tsomo is reading for a BSc in Mathematics at Miranda House; and Tenzin Chhoerup completed his MSc from the Forestry and Horticulture University in Solan, and has joined a national bank as an agriculture officer. Five former Munsel-ling students studying nursing in Delhi have recently qualified and are now completing their practical training. These successes, particularly for women, are breaking new ground in the entire history of the Spiti valley.

As an English teacher and volunteer at Munsel-ling, teaching students aged between 12 and 16, I see everyday how aware the older girls are of the future, and how most of them plan to study further and carve out a working life for themselves. This is seen as a natural extension of their current education, and not as something unusual. Becoming a doctor is a popular ambition among both boys and girls, no doubt in part due to the respect that is afforded to this career choice within the Spitian community, but also because there are now role models to look up to. It is still an arduous ambition, but no longer an impossible dream.

These nascent aspirations relate to the long-term developmental model promoted by the Rinchen Zangpo Society. Instead of having a top-down approach common to external agencies that have little understanding of the culture or requirements of a community, this Society is a charity born out of the needs of the local people and its vision is long term. One of the greatest challenges Munsel-ling faces is the high turn-around of teachers, in part due to the harsh Spitian winters and its remote location. The Society therefore plans to grow its own – out of the students who pass out each year from Munsel-ling, several go on to train as teachers, and the Society hopes that one or two will come back to Munsel-ling to teach. Already, there are a few teachers in the school who are also alumni.

The people of Spiti valley recognise what it is like for a community to survive under threat. Due to the long and historic connections with Tibet at a time when national borders were immaterial, many Tibetans sought refuge and a new life in the valley after the Chinese takeover of their country. Munsel-ling has a small and tight-knit community of such Tibetans who are now qualified teachers. Their stories of escape, told in a matter-of-fact everyday tone making light of hardship, are extraordinary: hiding in caves to escape the Chinese during the day and making their way over to India by night. Their parents and other family members still live across the border, and the Tibetan teachers speak to them over the phone, but most have not been able to meet their families for over 15 years.

Munsel-ling buzzes with the stories of its 550 students and 35-odd staff. Living and teaching here has meant that I am becoming more and more accepted by the people in the school and the village of Rangrik, and stories about their lives flow more easily over cups of chai or bowls of delicious laping. The villagers nod and smile and greet me in their traditional way – “Jule, ji.” The children call out to me as I pass – “Ma’am Diya! Are you going swimming in the river today?” I look at their smiling carefree faces and know one thing for certain: with a mentor like Tashi Namgyal and the opportunities provided by Munsel-ling, there will be many more Tenzin Angmos. Many more stories of quiet determination and achievement.

More by the author

Diya Gupta
Diya Gupta is a freelance journalist and writer based in the UK. She is currently volunteering for six months as an English teacher and fundraiser at Munsel-ling School, Spiti valley, Himachal Pradesh.