Of Conversion and Reversion

The religious dichotomies that explain the Hindus’ homecoming 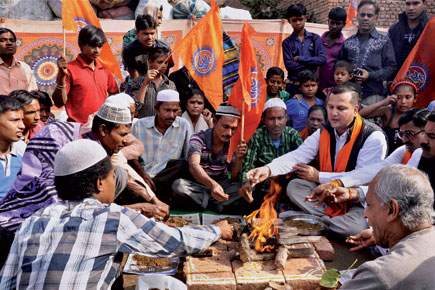 The religious dichotomies that explain the Hindus’ homecoming

Religious conversion is a vexed topic and has been so throughout the ages. Nevertheless, our understanding of it can be advanced if we look at it through a series of dichotomies, for when viewed thought the prism of these, its various aspects gain some measure of coherence.

The first such dichotomy is that between what have been called ‘missionary religions’, as opposed to non-missionary religions. When the list of various religions of the world—such as Judaism, Christianity and Islam; Hinduism, Buddhism, Jainism, and Sikhism; and Confucianism, Daoism and Shinto, for instance—is drawn up, one is left with the impression that, as religions, they might be entities with more or less the same features in a sense. This is true, for they would not be called religions if they did not share some features, but in a sense it is also misleading, because their individual distinctions tend to get downplayed when they are all looked upon as ‘religions’ and therefore as possessing similar features. Precision is the price one pays for pattern, so to say. One such feature on which they differ is that adherents of some religions feel they are under an obligation to spread their message to others and convert them, while those of other religions do not feel that they have been placed under such an obligation by their teachings. Those which feel that they must spread their message are called ‘missionary religions’, of which Christianity and Islam are the main examples. Judaism has also been a missionary religion during some phases of its history, according to scholars, but is usually considered a non-missionary religion. The point is important, as it indicates that religions can sometimes change their position in this respect, which suggests that these are not set in stone. Nevertheless, the contemporary reality is that Christianity and Islam are the world’s two major missionary religions, which between them claim half of humanity as their followers, with Christians numbering over two billion and Muslims over a billion of a global population of approximately six billion. These religions try to convert the followers of non-missionary religions to their own faith, thereby generating the phenomenon of religious conversion.

The reader will notice that I have not included Buddhism among the missionary religions above, although many scholars do so. The reason underlying my coyness is that although Buddhism is indeed a missionary religion, it possesses a feature which distinguishes it from Christianity and Islam as missionary religions. When one converts to these two religions, one is supposed to break from one’s previous religious past and then substitute Christian or Islamic beliefs and practices for the old ones, which are now abandoned. Buddhism, however, does not insist on such a break and conversion to it need not entail the abandonment of one’s religious past. In other words, we have another dichotomy here, between those religions which require one to abandon one’s previous religious loyalties upon conversion, and those which do not.

These two dichotomies point to a third—relating to how the followers of one religion view those who lie outside their charmed circle. One can view those outside one’s own religion as the other; that is, as someone different from one, who has to be brought within one’s circle. However, one could also view those outside one’s religion as another; that is, like oneself and as someone holding his or her own beliefs and practices just as we hold our own. The other, different from us, is unlike us and has to be made like us; another, although different from us, is also like us, and need not be made like us but is someone with whom we can share what we have, and who may want to partake of what we have, and to that extent become like us. The sense of religious difference is highlighted when the one outside our religion is treated as another. If we connect this dichotomy with the previous one, then we could say that Christianity and Islam treat those outside their fold as the other, while Buddhism treats them as another. It will be clear that more respect is accorded to the other party if the other party is treated as another rather than as the other.

Our respect for the religious dignity and integrity of the other person, however, may be such that we might not consider it appropriate to make the other person an object of missionary activity at all—for when we make a person the object of missionary activity, we imply that the other person, as matters stand, is religiously ‘inferior’ to us in some sense, if we treat that person as the other; or in need of being the beneficiary of what we possess, when we treat him or her as another, as in the case of Buddhism. If then we treat the other as just another, like us, this situation will not generate any missionary impulse of the kind associated with Christianity and Islam, and even with Buddhism. Hinduism is a primary example of this attitude. Also, several other religions of Chinese origin, Confucianism and Daoism, share the same feature, as does the religion of Japan, namely Shinto. Other religions which share this attitude are Zoroastrianism and primal or tribal religions.

Let us take stock of the argument so far. We identified a dichotomy between the missionary and non-missionary religions to begin with, and then introduced the dichotomy between the other and another, refining the latter further into that between another and just another. These dichotomies helped us traverse the field of world religions from Christianity and Islam, through Buddhism, to Hinduism and various other religions that share the Hindu attitude of not being missionary. For historical reasons, Hinduism has come to represent the non-missionary position par excellence, as it is the one religion among various non-missionary religions which has had to bear the brunt of the missionary religions of Christianity and Islam more intensely and comprehensively, with the possible exception of tribal and primal religions. These religions, however, are largely small-scale and oral in their orientation, while Hinduism had to and was able to encounter first Islam and then Christianity on a massive scale and with a literate tradition as well. It had also to deal with the missionary expansion of Buddhism earlier.

Given this historical background of Hinduism, let us probe its interaction with the missionary religions in the hope of gaining further insights into the phenomenon of religious conversion.

The first major missionary religion it encountered was Buddhism and this encounter enables us to identify another dichotomy, that between exclusive religious identity and dual or multiple religious identity. Judaism, Christianity and Islam provide classical examples of exclusive religious identities. Although all of them believe vehemently in one God and one God alone, yet one cannot be a Jew, a Christian and a Muslim at the same time. It is clear that conversion will have to be undergone if one changed one’s religious identity in such a set-up. By contrast, other religions may not possess the same sense of sharp boundaries separating them. In Nepal, for instance, a person responds in the affirmative when asked whether he or she is a Hindu and whether he or she is comfortable with the idea of possessing a dual religious identity. It is obvious that ‘conversion’ will not be a major issue in cultures where dual or multiple religious identities is the norm, and was never a major issue in the encounter between Buddhism and Hinduism in India.

The encounter of Hinduism with Christianity adds another wrinkle to this situation. Both Hinduism and Islam, despite their differences, are holistic religions which do not distinguish between the religious and secular domains of life sharply, the way Christianity does. Thus we encounter another dichotomy: conversion between religions which take a holistic view of life and do not distinguish between religion and culture the way some religions like Christianity do. So when a Hindu converts to Christianity, he or she not only converts to another religion, and to another exclusive concept of religion, but to a religion with its own view about the relationship between the religious and the secular dimensions of life.

This brings us to the last of the dichotomies I intend to identify in this effort to understand the phenomenon of religious conversion. This is the dichotomy between ‘conversion’ and ‘reversion’.