Obituary of an Indian Spacecraft

And why Switzerland does not send probes to the Moon 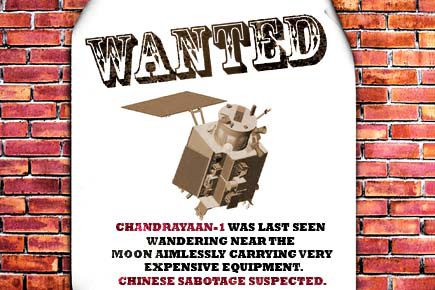 And why Switzerland does not send probes to the Moon.


The benefits of inferiority complex are immense. Without that, male nationalism is not possible. And there would be no Indian space programme. A nation whose children die of starvation every day but still found Rs 400 crore to spend on a lunar orbiter to study moon soil is clearly a nation that is in pursuit of emotion, not truth. Nothing wrong with that. We are all in the pursuit of emotions and a nation has the right to behave like people. But less than a year after launching Chandrayaan-1, we have now lost radio contact with it. The spacecraft is lost. It is now called debris. Our Rs 400 crore is going round and round the moon right now. After all, it is a lunar orbiter.

There is some confusion around whether we planted our flag on the moon or we placed it. In November last year, shortly after the launch of Chandrayaan-1, a Moon Impact Probe was released from the orbiter, which landed on the Moon. Several newspapers and TV channels reported that the Probe then ‘planted’ the Indian flag. As if a robotic arm stretched out from the Probe and pierced the lunar surface with a flagpole. The Indian Space Research Organisation (‘In Service of Human Kind’) has always maintained that it ‘placed’ the flag. The truth is that the flag was flung at the Moon at about 5,000 km an hour. Actually this is not entirely true either. There was no flag. The image of the Indian flag was painted on the sides of the Probe, which is a box as large as your old TV and it weighed 30 kg on Earth. When the Probe crashed on the Moon, Isro said that it had ‘placed’ the Indian flag on the Moon. Only the fourth country to do so after the US, Russia and Japan. The European Space Agency, too, has landed on the Moon, but did not leave a flag behind because its machine did not represent a brotherhood of people circumscribed by an imaginary line.

Chandrayaan was a consequence of ‘a vision’ seen by our elf-like former president APJ Abdul Kalam. It is astonishing how many visions that man has. He must be arranging them as main visions and peripheral visions. He was worried that other countries may colonise the Moon before us and believed that we must investigate the potential to mine lunar minerals before we lose the opportunity. Soon after the spacecraft was lost, Madhavan Nair, the chairman of Isro, issued a terse statement in which he declared the Moon mission a success even though it was meant to transmit data for another one year. He said “95 per cent” of its job was done. How did he know it was 95 per cent successful and not 80 per cent or 60? Was he being mathematical or was he being metaphorical? When we express abstract nouns in percentages, aren’t we usually bullshitting? Is Mr Nair like us? Needless to say, the Chinese were not convinced by his 95 per cent. Chinese news agencies gleefully declared the Indian moon mission a failure. Quoting Indian scientists who probably do not exist, the Chinese media inferred that India was not yet competent to mine the Moon or go to Mars, and that if we send a man to the Moon, that guy may not be coming back.

That we are only the fourth nation to land our flag on the Moon is a cause of much pride to many Indians. We would like to believe that this is because only four nations could achieve the feat. That is not true. If Switzerland really wants, it can send a machine around the Moon and drop its flag on the lunar surface. It’s just that Switzerland is probably not that interested in spending good money on such an exercise. Then how can India justify it? Scientists would point out that while feeding children is important, expanding our understanding of the universe is as important and even as humane. But the question here is the real objective of Chandrayaan. A nation where people eat grass to survive may still have the right to spend crores to understand the Moon better. But if its objective was national pride and it probably was nothing more than that, it was a cruel mission and there should be no Chandrayaan-2. Midgets may want to stand tall, but they must understand that they cannot, no matter how much money they spend on the aspiration.