The fragmented Naga polity is looking set for a possible power sharing scenario. India would do well to stay out of the way of the proceedings. 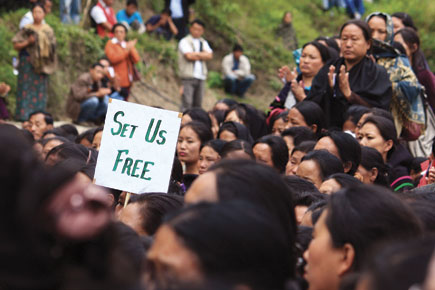 The fragmented Naga polity is looking set for a possible power sharing scenario. India would do well to stay out of the way of the proceedings.


It  was nice to see a lady in Mizo attire leading the Indian contingent at the opening ceremony of the Commonwealth Games this past Sunday. As Mizoram is more or less a done deal, a lady in one of several traditional Naga attires may have, even as a token gesture, sent a message.

It’s a tricky time in Nagaland. India is playing at peace with the largest Naga rebel group, the National Socialist Council of Nagalim (Isak-Muivah), now thirteen years into a ceasefire. India entered into a ceasefire with a rival faction led by SS Khaplang in 2001, but has not commenced formal talks with it. I’ve heard wiseacres in India’s security community say there isn’t any need, as India has played off these bitter rivals since a split in 1988, encouraging the Khaplang group to keep at bay the formation led by Isak Chishi Swu and Thuingaleng Muivah. And with the passing of this ageing leadership, rebels will fracture.

The phrase ‘playing with fire’ comes to mind.

Even tied down, I-M has impressive firepower: several thousand cadres, and weaponry sourced from the grey markets of neighbouring Myanmar and Southeast Asia. Its rivals are similarly armed. Recruitment continues. It is no secret that I-M runs a parallel administration in large parts of Nagaland—the Khaplang take up the slack elsewhere in the state—and also influences politics and administration in the contiguous Naga-dominated districts in Manipur and Arunachal Pradesh. It is no secret either that individuals and businesses in Naga regions pay tax to “national workers” of one or more faction.

Some security analysts maintain that the Indian Army could steamroll Naga rebels any time it wants. Thing is, they tried for decades, even co-opting Assam Rifles and the paramilitary. Torture, rape and killing of civilians in retaliation for attacks by rebels were common. It didn’t work.

Nagaland was bribed with statehood in 1963. That didn’t work. The Shillong Accord of 1975 was to have solved the Naga rebellion once and for all. It became worse. Steamrolling will only renew a cycle of violence and bolster Naga aspirations for separateness in the Subcontinent—what Angami Zapu Phizo and his colleagues demonstrated by declaring Nagas independent from India on 14 August 1947, a day earlier than India’s own independence from Great Britain.

While Nagas have been upset with India at some point or the other, they are upset too with the brutality that resurfaced most recently in 2007 and 2008, when outraged citizens marched in several towns to protest a mini-war between I-M and a fresh breakaway.

This sparked a remarkable development. For over two years the Forum for Naga Reconciliation, a group comprising church leaders and elders of tribes, among others, has worked to get the factions to talk. From several meetings in Chiang Mai in northern Thailand, these have now moved to Nagaland. On 18 September Muivah met, among others, N Kitovi Zhimomi, his counterpart in the Khaplang faction, in Dimapur. This would have been unthinkable even a year back.

Equally unthinkable not too long ago would have been the unanimous resolution adopted by the Nagaland Assembly in November 2009. Urged by Chief Minister Neiphiu Rio, the Assembly, including opposition Congress MLAs, acknowledged that the underground movement had “selflessly worked, fought and sacrificed for the aspirations and the rights of the Nagas, and also to those who continue to follow the tradition of selfless sacrifices for the common cause of Nagas”.

Besides reaching out to various rebel factions, it seemed like preliminary groundwork for future power sharing within the Naga construct—should unity among factions come about, and later, ceasefire turn to peace. The message also implicitly reached out to Nagas in Manipur and Arunachal Pradesh.

All of this is yet to be, but the point is: the Naga people are deciding their future. India will need to keep its establishment egos away, and work to keep Nagas as friends. It could have happened in 1947.