Here’s my take on bands that have a body of work worth investing time and money in, and if they’re playing in your city, ensure that you catch the show. I’d trade my Buddy Guy pick to be a first-time listener of their music 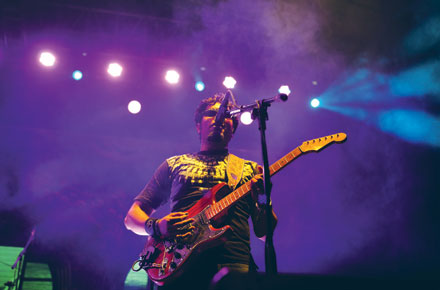 Not everyone is inclined to attend or pay for a music festival ticket (average of Rs 3,000), even though festivals are usually the best place to watch some of the country’s best talent perform. Despite numerous publications dedicating space to alternative bands in the country, I know for a fact that there’s a long way to go before these artists come into the spotlight. Here’s my take on bands that have a body of work worth investing time and money in, and if they’re playing in your city, ensure that you catch the show. I’d trade my Buddy Guy pick to be that person who is listening to all these bands for the first time.

Indian Ocean: While those who have listened to the band over the years and have witnessed lineup changes, especially the exit of its guitarist Susmit Sen, will be able to point out the shift in sound, the band ensures that they assure the crowd a fantastic time regardless of what unfolds backstage. I’ve seen the band bounce back after the loss of their founding member, vocalist and tabla player Asheem Chakravarty, in 2009. If you had to pick up one album, try Kandisa, which was released in 2000, as an introduction to the band. It includes two of their biggest concert hits: Ma Rewa and the title track Kandisa.

Indus Creed: Those who have seen the transition from Doordarshan to MTV in the country should know this rock band from Mumbai, which was known as Rock Machine back in the 80s. I recently met a bunch of 20-year-olds who hadn’t heard of the band, and considering the band has stayed relevant both on the gig circuit and on the studio recording front (they released their last album Evolve in 2012), this came as a bit of a surprise. Indus Creed, helmed by vocalist Uday Benegal and guitarist Mahesh Tinaikar, is one of the finest partnerships known to Indian rock. Begin your Indus Creed playlist with Trapped, Rock N Roll Renegade and Pretty Child, of course.

Thermal and a Quarter: They describe their music as ‘Bangalore rock’. Since 1996, the band has written songs that ever so smoothly blend jazz, rock and blues influences and draw from life in their home city. There are tracks such as Brigade Street, long before it turned into a tourist spot lined with cafes, and Meter-Mele-One-And-A-Half, a take on the city’s auto-rickshaw drivers who demand a fare higher than the meter at the risk of losing passengers. Even if you haven’t heard any of their older work, their latest album The Scene is a great place to begin. It’s a spot-on view on the current state of the Indian alternative music industry, right from MEDs, which slams the dance music rage across the world, and I’m Endorsed Are You, a gutsy shot at musicians who are less inclined to hone their skills and more favourable towards raking up endorsements in return for free equipment.

Soulmate: The band from Shillong comprises the best blues musicians in the country and has been a regular at the Mahindra Blues Festival, one of India’s biggest events that celebrate the genre. Keith Wallang, Soulmate’s lead guitarist, and Tipriti Kharbangar, its vocalist, are the band’s backbone, firing up the most popular blues clichés you may have heard. I’m partial to Shillong, that interprets a Khasi song Sier Lapalang, from their breakout album called Shillong, but their latest release, Ten Stories Up, is much more polished and indicative of how much the band has evolved.

Pentagram: Unfortunately, the band is on an indefinite hiatus, which is a loss for those who’ve never seen them perform. The electro-rock band from Mumbai may have started out being influenced by American bands such as Rage Against The Machine and Brit electro-rockers The Prodigy, but found their own sound with albums such as It’s Ok, It’s All Good, released in 2007. Pentagram was formed in 1993 and took a little over a decade to establish themselves, but like most other bands on this list, they stuck it out. Their last album Bloodywood is my favourite and possibly the best introduction to their sound.