Six new Indian crime writers to read, if you want to get your hands dirty 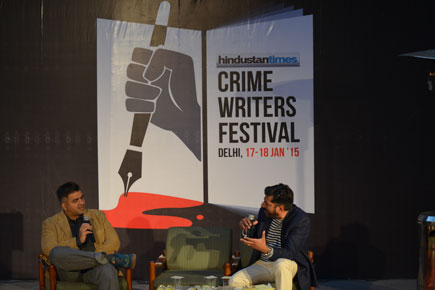 “Kill quickly and kill more.” “There has to be body horror.” “Crime writing is mathematical and cerebral.” “Put a corpse on the first page.”

Just a sample of how some of the new Indian crime writers describe the rules and regulations of their genre. Every author present at the Hindustan Times Crime Writers’ Festival held from 17-18 January, had their own vision of what constitutes and does not constitute a crime novel. A crime novel be racy and filled with twists, it can be slow and steady and build up to a cliff-hanger; a mix of both or neither at all. And writers like Ashwin Sanghi, Zac O’Yeah, Tarquin Hall, Hussain Zaidi, Amrita Chowdhury and Kalpish Ratna (Kalpana Swaminathan and Ishrat Syed, who write together under this pen name) have begun to write and find a homegrown audience who wants every variety of it, over the last decade or so.

Ashwin Sanghi, clearly one of the bigger stars (some may remember his Twitter account trending recently), has written a couple of bestsellers including The Rozabal Line (2007), Chanakya’s Chant (2010) and The Krishna Key (2012), and his latest book Private India–written in collaboration with American author James Patterson–is already creating waves in the international market. On crime writing, Sanghi says, “If you’re writing a crime thriller, put the corpse on the first page, or at least in the first chapter,” something that found resonance among most of the speakers present at the festival. Sanghi’s books are usually based on historical and mythological themes.

Swedish author Zac O’Yeah known for comic thrillers like Once Upon a Time in Scandinavistan (2010) and Mr Majestic! (2013), calls himself a Bangalorean as he has been living in the city for over a decade. He charmed an audience with his wry sense of humour, a trait he shares with fellow Swedish author Håkan Nesser. “You can download my books from pirated sites but do read them,” he quipped. O’Yeah says his eponymous protagonist from Mr Majestic!, (Hari Majestic) is “a lot like how I imagine an RK Narayan character would be in a crime world”. Mr Majestic! is about a reformed tout and how he solves the mystery behind the disappearance of a tourist; through it, O’Yeah captures the pulse of local residents and the way things work, or don’t in cities.

Any ardent reader of crime fiction is familiar with the bumbling Punjabi ‘private investigator’ Vish Puri (VP), who loves his food and solving even the smallest of crimes which take place in and around his ‘very Delhi’ neighbourhood. Tarquin Hall is the author of the VP series, which lists four books thus far, including The Case of the Missing Servant (2008) and The Case of the Deadly Butter Chicken (2012). Hall, who began writing because he wanted to write about India, said, “I thought it would be really fun to kill someone at a laughing club so they could die laughing”. He is referring to how one of the characters in The Case of the Man Who Died Laughing (2010) dies in a fit of giggles, when a Hindu goddess appears from a mist and plunges a sword into his chest.

If you haven’t read Black Friday (2001), you haven’t really read Hussain Zaidi, who has written so many bestsellers on the underworld that Sandeep Unnithan, fellow speaker at the festival, said, “There is a saying among gangsters: you haven’t arrived in Mumbai underworld if Hussain Zaidi hasn’t written a book about you.” His book–which was made into a film of the same name, directed by Anurag Kashyap–will have you breaking into a sweat, learning of the events that lead to the 1993 Mumbai blasts. At his session with Unnithan, Zaidi, also the author of From Dongri to Dubai (2012), said, “For the Indian government, it is very convenient to have Dawood in Karachi. That way they can blame everything on him.” His latest book, titled Byculla to Bangkok (2014) focuses on Chota Rajan, Arun Gawli, Ashwin Naik, and how they turned into names to reckon with, in the Mumbai underworld.

Anagrams are always fun to play around with. And when you have two paediatric surgeons who’re also writers, you can expect some medical fun. Kalpana Swaminathan and Ishrat Syed, famous as Kalpish Ratna, have written what we could call medical thrillers, more recently The Quarantine Papers (2010). Their latest book–Room 000: Narratives of the Bombay Plague (2015)–is set against the ravages of the 1896 bubonic plague in Bombay. Commenting on the needless body horror–ruthless beheadings and dismembered limbs–some people love to write about, Syed said, “We are living amidst body horror. It’s part of our DNA. We as surgeons open body horror everyday and correct it. For me, the gore on television is laughable.” For Swaminathan, it was the basic desire to ‘know more’ that led to them penning their latest book. “India is the place for medical thrillers for our medical history is so poorly documented, it has to be excavated,” she says. The duo said they began writing to “bring science into the living rooms of Indians and make science accessible”.

Cyber crime and cyber bullying is a relatively new concept in terms of the grave impact they can have on an entire population that is eager to share each living and breathing moment of their lives with the world. Author Amrita Chowdhury, who has penned crime thrillers such as Faking It (2009) (set in the world of fake contemporary art, wherein the reputation of an art gallery owner is at stake) and Breach (2014) (on the muddled online world and breach of cyber security), spoke about the ‘many shades of grey’ in the cyber world. “We’re now sharing everything online. You can be practically anyone online. And as a writer, you can’t really take a righteous stand. In the online world, a crime can be committed without even touching a body,” she says.